What Flag Should Yiddish Fly? 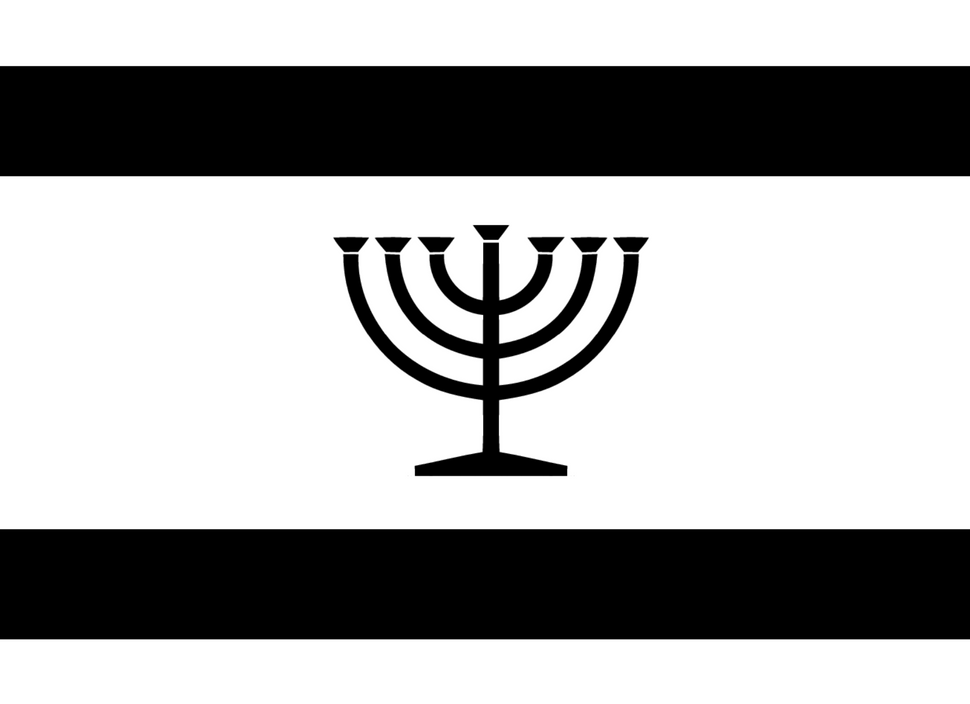 In mid-2012, I received a friend request from “Yiddish Flag,” a fictional image that purported to be the flag of Yiddish language and culture. Not in the habit of accepting requests from anonymous non-humans, I clicked “reject” without a second thought. Yet the flag, a black-and-white banner featuring a menorah on a stylized tallis (prayer shawl), kept creeping up on the Internet, eventually securing the top spot in any Google image search for “Yiddish flag.”

Now thanks to the imminent launch of a Yiddish course on the popular site Duolingo, the so-called “Yiddish flag” may yet become the most readily visible representation of “Yiddish” itself on the internet. Before that happens, though, it behooves Duolingo and its users to understand the highly problematic symbolism behind this artificial banner.

Duolingo is perhaps the most beloved and most visited of the many sites on the internet where one can now learn foreign languages for free. When the development of a Yiddish course was announced a few months ago, the response from the site’s devoted community of users was as immediate as it was exuberant. One user even enlisted her grandfather in thanking the course’s contributors (Full disclosure: My wife, Asya Vaisman Schulman, Director of the Yiddish Language Institute at the Yiddish Book Center is one of these contributors).

Shortly after the announcement, the question was raised: How should Yiddish be visually represented on the site? Other languages have their national flags, but Yiddish, without a state to call its own, has no “national flag.” Users quickly stumbled on the image mentioned above and several of them began urging the banner’s use as Yiddish’s main emblem. Listening to their constituents, Duolingo has already used the flag once in its promotional materials, suggesting that it may soon bring it onto the site’s main page. Given Duolingo’s popularity, such a move would undoubtedly catapult the flag to even greater visibility and legitimacy.

At first glance, the picture’s success is quite understandable. Pulling from an existing repertoire of Jewish signs, it does indeed look like a plausible symbol. With its funereal coloring, however, it does exactly the opposite of what any flag is supposed to do. Instead of instilling pride in the people it claims to represent, the grim color scheme implies only mourning for Yiddish, rather than its celebration. The popular discourse that Yiddish is a dead language is widespread, but, of course, flatly false.

The “Yiddish flag” is most recognizable due to its obvious and uncanny resemblance to the blue-and-white flag of Israel, itself modeled on the Jewish prayer shawl. Indeed the “Yiddish flag” looks like an inverted Israeli flag, an attempt perhaps to somehow make Yiddish “equal” to Hebrew. This creative maneuver speaks to the close relationship between these two languages, but by linking Yiddish to the history of Zionism, it obscures the fact that Yiddish was once the victim of intense discrimination in Israel. Victims of the need to “negate the Diaspora,” Yiddish speakers were often seen as inherently subversive to the new national project in Hebrew. Yiddish cultural institutions and publications were, with few exceptions, forbidden and the language’s users were mocked as weak, abnormal, and inauthentic Jews. To use this menorah flag, to “make Yiddish equal” to Israel and Hebrew only ignores this hurtful history. Acknowledging the real and enduring symbols of Yiddish culture and folklore as legitimate emblems would be a step in healing these wounds.

The origins of the so-called “Yiddish flag” are unclear, although it appears to be the work of a single individual who created the image and its associated websites around mid-2011. All photographs of the flag in the real world can be sourced back to this one user, making their claims suspect to say the least. No references to the flag can be found before this date and any such references that have appeared have been debunked and deleted. Another active group of concerned online citizens, the users-cum-fact checkers of Wikipedia, tagged and removed the page for “Yiddish Flag” for these very reasons.

What is clear is that no Yiddish-speaking community has ever used this or, more to the point, any other flag. On the left, Yiddishist groups of the early 20th century largely eschewed nationalism, rejecting its traditional symbols, such as flags, instead flying the banners of multiethnic states and universalist ideologies. On the right, Hasidic groups use Yiddish as a marker of insularity, a way to disavow secular society and all of its trappings, flags included. Contemporary culture makers of what has been dubbed “post-vernacular” Yiddish represent a virtual community par excellence, one inherently transnational for whom a flag would be extraneous. In short, the use of a flag, any flag, for Yiddish, would not only be ahistorical, but also offensive.

In order to market its Yiddish course, Duolingo needs a graphic that will capture the imagination of potential users. Flags are usually useful shorthand for the languages and cultures they represent. In this case, however, the image is not to task, alluding to a history and rhetoric at odds with Yiddish and its speakers.

Instead of a flag, a symbol from Yiddish culture’s extensive palette would be more appropriate. The golden peacock is one such option. A mythic beast with centuries as a proud, resplendent symbol of Yiddish creativity, this bird supplies quills to the language’s writers, and inspires the culture’s actors, musicians, and poets. This is an easy sell, something visual and attractive to this same devoted pool of users. It is this, an emblem of light and life, rather than the mournful banner above, that will spur users to learn the language, and, surely, this is what we’d like to see first the next time we google “Yiddish”.

Sebastian Schulman is the Director of Translation Initiatives at the Yiddish Book Center and a PhD candidate in Jewish History at Indiana University.

What Flag Should Yiddish Fly?