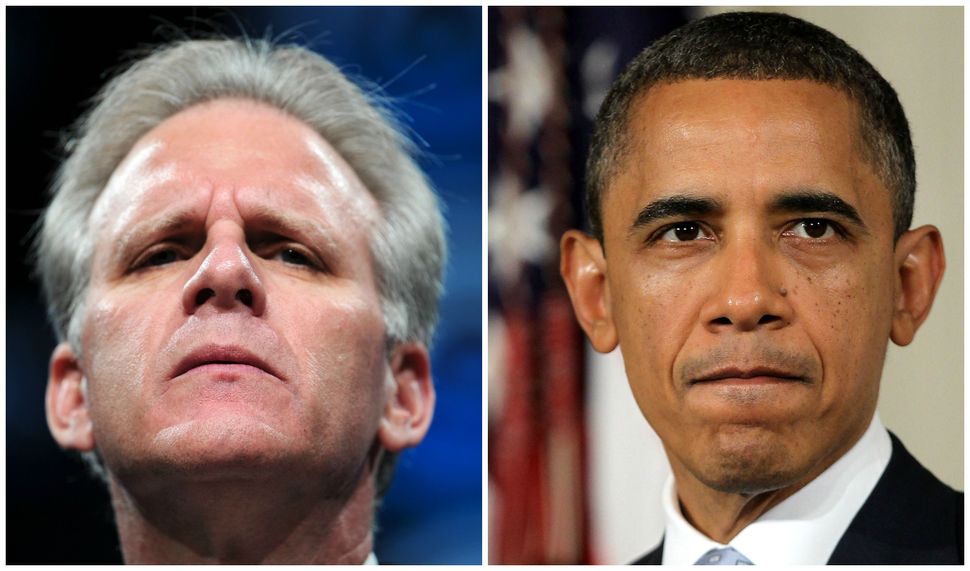 Michael Oren has a new book to sell — a memoir called “Ally” about his years as Israel’s ambassador to Washington. To maximize sales, the former diplomat is apparently willing not only to blow up what remains of the very fragile Obama-Netanyahu relationship, but also to further divide the American Jewish community over its relationship with Israel.

Over the past week, Oren has accused Barack Obama, in a widely circulated , of having deliberately undermined the alliance between Israel and the United States. He has said that Jews who intermarry lose their empathy for Israel. And he has speculated that Obama suffers from a daddy complex as a result of having been abandoned by two Muslim fathers. This Muslim daddy complex, Oren speculates in a piece for Foreign Policy, explains why Obama’s Middle East policy is overly conciliatory toward the Muslim Arab world.

The damage so far: Oren’s once-warm friendship with Dan Shapiro, the affable and very diplomatic U.S. ambassador to Israel, is now icy cold. Abe Foxman, the national director of the ADL, urged Oren, in a press release posted on the ADL website, to walk back his remarks about Obama, which he called “unjustified and insensitive.” And Moshe Kahlon, the head of Oren’s own Kulanu party, sent a letter to Dan Shapiro in which he expressed his appreciation for Obama. Kahlon stressed that Oren’s remarks did not reflect his views.

In his Foreign Policy piece, Oren offers his analysis of how Obama’s character and worldview were formed, and how his background affected his Middle East policy: Because the president was “abandoned” by two different Muslim fathers, he now seeks the approval of all Muslims.

Oren is an historian, of course, and historians often try to analyze the backgrounds of historical figures in order to understand their motivations. Which is why we know that Kaiser Wilhelm of Germany was self-conscious about his withered right arm and, we are told, tried to compensate for his weakness with militarism. We also know that John F. Kennedy was a pathological womanizer, though no one has ever implied that his extra-marital dalliances affected his judgment during the Bay of Pigs.

But Oren’s speculation about Obama is neither academic analysis nor professional psychoanalysis. It is cheap gossip. And it is predicated on his ideologically driven belief that George W. Bush, Obama’s predecessor, pursued a Middle East policy that was better than Obama’s. Given the current mess in Afghanistan and Iraq, both countries that were invaded by the U.S. under Bush, Oren’s underlying assumption is dubious at best. It’s about as logically inconsistent as another implicit claim Oren makes in his piece — that Israel’s settlements are necessary for her security.

“While reiterating America’s support for Israel’s security, Obama stridently criticized its settlement policy in the West Bank and endorsed the Palestinian claim to statehood,” writes Oren. Well, yes. The Obama administration opposes Israel’s settlements in the occupied Palestinian territories. As has every single U.S. administration since 1967. And why shouldn’t Obama endorse Palestine’s claim to statehood? It is, after all, the cornerstone of the two-state agreement that we’re all supposed to want, right? Of course right! Or, perhaps not so much in Oren’s case. Which would explain why he found favor in Netanyahu’s eyes.

It is difficult for normal people with integrity and a conscience to believe that anyone, let alone a former diplomat, would torpedo diplomatic friendships, undermine the American Jewish community and take aim at U.S.-Israel bilateral relations out of pure avarice. But it is also difficult to believe that a man who has a PhD in history from Princeton University, and who spent years in the diplomatic arena, would think it remotely appropriate to indulge in cheap anti-intellectual speculation about a president’s relationship with his daddy as a means of explaining his foreign policy.

If that’s not enough for Michael Oren, then I know of a few books about entitlement that he should read. They can be found in the “self help” section of his local bookstore.