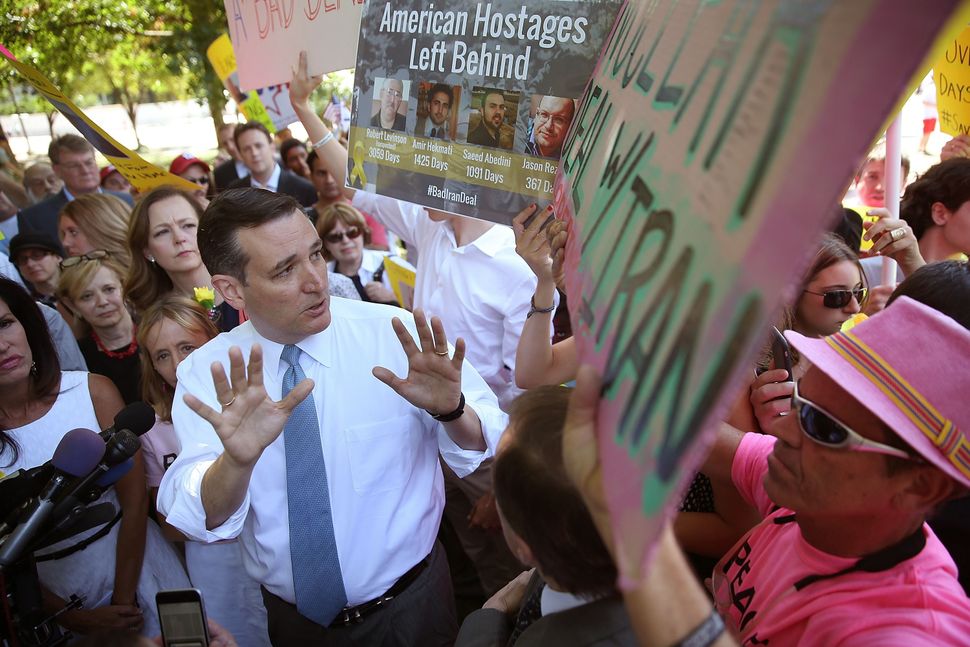 Insiders say that mainstream American Jewish organizations are coalescing around opposition to the P5+1 Iran nuclear deal and will work hard to get 13 Democratic senators to give Republicans a veto-proof majority to reject it.

Ultimately this would be a self-defeating strategy. But however one feels about the agreement, there are ways to have a better Jewish debate about it.

First, both proponents and opponents of the deal have their wing nuts, all of whom deserve to be ignored. On the left, these are the rosy-eyed optimists who think this is the beginning of a new era for Iran. If we’re lucky, and the infusion of global capitalism empowers moderates, this may indeed turn out to be so. But more likely this is a deeply flawed deal with a bitter enemy.

On the right the wing nuts are either warmongers who prefer, in John McCain’s words, to “bomb, bomb, bomb, bomb Iran” regardless of the human and political cost, or know-nothings who call deal-backers “naive,” or Islamophobes who say that “the Muslims are all the same.”

But neither right nor left are defined by their wing nuts. On the right, reasonable people are sincerely anxious about the deal because it enriches Iran and empowers it to support Hezbollah, Hamas and other sources of terror. They argue that a stronger diplomatic hand could have produced a better agreement, and that the risks of this one are too high.

On the left, plenty of non-naive, reasonable people (including Israeli security hawks) say that this deeply flawed deal with a bitter enemy is, in fact, the best of many bad options.

What to do, then? Is there a way forward for a Jewish community divided on this issue? Yes, if we can draw some boundaries.

First, let’s clear out the wing nuts. Anyone who uses words like “naive” or “warmonger” should be excluded from consideration. Such dismissive language only shows that the person using it hasn’t been listening to what moderates on both sides are saying.

Anyone who traffics in Pamela Geller-like stereotypes should be ignored as well. Amazingly, one still sees, in Jewish newspapers, claims that the “Arabs” or “Muslims” are “all the same” — that Hamas equals the Islamic State group equals Iran. In fact, a primary reason for the Iran Deal is so that Shiite Iran can explicitly help the United States fight Sunni ISIS extremists. That may or may not be a good idea, but it certainly gives the lie to the puerile notion that “they’re all the same.”

There are many reasons to oppose this deal, but reactive thinking is not one of them. That’s true on the right (“They’re monsters”) or the left (“We’re all one world together”).

Finally, it’s no use trying to turn back the clock. Whether the real cause of this mess was the Bush/Rumsfeld War in Iraq — which conveniently removed Iran’s greatest adversary without peacefully redrawing the Middle East — or the Obama administration’s feckless foreign policy — waffling in Syria, backing the wrong people in Iraq, appeasing in Ukraine — we’re now reaping what we’ve sown with a bold Iranian regime and unenthusiastic allies in Russia and China.

Either way, it’s too late. Blame whoever you want, we are where we are. Now the deal is here. We must engage with the moment we have.

Within these parameters, the open questions become expert questions: debates around whether a better deal could have been struck, and whether even no deal is better than this deal. By “expert questions,” I mean questions that require specialized knowledge of Iran and global politics, not Sabbath-table pontificating or knee-jerk reactions.

To their credit, many Jewish organizations are indeed taking their time before responding, evaluating evidence and arguments. I am concerned, though, by what I have heard from several insiders about the evolving consensus to oppose the deal. My concerns are threefold.

First, having read a sheaf of opinions, I have yet to see a credible alternative to this deal. Michael Oren, for example, has provided an excellent assessment of its flaws. But he provides no evidence for his claim that a “better deal” could have been achieved. He argues that Russia and China would have maintained sanctions to get American business — omitting the small fact that America also needs Chinese business, and couldn’t possibly boycott one of the world’s largest economies. And the fact that no nation has ever capitulated after purely economic sanctions.

After claiming that the lifting of sanctions will enable Iran to arm itself to the teeth, Oren then about-faces and says that Iran has “1970s-vintage weaponry,” and so a “credible military threat” would have made them yield more. Really? What about America’s need for an ally against ISIS? What about the threats already made? What about the collateral costs of military action?

And the notion that Iran would accept a deal involving “no more mass chants of ‘Death to America’” and other desirable “changes in its behavior” is entirely unfounded. Show me one successful treaty that includes such provisions.

Oren’s piece is but one example. Let’s grant that the deal is deeply flawed, that Iran is an enemy and that Israel’s direct enemies will be enriched by the deal. Show us a better option. Indeed, the existing deal already is a better option than previous iterations: Most of Netanyahu’s fears were not realized, and many of the moderate Washington Institute’s conditions were met. This is as good as we’re likely to get.

Second, this deal is meant to do one thing. In Leslie Gelb’s words, it allows for “slowing [Iran’s] climb toward nuclear weapons, not instantly settling steamy Mideast problems.” But now much of the opposition is about Iran’s support for terrorism in the region. That is a real problem, but not one addressed by these negotiations. Bringing it up now feels like bad faith — perhaps because the agreement was actually [better than Netanyahu had predicted.

Meanwhile, remember Benjamin Netanyahu’s ticking bomb? That’s what this agreement was supposed to be about. Of course, according to Netanyahu’s calculation, that bomb should have gone off by now. But he wasn’t entirely wrong: If no deal is reached, Iran will have a nuclear weapon soon, sanctions or no sanctions. No deal equals Iranian bomb. Is that better than a bad deal?

Finally, there are the costs of opposition. The American Jewish and Israeli Jewish assessments of the deal are not identical. This makes sense: Israel stands to lose much more, and to gain less. Its interests, and its risk-benefit analysis, are different from America’s. That’s just math.

But the Institutional Jewish Community decision to go “Israel First” — that is, to support Israel’s risk-benefit calculation rather than America’s, is troubling. Even without anti-Semitic canards of dual loyalty, it does make us seem disloyal. And for good reason: Jews are disproportionately swayed by Israel’s interests, because many of us love Israel, visit it and have friends and relatives living in it. Which is why we should be exceptionally careful to distinguish our feelings from a balanced political calculus.

There are other costs as well. Opposition to the deal solidifies the newly partisan nature of support for Israel, long a goal of the Republican Jewish Coalition (which now can deliver more Jewish votes to the GOP) and long a terrible development for Israel itself. And it’s a lose-lose. If the IJC loses, the Jewish community has further lost clout and lost face. If the IJC wins, the optics are that the Jews control Washington, and Netanyahu beat Obama. Either way is bad.

The best approach is the one Eric Yoffie, the former president of the Union for Reform Judaism, recently set forth in Haaretz: Complain, support and strengthen. Complain that this deal is risky and flawed. Support it, grudgingly, as the best one possible, and in America’s interests. And then strengthen Israel, strengthen the monitoring regime, strengthen Iranian moderates, strengthen those fighting Iran’s proxies in Lebanon.

And, as former Shin Bet head Ami Ayalon told the Forward, “there are no perfect agreements.”

Exactly. As is usually the case in the Middle East, the people sounding the most certain are actually the least informed. The American Jewish community should choose ambivalence.