Just How Deeply Split Is Jewish Public on Iran Deal? 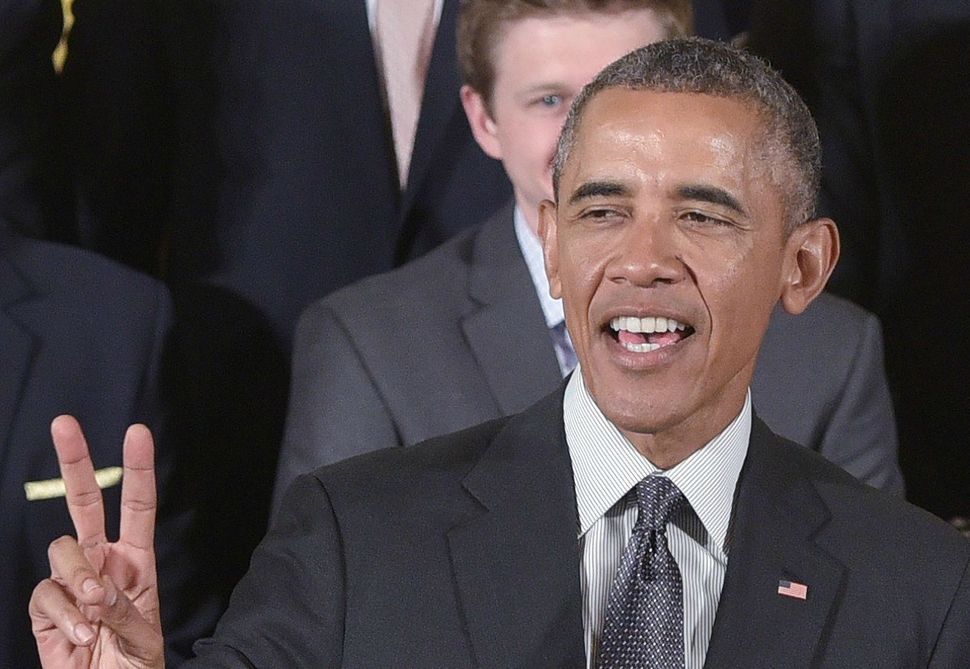 Looking at the public opinion polling on the Iran nuclear deal over the past few months, it shouldn’t surprise you to learn that there are some sharp differences — among Americans in general and among American Jews in particular.

What might surprise you are the differences between the surveys themselves. It seems a slight difference in the way the same question is phrased by perfectly reputable polling organizations will produce polls with completely different results.

Most intriguing of all is how much the surveys actually can teach us when they’re superimposed on each other, like layers of map transparencies. Once they’re combined, the surveys reveal aspects of America’s view of the Iran agreement that aren’t apparent from any single survey when viewed by itself.

What we’ll find is that both American Jewry and America overall are fairly evenly split on the merits of the Iran deal — but that support for the deal is surprisingly soft among Americans at large, while among Jewish Americans, it’s the opposition that’s softer and weaker than immediately apparent.

Start with the contrasting surveys. Two polls that came out within days of each other in September show Americans overall leaning either 51% to 47% in favor of the deal or 21% to 49% against. The first was conducted by the Washington Post-ABC News polling operation; the second is from the Pew Research Center.

Two other polls surveyed American Jewish opinion a few weeks apart during the summer. They show the deal is favored by a margin of either 51%-47%, per the American Jewish Committee, or 48%-28%, according to the Los Angeles Jewish Journal.

So which is it? Are Americans slightly in favor of the deal or firmly against it? Are Jews split evenly or solidly in favor? They can’t all be right, can they?

Actually, they can. It depends on how you ask the questions. Indeed, each variation sheds a little more light on the overall picture. For starters, it turns out that when Americans are asked simply whether they favor the nuclear deal that America and other nations reached with Iran, the response is strongly negative. But when they’re told something about the deal beforehand, the favorability rises. And the more information they’re given, the more the favorability rises.

Not that Americans are naïve about Iranian intentions. Follow-up questions show strong skepticism about whether Iran will comply and whether America and Israel will be more secure. And yet they’re clearly in favor of trying, as we’ll see.

Interestingly, this added-information effect doesn’t seem to hold true for Jewish opinion. Jewish favorability remains roughly the same — 51% in one poll, 48% in the other, within the margin of error — regardless of whether or not the pollster describes the deal before asking for an opinion. It could be that Jews are following the issue more closely than their neighbors. It’s also possible that other factors are at work.

Secondly, let’s note that information isn’t the only variable shaping the response in the poll. There’s also a dramatic difference between polls where the respondents are asked a simple yes-or-no question — do you favor the deal or not? — and polls where they’re asked whether they feel that way “strongly” or just “somewhat.” When they’re forced to give a simple yes or no answer, there’s a sharp increase in the proportion who say they don’t know enough to form an opinion. And this variable has a dramatic impact on the final result.

In the Pew survey, pollsters brought up the Iran deal by asking respondents what they’d heard about “negotiations between the United States and Iran on Iran’s nuclear program”: a lot, a little or “nothing at all.” Thirty percent said “nothing at all.”

Pew didn’t enlighten them. The next question was: “From what you know, do you approve or disapprove of this agreement?” The replies: 21% approve, 49% disapprove and 30% volunteered that they didn’t know or didn’t want to say.

The Washington Post-ABC News poll approached it very differently. The sample was broken into two groups, and they were asked two different versions of the question. One group got some bare bones information, though more than the Pew respondents got. The other group got slightly more detailed information.

Specifically, one group was asked: “As you may know, the U.S. and other countries have announced a deal to lift economic sanctions against Iran in exchange for Iran agreeing not to produce nuclear weapons. Do you support or oppose this agreement? Do you feel that way strongly or somewhat?” Opinion was divided, 45% for (24% strongly, 21% somewhat) to 44% against (32% strongly, 12% somewhat).

The other group got the same question, but with this sentence added: “International inspectors would monitor Iran’s facilities, and if Iran is caught breaking the agreement economic sanctions would be imposed again.” This group was more favorable: 51% favored the deal, 41% opposed it. In both cases, about 10% gave no opinion.

In the other WashPo-ABC poll, where more information was given about inspection and enforcement, support was higher. Here’s how it looked: the 51% support broke down to 31% strongly and 20% somewhat, while the 41% opposition came to 35% strongly and just 6% somewhat.

What does that show us? First, notice that both WashPo-ABC subgroups had a consistent 20% who were “somewhat” supportive of the Iran deal. Add the 10% who had no opinion and you get 30% — the same percentage that told Pew they had no opinion. The sizeable “don’t know/refuse” group in the Pew poll and the combined “somewhat supportive” and “don’t know/refuse” in WashPo-ABC are the same people. It appears that giving respondents a “somewhat” option caused a sizeable group to drift hesitantly from “don’t know” into the support column. If their only choices were yes or no, they balked.

By contrast, “strongly” supportive in WashPo-ABC appears to be equivalent to “supportive” in the Pew poll. It was that group — the committed supporters — that rose as information increased: from 21% in Pew to 24% in the first WashPo-ABC to 31% in the second.

Now, notice what happens to opponents of the deal: the numbers of those who were “somewhat opposed” dropped from an already minor 12% to a minuscule 6% as information increased. Their decline contributed to rise in support, but difference is so close to the margin of error that they can’t be considered a significant factor in the overall result.

On the other hand, the “strongly” opposed group actually rose from 32% to 35%. In effect, piling on more facts to bolster the liberal case made the committed opponents dig in their heels.

The two surveys of Jewish opinion offer us the same two variables: with or without information, and with or without a “somewhat” option. The effects are the same, but the results are quite different.

The American Jewish Committee survey had no information attached to the question, similar to Pew, but offered “strongly” and “somewhat” choices, like WashPo-ABC. The question put to respondents was: “Recently, the U.S., along with five other countries, reached a deal on Iran’s nuclear program. Do you approve or disapprove of this agreement?” The results were 50.6% approval (16.4% strongly, 34.2% somewhat) versus 47.2% disapproval (27.4% strongly, 19.8% somewhat). The total, 94.4%, suggests that just under 5.6% didn’t offer an opinion.

The Los Angeles Jewish Journal survey was the reverse: It gave information on the deal to respondents, like the WashPo-ABC poll, but like Pew it had no “somewhat” option — just approve or disapprove.

Here’s the Jewish Journal question: “As you may know, an agreement was reached in which the United States and other countries would lift major economic sanctions against Iran, in exchange for Iran restricting its nuclear program in a way that makes it harder for it to produce nuclear weapons. Do you support or oppose this agreement, or don’t know enough to say?”

The Jewish Journal and AJC results look wildly different at first glance. One is a statistical tie, 50.6% to 47.2%. The other is a lopsided approval, 47.8% to 27.6%. But if you apply what we’ve learned, the two polls are nearly identical. Both show an approval rate of around 50%. Both show a committed disapproval rate of just over 27%. And both show an unstable group of about 20% that registers disapproval when “somewhat disapprove” is an option, but floats out when that option isn’t offered and joins instead with a 5% “no opinion” group for a total of 25%.

Here’s what those numbers show: First, the added information offered to respondents by Jewish Journal pollsters had no statistical impact on approval, which is just above or below 50% in both survey.

Second, and perhaps more significant, Jewish population, like the population at large, has a floating group of about 20% that joins with the “somewhats” when that’s an option but retreats to “no opinion” when uncertainty isn’t an option. But the floaters in the Jewish population go in and out of disapproval, while the floaters in the general population go in and out of approval. Thus supporters of the deal among Americans at large form an uncertain, unstable group that’s either tied with opponents or well below, depending on how you ask. In the Jewish population, it’s the opponents who form an unstable element, tying the supporters or falling well below depending on how you ask that same question.

Just How Deeply Split Is Jewish Public on Iran Deal?