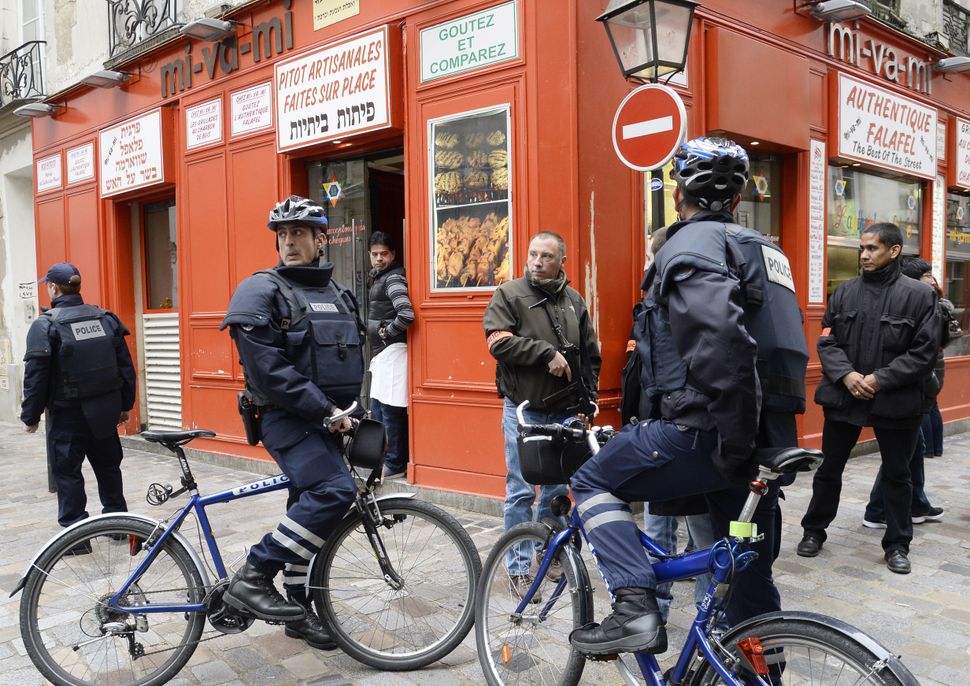 It was late at night in central Paris. A group of Jews were enjoying themselves in their popular meeting spot, the Gamin de Paris, a café in the longtime Jewish quarter of the Marais. At about 11 PM, between 50 and 100 thugs, many of them Muslims, showed up to make trouble. Carrying Billy clubs, sticks and guns, the attackers threw objects through the café’s open door, ransacked the place and fired shots into the air. With some help from a group of Jews recently organized to watch for such incidents, the Jewish clients in the café managed to hold off the attackers until French police arrived. The incident was contained.

This altercation occurred just this month — 80 years ago, that is, in September 1935. If you assumed that the event was recent, and that it was one more case of the Middle East conflict fueling Muslim-Jewish hostility across much of the world, especially in France, then that’s understandable. Read the American, European and Jewish press these days and you might well conclude that newly arrived Muslims in France are waging war against Jews and that it is a proxy struggle for the Israeli-Palestinian conflict.

Yet the reality is very different: Jews and Muslims have been interacting in France for a century now, and their relations have never been based simply on the vagaries of the Middle East conflict.

When we see Jews and Muslims simply as enemies, we not only erase history, but also make conflict harder to overcome. Instead, we should explore the legal, political, economic and cultural contexts that have shaped Jewish-Muslim relations in specific times and places.

As I show in my new book, , Jews and Muslims in France have often interacted as something other than members of mutually hostile ethno-religious communities. They have been citizens and foreigners, political allies and opponents, fellow musicians or athletes, neighbors, friends and even lovers.

At the very moment of the above-mentioned attack, only a few blocks to the south in the same neighborhood of Paris, small numbers of Jewish and Muslim immigrants from Algeria, Morocco and Tunisia were creating pockets of North African culture. In 1937, an Algerian Jew named René Moïse Gharbi opened a café named the Petit Marseillais. Many disfigured North African veterans of World War I, Jewish and Muslim, passed their days there, bonding over war stories and enjoying the common cuisine and ambiance of their native lands. On Saturday nights the Petit Marsaillais sometimes hosted musical soirées, where Muslim and Jewish musicians and dancers would regale a mixed audience with Arab music into the wee hours of the morning.

At the same time, darker political currents were coming to the surface. The thugs who showed up to attack Jews at the Gamin de Paris were from a group called the Solidarité française, one of several quasi-fascist leagues that emerged in France in the 1930s. These ultra-nationalists often treated Jews as the enemies of France, and tried to turn Muslims against them. (Efforts to divide the two groups for political gain remain a hallmark of far-right politics in France to this day.)

Meanwhile, growing numbers of Muslim migrant workers from Algeria — the crown jewel of France’s empire — were beginning to demand independence from colonial rule. Since 1870, most Algerian Jews had enjoyed French citizenship but Algeria’s Muslims were, with rare exception, colonized subjects. The struggle over Algeria’s future increasingly drove Jews and Muslims into opposing political camps. Colonialism and its legacies have arguably proven as potent a source of Jewish-Muslim conflict in France as the battle over Israel/Palestine.

In the decades since the 1930s, France’s Jews and Muslims have continued to interact in a rich variety of ways. Still today, there are neighborhoods in France like Sarcelles and groups like the Judeo-Muslim Friendship association that show there is nothing inevitable about Jews and Muslims becoming enemies. Where tension does exist, its causes cannot be mechanically reduced to the Israeli-Palestinian conflict.

Our mistaken assumptions to the contrary are the product of several 20th century developments. These include the Zionist-Arab conflict, but also at least three others: 1) the acceptance of the idea that the world must be organized into nation-states and that these states have the right to define who belongs and who does not; 2) decades of brutal violence by colonial oppressors and anti-colonial resisters; and 3) the resurgence of both religious extremism and militant secularism.

To understand the forces defining the present, we need to transport ourselves back into a series of moments from the past, where Jews and Muslims perceived their allegiances and encounters as more fluid than fixed. Even today, as with the riot at the Gamin de Paris café 80 years ago, both Muslim-Jewish violence and friendly relations can occur in the same spaces. Internalizing that truth will prove vital in determining the future of both peoples.

Ethan B. Katz teaches history at the University of Cincinnati. He is the author of “The Burdens of Brotherhood: Jews and Muslims from North Africa to France” and the co-editor of “Secularism in Question: Jews and Judaism in Modern Times.”