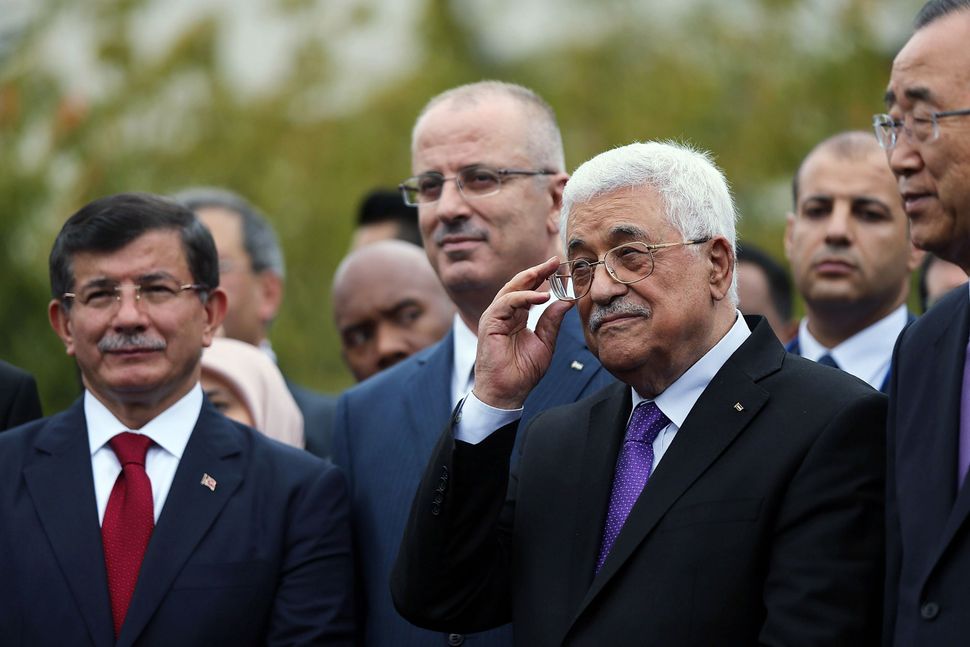 Looked at from one perspective, you couldn’t find a better illustration of the dynamic that’s run Israeli-Palestinian peace efforts into their current ditch than the mudslinging that passed for Palestinian diplomacy at the United Nations at the end of September and the tone-deaf response of Israeli officialdom.

From another perspective, though, the September 30 U.N. speech by Palestinian Authority leader Mahmoud Abbas might be seen as something more substantive: the latest in a series of canny maneuvers aimed at boxing Israel into a corner and forcing it to negotiate from a position of weakness with a Palestinian state founded on the most unpalatable terms.

There’s a third possibility, of course: That Abbas’s speech is intended mainly for the viewers at home in the West Bank, to demonstrate toughness and boost his sagging approval ratings. But that perspective ignores the fact that his poll numbers go up and down from year to year, but his annual U.N. speech remains pretty much the same.

Abbas regales the General Assembly every September with variations on a stock speech. The routine combines vitriolic accusations of Israeli wrongdoing — some genuine, some highly exaggerated, some utterly fanciful — with touching appeals for peaceful Israeli-Palestinian coexistence. Some years he goes long on the coexistence and eases up on the vitriol. That was the case in 2013, at the height of Secretary of State John Kerry’s peace talks. This year, by contrast, was particularly long on the vitriol and light on the peace talk.

Alongside vitriol and peace-talk, there’s a third element to Abbas’s stock routine, and it was particularly noticeable this year: His annual threat of some new unilateral action on the international front to isolate Israel while embellishing the trappings of Palestinian statehood. In 2011 it was applying for admission as a U.N. member-state. In 2014 it was calling for a U.N.-imposed deadline for Israeli withdrawal to the pre-1967 lines. This year it was threatening to cancel the Oslo Accords, the 1993 Israeli-Palestinian agreement that created his Palestinian Authority.

None of the threats ever overcomes the U.S. veto in the Security Council, which is the only U.N. body authorized to make firm decisions and take action. Bit by bit, though, Abbas’s annual threats, declarations and gambits are adding up to a body of precedent that may yet confront Israel with a changed reality in the international arena, and ultimately on the ground. This year’s threat is particularly telling, because it doesn’t require U.N. approval. To annul the Oslo Accords, all he has to do is say so.

Annulling the accords could take several forms. He could stop participating in individual aspects of the agreement, like security or telecommunications coordination. He could begin shutting down particular elements of Palestinian self-government, whether sanitation or mail delivery. Or he could simply dissolve the Palestinian Authority and hand the whole multibillion-dollar job of managing daily life for 3 million Palestinians back to the Israeli Defense Ministry. He might then reestablish the Palestinian Authority as a government-in-exile somewhere and begin making Israel’s life really miserable.

Abbas’s long-term goal — assuming he’s not just improvising empty gestures to impress the folks back home in Ramallah — seems to be creating a situation in which Israelis will wake up one morning to find that their troops are no longer holding a piece of disputed land that’s up for grabs, but actually occupying a neighboring state. At that point, the argument would no longer be over what sort of entity will take shape in the West Bank, but when Israel will bring its troops home from the neighbors’ territory. If and when things reach that point, Israel will be in a much weaker position when it comes to resolving its most urgent questions, like exactly where the border sits and what will keep freelance Palestinian bombers from slipping over onto the Israeli side.

In the end, though, nothing will come of Abbas’s hopes of establishing an independent Palestinian state unless an Israeli government agrees to withdraw its troops and let it happen. That would require that Israeli voters choose a government that’s willing to do that. Abbas’s habit of standing before the world community and calling Israelis horrible names doesn’t do much to move things in that direction.

And as canny as Abbas has been at juggling image and reality, Benjamin Netanyahu manages to match him move for move. He’s declared repeatedly that he accepts the principle of two states for two peoples, yet he’s never actually gotten the principle endorsed either by his own Likud party or any of the coalition governments he’s headed.

On the contrary, while Israeli voters repeatedly elect parliaments in which parties that favor the two-state solution hold solid majorities, Netanyahu has managed repeatedly to construct governments in which the minority of parliament that opposes Palestinian statehood constitutes a majority of the governing coalition. He allows settlements to expand, either openly or with a wink and nod, whittling away the amount of land eventually available to a Palestinian state. Lately he’s even begun appointing ambassadors who loudly reject Palestinian statehood to represent Israel in overseas capitals.

None of that necessarily means Netanyahu is lying when he says he favors it. It does mean that he’s running rings around Abbas when it comes to significant diplomatic maneuvering.

You might think Abbas would have learned by now that insults and slander don’t do much to convince a skeptical foe that you’re serious about getting along. But understanding how Israeli opinion works doesn’t seem to be high on his to-do list. He’s more concerned with maintaining the Palestinian claim to the title of world’s greatest victim.

The problem that he doesn’t seem to recognize is that Israelis believe they have a better claim to the title than the Palestinians do. At the very least they come by their sense of vulnerability quite honestly, given the arc of Jewish history over the last century. And decades of suicide bombings and mass murder by Palestinian terrorists — the “freedom fighters” Abbas wants released from Israeli prisons — have done nothing to lessen that sense of vulnerability. If Abbas really wants to achieve peaceful coexistence with Israel, he’d do well to try learning something about Israelis.