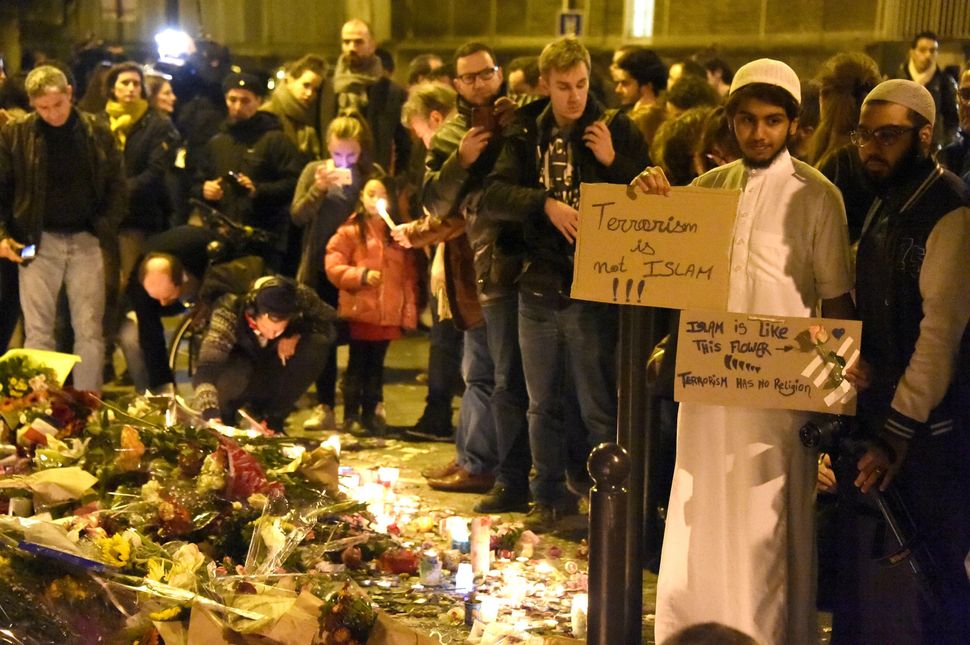 When the editor of this paper asked me whether I wanted to share my thoughts about the tremendous tragedy in Paris, I responded by saying, “What is there to say except, Oy lanu, woe is unto us.” In the hours since then I have decided to modestly add my thoughts. I say modestly because so many people seem to know exactly what must be done to halt such attacks in the future. Many of the suggestions are simply impossible — close the borders to all immigrants from a certain area of the world — or vindictive and counterproductive, such as the call to close the mosques and limit Muslims’ rights.

Even now, less than 48 hours since the assault, there are certain things that are obvious. As I wrote in these pages after the February Copenhagen attacks on a conference about the Muhammad cartoons and on the synagogue where a bat mitzvah was underway: The most important lesson is that unless you name something you cannot address it or resolve it.

This is Islamic terrorism or, as some call it, jihadism. It does not represent all or even the majority of Muslims. In fact, although no one knows for sure, it probably represents a very tiny proportion of Muslims. Yet there is no question that it grows out of a particular perspective or interpretation of Islam. Those who attribute these attacks to “extremism” or just plain “terrorism,” rejecting any connection to Islam, will never be able to address or resolve the problem.

Its roots are in the interpretation of Islam adopted by ISIS and other terrorists. But in directly describing this deadly phenomenon, we have to be careful of “explaining” it as the result of the social and economic situation experienced by some Muslims in various countries, including France. There are, of course, Muslims, particularly in countries such as France, who suffer from social and economic discrimination. Some have pointed to that as a “source” of this extremism. That borders on a justification and a blaming of the victim. While to be unemployed is difficult and to be discriminated against is completely unjustified, these are never reasons for terrorism. Linking the two is misguided and wrong and offers the perpetrators a rationalization for their action.

However, if we label all Muslims and their religion as extremist and murderous and ostracize them, we will drive an unknown number into ISIS’s arms. ISIS’s best recruiting tool is convincing Muslims in other countries that they are victims.

If this threat is going to be addressed, the most important source of help will come from within the Muslim community, from those who totally reject and are repulsed by the interpretation of Islam adopted by ISIS, Al Qaeda and the like.

These people will be more likely to speak out if they feel supported, not just from within their community, but from outside of it as well. ISIS’s modus operandi had been to find local recruits. However angry non-Muslims may feel about these attacks, they must not fall into ISIS’s trap by lashing out at all the Muslims in their community and making them feel marginalized.

It is hard to resist engaging in vast generalizations, especially when our hearts are filled with grief and anger, but we must. We Jews should know how unjust these generalizations are. After all, we worry that if a small group of Jews does wrong we will all be branded.

During this anguished time, I’m reminded of a viral video from the University of Missouri recorded during a rally after the university president resigned under pressure. A photojournalism student who was harassed by other protesting students bravely stood his ground. The photographer reminded the students that the Constitution that gave them the right to march gave him the right to record their march. At one point, a student tried to restrain a fellow protestor who was getting aggressive and seemed about to physically harass the photographer. He kept pulling at the protester’s sleeve and repeating: “Don’t change the story. Don’t change the story.”

This student intuited, correctly, that the story was on the verge of becoming about the treatment of the photographer and not about their grievances. And this is what is occupying the national conversation right now.

We cannot afford to “change the story” from Islamic terrorism and extremism by unjustly lashing out collectively at Muslims, most of whom do not share these extremist views. We must not engage in vast generalizations about Muslims, not just for moral reasons — which should be sufficient in and of themselves — but for strategic reasons as well.

Let us call this terror what it is, Islamic violent extremism. But in doing so, let us engage the vast majority of Muslims who are the key to arresting this deadly scourge.