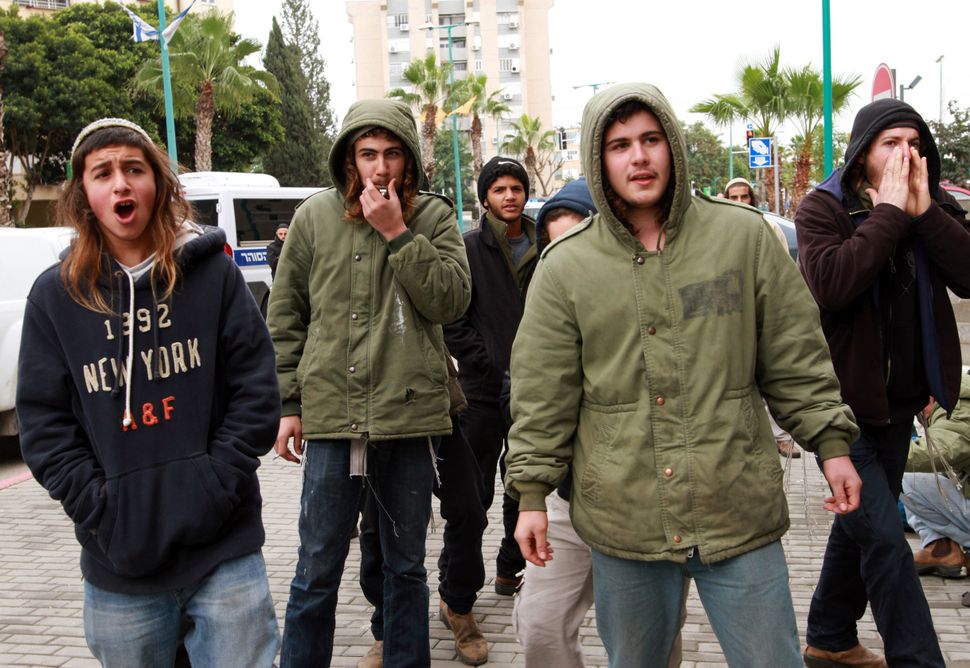 In a uniquely Israeli bit of irony, the VIP protection unit of Israel’s Shin Bet security service has beefed up protection — for the director of the Shin Bet, Yoram Cohen.

The reason, according to Israel’s Channel 10 television news, is growing agitation against the Shin Bet and its director by pro-settler radicals. Intense anger has erupted among activists on the far right, leading to at least one major demonstration and several minor ones, over rumored mistreatment of Jewish terror suspects during Shin Bet interrogation.

The protests follow the arrests of a half-dozen suspected Jewish extremists in early December as suspects in the July 31 firebombing of a home in the West Bank Palestinian village of Duma. An 18-month-old child was killed in the attack, and the child’s mother and father later died of their wounds. The suspects were reportedly held under rules usually reserved for Palestinian terrorists, prevented from seeing lawyers for 18 days, deprived of sleep and subjected to harsh Shin Bet interrogation.

But that’s not the ironic part. The fact is, it was only because of pressure from the settler movement that Cohen was chosen to head the Shin Bet in the first place. An Orthodox Jew identified with the political right, Cohen — the colorless chief of the Shin Bet headquarters staff — had been slated to retire in May 2011 as the baton was passed to the agency’s then-deputy director, Yitzhak Ilan. But Ilan was vetoed at the last minute by Prime Minister Benjamin Netanyahu and Cohen was appointed instead. The reason reportedly was Ilan’s earlier service heading the agency’s so-called Jewish division, the unit in charge of tracking Jewish terrorists and extremists. That made him anathema to the settler movement.

Whatever its circumstances, Cohen’s promotion made history at the time. He was the first Orthodox Jew to head any major Israeli security agency. But that was then. Today, just four years later, Orthodox Jews head not only the Shin Bet but also Israel’s national police and the powerful intelligence directorate of Israel’s military. Another is set to take over the Mossad foreign intelligence agency in January.

Yet another has been named attorney general, an independent office that doubles as both head of the state prosecution and government legal adviser.

The religious transformation of the security establishment had long been predicted, but its arrival, when it came, was surprisingly sudden. Religious Zionists, the Israeli version of Modern Orthodoxy, comprise about 20% of Israel’s overall population. They traditionally served shortened military duty combined with religious study. About two decades ago, however, nationalist rabbis began urging students to volunteer for combat units and officers’ training. Observers inside and outside the defense community predicted a gradual rise of such religious Zionist recruits through the military ranks.

In the end the change came almost overnight, not through gradual promotion of religious-nationalist soldiers but via top-down appointments in the secret services. It wasn’t demography that did it, but Netanyahu.

Though not religiously observant himself, Netanyahu apparently was intent on putting Israel’s security services — at least those he controlled — in reliably conservative hands. This followed repeated clashes between him and the security chiefs over Iran, peace negotiations and relations with West Bank Palestinian civilians. Having religious nationalists in the sensitive posts was expected to yield policies favored by government hardliners and their settler allies.

The results haven’t always met expectations. Since the current wave of Palestinian violence erupted in early October, both Cohen’s Shin Bet and the new military intelligence chief, Major General Herzl Halevi, have delivered reports that angered the hardliners. The professionals say the attacks are mostly spontaneous acts by frustrated youth. Netanyahu and his allies blame ideological motivations and incitement by Palestinian leadership.

The arrests of the Duma suspects, however, have opened an entirely new fault line. This one divides settler movement leaders and their hardline political allies from a younger group of settler radicals even further to their right. The radicals, mainly youth in their teens and 20s, reject the authority of the mainstream religious Zionist leadership, including its leading rabbis. Many were raised in settlements but left in recent years to live in impromptu outposts on isolated West Bank hilltops.

According to the Shin Bet, the Duma suspects are members of a network of hilltop youth aiming to overthrow the Israeli government and replace it with a biblically-inspired monarchy. Partly influenced by the teachings of the late Rabbi Meir Kahane, they see attacks on Palestinians as a way to create chaos, turn Israelis against each other, weaken state institutions and isolate Israel from foreign allies whose influence they despise.

The arrests, and subsequent reports of the suspects’ harsh treatment by their Shin Bet interrogators, have prompted an intense debate within the religious Zionist community. Settlement hardliners accuse the Shin Bet of torturing the suspects. The agency, in a rare public statement, flatly denied the accusations. A group of 47 moderate rabbis, led by David Stav of the Tzohar organization and the American-born Shlomo Riskin, issued a public letter (English summary, Hebrew text) December 25 supporting the agency and condemning the radicals. Most centrist and right-wing Zionist rabbis have been silent.

Thus, another irony: The Shin Bet, long an object of criticism from the Israeli left because of its harsh counter-terrorism tactics, now finds the center and moderate left springing to its defense in the face attacks on it from the right.

The debate has also cut through the middle of the settler-backed Jewish Home party, a key partner in Netanyahu’s governing coalition. The head of the party’s far-right Tekuma faction, Agriculture Minister Uri Ariel, called December 22 for the closing of the Shin Bet’s Jewish division. But party leader Naftali Bennett delivered a forceful defense of the agency and its tactics in a much-discussed December 22 speech to a convention of religious Zionist educators.

“Anyone who believes as we do in what the Shin Bet does to Palestinian terror suspects in order to save Jewish lives cannot object when the same things are done to Jewish terror suspects,” he said. “Nobody is being hung by their feet. Nobody is being sexually abused. Everything is closely supervised. Interrogations aren’t pleasant. Why? Because suspects don’t talk. We want information. We want to get to the terrorists before they strike again.”

At the same time, Bennett’s words reminded Israelis that the ultimate goal of religious Zionism is to take the reins of the state and mold Israeli society in its own messianic image. The debate within the movement is over the pace, not the ultimate goal.