The Oscars Are Too White — and That’s a Jewish Problem 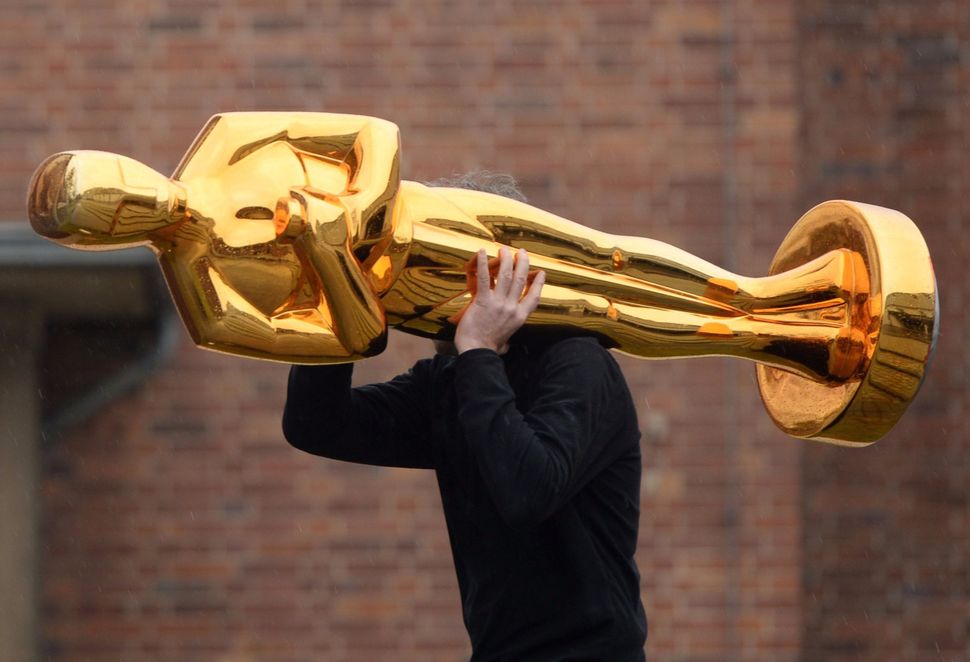 “The Jews control Hollywood.” It’s one of those anti-Semitic tropes that, we all know, contains a certain grain of truth. “Control,” no — not with that ominous, conspiratorial connotation. But “helped create”? “Disproportionately populate?” Sure.

From the founding of California’s motion picture industry (well documented in books like Neal Gabler’s “An Empire of Their Own: How Jews Created Hollywood”) to the present day, Jews have played an outsized role as its producers, agents, directors and writers. It’s not just a myth.

Which is why the at-least-equally disproportionate exclusion of people of color from the Academy Awards — the phenomenon hashtagged as #OscarsSoWhite — is a Jewish problem. But it’s also a Jewish opportunity, because if Jewish leaders took the initiative to address the crisis proactively, the Jewish “elephant in the room” could instead be a powerful force for change.

We can’t know precisely how many Jews vote in the Academy of Motion Picture Arts and Sciences, a lofty name for what is mostly a trade organization. That’s because the names of the academy’s 5,765 voting members are kept secret.

In 2012, however, the Los Angeles Times did what Angelenos do best — they networked — to confirm the identities of more than 5,100 of those voters. What they found, to no one’s surprise, is that the academy is as white as this year’s honorees. In 2012, Oscar voters were 94% white and 77% male. Blacks and Latinos constituted about 2% each.

That is disgraceful, even if the numbers have improved over the past four years.

One reason for the academy’s racial homogeneity is revealed by another statistic: The average Oscar voter is 62 years old. Membership is for life, and with an average age of 62, some of these voters have led long lives indeed, dating back to the time when people of color were excluded from industry leadership and relegated to stereotypical roles in front of the camera.

If the academy were an actual academy in the true sense of the word, it might recognize the present-day effects of historical injustices — part of what we call white privilege — and take affirmative actions to correct them. But the academy isn’t a real academy, it’s a club. Specifically, it’s like a 1950s private social club. Apart from Oscar winners, members must be referred in.

Now, this situation is finally changing. The academy’s president, Cheryl Boone Isaacs, is a woman of color. And, in response to the recent outrage, the governing board took some important steps: abolishing life membership, and doubling female and minority membership by 2020.

These steps are valuable, but the academy is a symptom of a larger, industrywide problem.

Yes, there were outstanding performances by black actors this past year — Idris Elba in “Beasts of No Nation,” Will Smith in “Concussion” — but there were fewer Oscar-worthy performances because fewer Oscar-bait roles were made available. When, last year, Viola Davis became the first woman of color to win an Emmy for best actress in a drama, she said that “the only thing that separates women of color from anyone else is opportunity. You cannot win an Emmy for roles that are simply not there.”

As Variety pointed out, if the motion picture industry reflected the American population, there would have been 150 films directed by women and 95 directed by people of color. The actual numbers are a couple dozen each.

Here’s where Jewish leadership could play a role.

Suppose L.A.’s celebrity rabbis urged Jewish film machers to take the initiative in diversifying the industry as a whole, not just the academy specifically. Suppose those movers and shakers personally committed to more recruitment, more support and more training of women and people of color in the film industry at large.

None of this would require government programs, quotas or race-based hiring. Rather, imagine if the Spielbergs and Geffens of L.A. endowed scholarships for minority students working in film, internship opportunities at their own shops, and proactive efforts to reach out to those from disadvantaged communities.

And imagine if they did so as Jews — generally, in the case of Hollywood, non-practicing and non-religious Jews, but still members of what Justice Felix Frankfurter once called “the most persecuted minority in history.” If a public alliance of American Jewish filmmakers took personal initiative to fix this unjust, embarrassing and ugly situation, they could make a real difference.

Would this not honor American Jews’ long experiences with marginalization and exclusion, the historic support of Jews for the civil rights movement, and the most profound teachings of the Jewish ethical tradition?

It would also honor the Jewish history of Hollywood itself. That history is, in many respects, an honorable one with respect to race and class. Gabler’s book makes a convincing argument that Jews, excluded from the elitist and racist New York film industry, created an alternate universe in California that valued the underdog over the elite, the outsider over the insider. This was the world of “Gone With the Wind” (produced by the Jewish David O. Selznick) — which, for all its racial stereotypes and concentration on white Southerners, focuses on a female hero with far less prejudice than her peers — rather than that of the overtly racist “Birth of a Nation,” in which the Ku Klux Klan are the heroes.

So, to call for a Jewish response to #OscarsSoWhite is not to demean the Jewish role in Hollywood, but to affirm its best aspects while working to remedy its shortcomings.

Like it or not, Jews are implicated in #OscarsSoWhite. Rather than sweep the pernicious “Jews control Hollywood” myth under the rug, we should acknowledge the reality that underlies it (while, of course, condemning its anti-Semitic exaggeration) and use that disproportionate influence to pursue justice, learning from our marginalization to fight the marginalization of others. Now that would be a Hollywood ending.

The Oscars Are Too White — and That’s a Jewish Problem