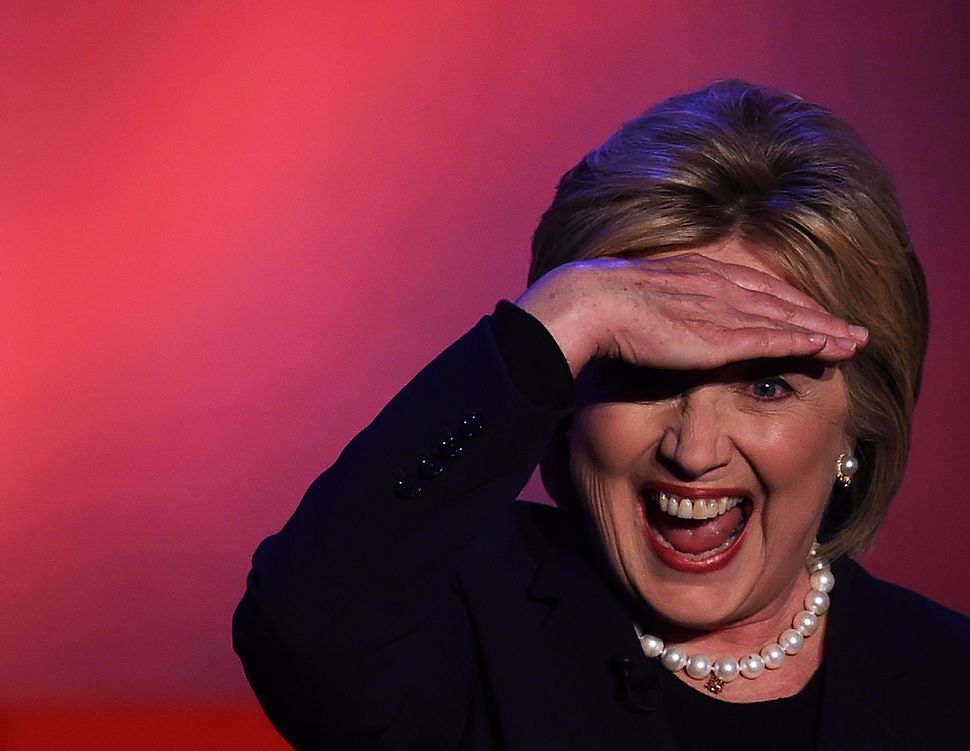 Hillary Clinton was dealt a hard blow when Bernie Sanders won by a landslide in New Hampshire, causing some to speculate that the Clinton team might be looking for ways to hit the Vermont socialist and stymie his momentum.

Nathan Guttman outlined one potential line of attack for the Clinton camp: assailing Sanders for not being an exuberant enough supporter of Israel. “Hillary Clinton has been a very strong friend of Israel and that is something that should not be lost on the American Jewish community,” Paul Hodes, a former New Hampshire Congressman and apparent unofficial Clinton surrogate, said. “Senator Sanders hasn’t showed himself to be the kind of friend of Israel that Secretary Clinton is.”

The Clinton campaign was quick to disavow this report on February 10, distancing itself from the implication that it would question Sanders’s pro-Israel credentials. And in fact, the report’s thesis — an incoming barrage about Sanders — was a bit thin; only Hodes’s remarks were cited, with little other concrete reporting in the way of the Clinton campaign’s plans.

That the campaign says it’s not planning such an attack is undoubtedly a good thing for Clinton: It would have been unlikely to help her much.

It became apparent in New Hampshire that Sanders is in large part bogeyed by his support from young Americans; one needs only Google “Sanders young voters” to find a bevy of articles laying out both empirical data to support the trend as well as a slew of analysis hypothesizing on the reasons behind it.

And that’s where the Clinton attacks would run into trouble: young people aren’t going to buy this Israel gambit. The polling and anecdotal evidence abounds: Younger demographics are less likely to buy into an uncritical take on Israel than older ones. These dynamics hold true for young Jews as well as non-Jews. Anyone who has been to both an AIPAC conference, on the one hand, and a J Street or Haaretz/New Israel Fund confab, on the other, can attest to this.

Groups like J Street and New Israel Fund, of course, aren’t implacably opposed to Israel — both are on solid footing as liberal Zionist organizations — but the sort of uncritical stance taken by the Clinton campaign in this cycle will be anathema to their adherents. These are young people who were more likely to look critically upon Israel’s last war against Gaza, or take a more positive view than their community as a whole on the Iran nuclear deal.

That said, there’s a segment of young activists who are opposed to Israel and who, my experiences interacting with them would suggest, are more likely to support a social democratic candidate like Bernie Sanders. Think, for a moment, about the youthful energy found around the movement to boycott, divest from and sanction Israel, which has reached such a level on college campuses that the traditional pro-Israel institutions in American life have sought to raise a multi-million dollar fight against the left-wing activists.

Moreover, the hypothetical — now disavowed — attack from the Clinton camp would have missed a basic tenet of the American Jewish community’s voting preferences: If she wants to bring the energetic and, if many election analyses are to be believed, crucial support of young people over to her cause, Clinton would do better to tack toward more robust stances on social issues.

This, again, applies especially strongly to young Jews, but also to the Jewish community as a whole.

“Whoever wants to appeal to Jewish voters has to go through social values,” Robert Jones, of the Public Religion Research Institute, told the Forward in 2012 on the occasion of a new poll released as Barack Obama’s reelection campaign was heating up. “Our poll shows that you cannot appeal to these voters through the single issue of Israel.” Indeed, Jewish voters made a low priority of Israel.

Clinton’s unofficial surrogate Paul Hodes seemed to miss this dynamic entirely. “Bernie is a secular Jew and I don’t think his religion influenced his stance on Israel,” Hodes said. “We know Hillary and we know she has an unshakeable bond with Israel, so this shouldn’t pose a great dilemma for Jewish voters.” Not only does Hodes ignore the aforementioned preferences of Jewish voters, but presumes the exact opposite dynamic is at work: that there should be no “great dilemma” for Jews voting in the primaries because of Clinton’s pro-Israel politics. The wishful thinking is only made worse by the moderate offense of assuming Jews only vote on Israel.

Mind you, if the Clinton camp were to go ahead with an attack on Sanders’s pro-Israel credentials, that might work as an appeal to the Jewish community’s donor class rather than its young liberals. Notably, among the billionaires who flirted with the notion of funding the effort against campus BDS was Haim Saban, the Clintons’ largest donor — and, from the perspective of progressive Middle East policy activism, one of their most problematic ones.

Saban, as it happens, is in his focus on Israel unlike the vast majority of Jewish voters. “I’m a one-issue guy,” he has said, according to the New Yorker, “and my issue is Israel.”

If the Clinton campaign wanted to court Saban, for whom there indeed must be no great dilemma, then that would be all fine and well. But if what they’re really looking for is to bring enthusiastic young voters to their cause — and away from Bernie Sanders’s — any plan to attack on Israel would backfire.

“The first Jew in history just won a primary, as a proud socialist calling for political revolution, backed 85-15 by millennials,” wrote Simone Zimmerman, a young liberal activist and member of the group IfNotNow, on Facebook, “and Hil thinks she can win us back with hawkish Israel policies? Wake the f—k up.”

Ali Gharib is an independent journalist based in Brooklyn. Follow him at @ali_gharib