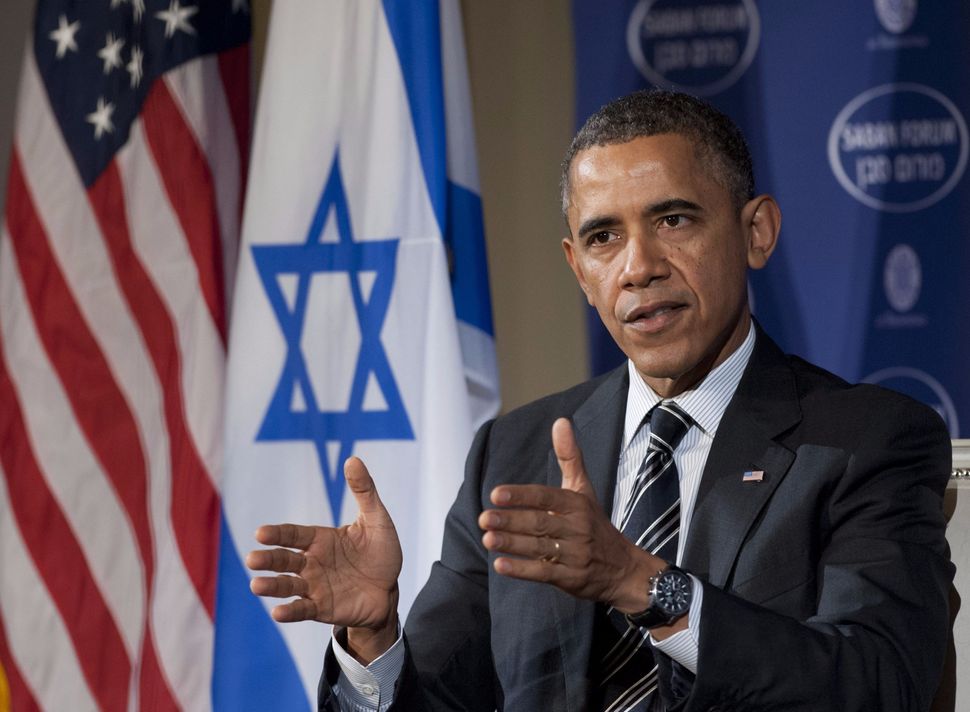 Last week, President Obama made the strongest statement to date that settlement boycotts are a legitimate tactic for liberal pro-Israel groups and activists to use. Although he certainly did not phrase it that way, his language suggests that a position considered beyond the pale when Peter Beinart advocated it just a few years ago — “partial BDS” or “Zionist BDS” — is now apparently mainstream enough for him, the president of the United States.

Upon signing a trade bill that included punitive measures for companies that boycott Israel and its settlements, Obama announced that his administration would only enforce the bill’s protections as they apply to Israel proper, not the settlements.

Fierce controversy has since erupted over the bill itself and the president’s signing statement. Supporters of the bill’s provisions targeting boycotts of Israel and the occupied West Bank frame them as part of a bipartisan effort to halt the momentum of the BDS movement, which they see as part of a global effort to delegitimize Israel. But liberal pro-Israel groups have argued that shielding the settlements from boycott amounts to a stealth move to legislate U.S. support for settlements and strengthen the occupation, now nearing its 50th year.

For the first time, Obama has distinguished between the BDS movement writ large and settlement boycotts. With liberal Jews increasingly convinced that the Israeli government will not act to end the occupation without outside incentive, pressure is building on dovish pro-Israel groups to adopt more radical tactics. Obama’s move will push left-leaning pro-Israel groups to reconsider whether the time is right to refashion the boycott tactic for their own purposes.

As passed by Congress, the bill called for the U.S. government to monitor and not cooperate with any companies that boycott Israel or “Israeli-controlled territories.” In the signing statement appended to the bill, Obama reiterated his opposition to the BDS movement in general. But he rejected the language crafted by the bill’s authors that applied the law to both boycotts of Israel and Jewish settlements in the occupied West Bank. For Obama, that portion of the legislation amounted to formalizing U.S. support for the Israeli settlement enterprise, something no administration has ever done.

The reason hawkish Israel defenders are up in arms is that Obama implicitly stated that settlement boycotts are a legitimate form of protest against the Israeli occupation. In fact, it was the European Union’s decision to label settlement goods that triggered AIPAC and its allies’ efforts to pass legislation at the federal and state levels, providing blanket coverage of Israel and the settlements.

Although AIPAC has refused to comment on Obama’s signing statement, a November 2015 press release argued that the E.U. labeling policy “on certain products made by Israeli companies” will “promote a de-facto boycott of the Jewish state.”

The idea that settlement boycotts must be stopped underlies the angry responses of the bill’s congressional supporters to Obama’s signing statement.

One of the architects of the bill, House Republican Pete Roskam, lashed out at Obama, accusing him of mitigating “the anti-BDS provisions I was proud to author” and of refusing to fight “efforts to delegitimize Israel.”

Roskam’s statement made no direct reference to settlement boycotts and his effort to stop them, as he claimed that the bill’s anti-BDS provisions simply “protect American companies doing business in Israel.”

On Friday, a group of prominent hawkish pro-Israel Democratic senators also jumped into the fray. This group, including powerful senators Chuck Schumer and Ben Cardin, backed the bill as passed — and rejected Obama’s signing statement.

In a joint statement, the lawmakers repeated the basic talking points of the bill’s supporters, saying that the BDS movement is akin to anti-Semitism, and thus the bill was a welcome step to “discourage our trading partners from taking politically-motivated commercial actions against Israel.” They pushed back against the idea that the law’s undifferentiated approach to Israel and so-called “Israeli territories” endorses the occupation.

Meanwhile, dovish pro-Israel groups praised Obama’s signing statement. While declining to differentiate settlement boycotts from the larger BDS movement, J Street’s vice president of government affairs, Dylan Williams, warned that “many in Congress want to erase the distinction between being pro-Israel and being pro-settlement.”

But in light of Obama’s statement, it seems that J Street will have to grapple with whether it can be credibly anti-occupation if it remains opposed to or ambivalent about settlement boycotts.

Americans for Peace Now, for instance, has already called for a settlement boycott, declaring, “Wringing one’s hands about settlements and the fate of the two-state solution does not substitute for actually doing something to try to stop Israel careening down this self-destructive path.”

Currently, J Street’s policy is that it will never support boycotts, but will not oppose those that explicitly support Israel’s right to exist and the two-state solution.

With pressure from J Street’s left coming from its campus affiliate, J Street U, it’s probably only a matter of time before J Street changes its policy. J Street U activists have launched a campaign to make Jewish communal institutions disclose their financial support for settlements, and ultimately force them to divest.

Even if J Street refuses to move, it’s likely that its more progressive students will increasingly favor settlement boycotts. Obama’s statement, in fact, can be read more as a green light for many of the BDS resolutions on American college campuses. In recent years, many of the successful BDS resolutions at universities actually did not call for a boycott of, or divestment from, Israel altogether. Instead, in a strategic decision, student-led Palestinian solidarity groups, often working in coalition with identity-based social justice groups, opted to narrowly focus resolutions on Israeli human rights abuses or companies operating in the occupied territories. A successful 2014 divestment push at UCLA is one of many such examples.

Obama’s signing statement creates a climate in which left-leaning pro-Israel students can increasingly support boycott and divestment campaigns that exclusively target the occupation. Last February, Stanford University’s J Street U chapter famously refused to join either side in the debate leading up to the successful passage of a divestment resolution aimed at companies operating in the West Bank and Gaza Strip. Notably, that resolution explicitly distanced itself from the global BDS movement.

As campus unrest over the occupation continues, Obama’s differentiation between the settlements and Israel will be a decisive new talking point for activists seeking to gather support for BDS resolutions that don’t extend beyond settlement boycotts.

Aaron Steinberg-Madow is a graduate of Haverford College, where he studied history.