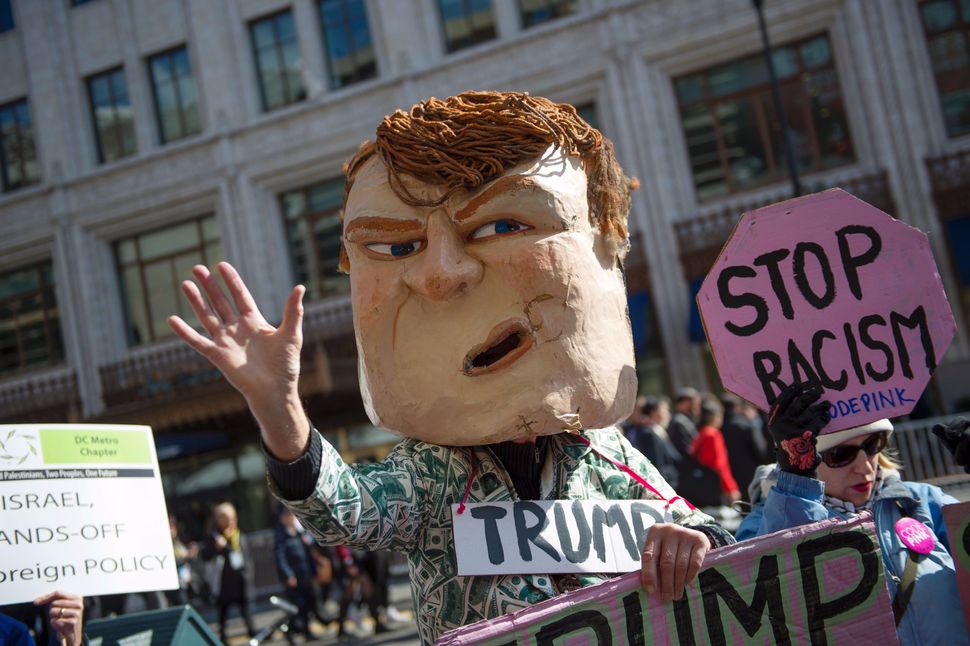 When I heard that Donald Trump would be speaking at the AIPAC conference, I hoped that all Jews would recognize him for the racist demagogue that he is and reject him. Instead he gave his speech, delivered his red meat talking points on Israel, and by and large the crowd applauded him. Kippot with Trump’s name on them sold out at the conference.

How am I, a Mexican-American Jew, supposed to feel about that? And what does it say about American Jews’ relationship to white supremacy?

For as long as I can remember, I’ve heard Ashkenazi American Jews debating whether or not they have become white. They ask themselves: When did we become white? Are we really white if white supremacists still hate us? Can a people targeted by a racist genocide in living memory really be assimilated into whiteness? Given our prosperity and privilege, can we be anything else but white?

As the daughter of a Mexican gentile father and an Ashkenazi Jewish mother, there’s no question for me: I know I’m not white. In the streets people guess freely as to what my race and ethnicity is, and white isn’t one of their guesses. Most of the recognition I get is from fellow Latinos. I’m hardly ever recognized as a Jew, outside of Jewish events or when I’m speaking Yiddish.

With all due respect to my white Jewish friends and colleagues, people of color in the United States don’t need to take a course on critical race theory to understand the nuances of race. Anti-Semitism exists, and I’ve received a fair amount of it from fellow people of color, but its impact and extent doesn’t compare to the systematic racism of American society. White Jews simply don’t face the criminalization that black and brown people in this country do. They are not locked up or deported in record numbers. Nor is their demographic growth or struggle to not be capriciously murdered by police considered a threat by a large and reactionary part of our population.

Most white Jews, in my experience, like to rest on their laurels of liberalism. How could we be racist, they say, when we vote overwhelmingly for Democrats and fought for civil rights back in the day? White Jews prefer to focus on their individual martyrs against racism (like murdered civil rights activists Andrew Goodman and Michael Schwerner) and not so much on their own complicity with systemic racism, whether it’s housing segregation or silence about rising Israeli racism.

The proof of this is that a full 20% of American Jews do not identify as white and few of them have a home in the Jewish community. Almost all Jews of color whom I know have dealt with some combination of erasure, suspicion, tokenization and/or double standards. My father, who has always been respectful and encouraging of my Jewish identity, has received such thoughtless bad treatment from white Jews (like the assumption that he’s a janitor or a criminal) that he refuses to enter a shul anymore.

By now, it’s clear that Trump is not only the preferred candidate for explicit white supremacists (who are almost always anti-Semitic) but also that his candidacy is revitalizing that sector. His campaign staffers have links to the kinds of people who believe that anti-racism is a cover for white genocide and Trump himself has become very popular with his followers by insulting Mexicans as rapists, pledging their mass deportation, and calling on his followers to beat up Black Lives Matter protestors.

I would like to think that even for white Jews, the memory of oppression would be fresh enough to make them wary of a candidate with a slogan like “Make America Great Again.” Whatever mythical glorious past Trump is referring to, you can be sure it wasn’t that great for Jews, not to mention what it was like for everyone who wasn’t white.

Will white Jews go the way of other communities like the Irish and the Italians, who, although they have faced oppression in this country, assimilated so successfully that they reject solidarity with people of color and become as racist as other white people?

I know that many white Jews in my community angrily reject Trump and detest all he stands for. But I wonder if they increasingly form a dwindling remnant of a white Jewish community that on the whole has made its peace with, and found a comfortable privileged place within, an oppressive racial order. And after all my struggles to fully claim my Jewishness, I wonder: How will I and other Jews of color be able to remain Jews if my fears are right?

Lina Morales is a Mexican-American Jew living in Boston.