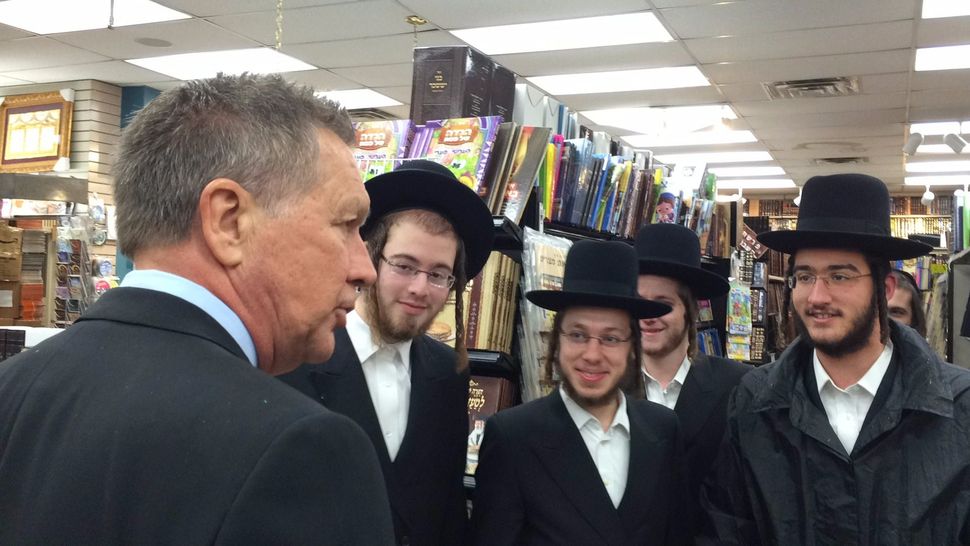 Invoking Jesus , as John Kasich did last week, is obviously incompetent campaigning. Visiting Borough Park before the New York Primary, Kasich explained to several ultra-Orthodox Jews that the paschal lamb prefigures Christ, the “lamb of God.” For a politician, this is roughly equivalent to biting a baby when you were supposed to kiss it. Almost as tone-deaf was Kasich’s dialogue with his Orthodox guide Ezra Friedlander, reported in the Jewish Insider and captured in an excruciating, embarrassing video:

The Ohio Governor and Friedlander also got into a debate over who is the most admired person in the Torah. “I would say, Moses,” Friedlander said. “What about Abraham? What happened to Abraham?” Kasich asked. To which Friedlander replied that the story of the Jewish people accepting the Torah from God started when they left Egypt led by Moses. “What are you talking about? Get outta here,” Kasich dismissed the explanation. “The story of the people are Abraham — when God made a covenant with Abraham, not Moses.” “Yeah, but you know what? In our prayers, we do mention Abraham, Isaac and Jacob —” “Yeah, like they were important,” Kasich interrupted. “But we refer to the laws as the laws of Moses and Israel,” Friedlander tried his luck once again. “So, Moses is up there.”

The Talmudist in me applauds Kasich’s taste for pointless disagreement. But I think it is safe to say that, if you want to pander to a religious niche-group, it would be better to refrain from lecturing them on their own scripture and invoking the messiah they reject.

But this experiment in interfaith dialogue reveals something deeper than Kasich’s political ineptitude. In fact, the argument between Moses and Abraham goes back quite far in Jewish-Christian relations. Friedlander and Kasich are rehashing the split between Mosaic law and Abrahamic covenant, Israelite ethnos and belief-based universal church. That is, between Judaism and Christianity.

The typology dates back to the New Testament, specifically Paul’s letter to the Romans. Paul is trying to prove that “apart from the law the righteousness of God has been made known, to which the Law and the Prophets testify. This righteousness is given through faith in Jesus Christ to all who believe. There is no difference between Jew and Gentile, for all have sinned and fall short of the glory of God” (3:21-3).

To this end, Paul cites the example of Abraham. Abraham is beloved by God for his “faith,” rather than for his “works.” That’s because, obviously, Abraham lived generations before the law was given at Sinai. In Genesis 18, he even serves his guests milk and meat. Abraham is also a symbol of universality: In Genesis 17:4, God calls him the “father of many nations.” Like the Gentiles Paul is trying to convert, Abraham comes from outside, from idolatrous parents. You can tell that the pre-Israelite, pre-law patriarchal period made the rabbis nervous because they produced a series of implausible, strained commentaries insisting that Abraham, Isaac and Jacob “kept the entire Torah.”

Do I think that Kasich and Friendlander knew that they were recapitulating a very old Christian-Jewish debate? No, definitely not. But they were doing this nonetheless, and unsurprisingly. Even the shared Hebrew Bible has vastly different meanings to Jews and to Christians, and the theological context in which you learn it shapes even a question as basic as who the main character is.

As Jon Levenson writes, “Historically, Abraham has functioned much more as a point of differentiation among the three religious communities” — Christianity, Judaism and Islam— “than as a node of commonality.” Judaism and Christianity are two religions divided by a common scripture.

Kasich’s miniature disputation is worth lingering over for one more reason. Since the 1990’s, conservatives have increasingly spoken about “Judeo-Christian values.” The fuzzy term serves many functions: to persuade Orthodox Jews to vote Republican, to lend a veneer of universality and diversity to a narrow, repressive agenda around gender and sexuality, and implicitly to define Muslims as religious Others who threaten a hazily defined religious West.

But Kasich usefully reminds us that the “Judeo-Christian tradition” is a tradition of Christians constructing a Judaism congenial to their purposes — and then condescending to explain our own religion to us.

With any luck, though, the right-wing bid to woo Jews and appropriate Judaism will be no more successful than Kasich’s presidential candidacy.