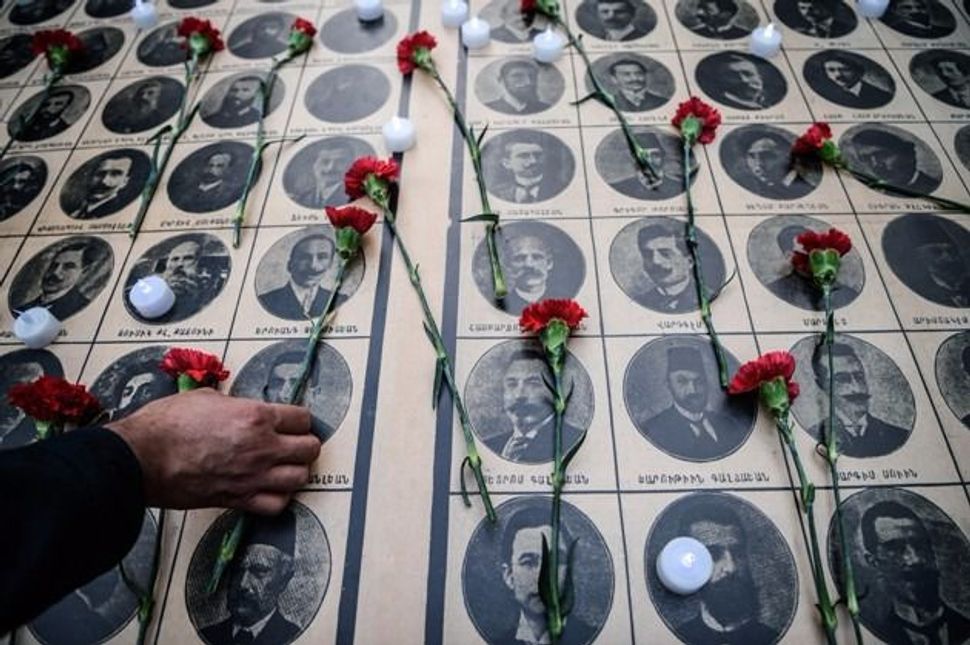 Imagine that you’re walking in Manhattan a few days before Holocaust Memorial Day and see five airplanes skywriting in massive letters that the Holocaust was a hoax.

How would you feel?

Imagine that you later find out that a full-page advertisement had run the same day in the Washington Post explaining that although some Jews were killed during World War II, the Holocaust never occurred. Imagine if that advertisement directed readers to a website that explained that these same Jews were responsible for their own deaths.

How would the American Jewish community react?

And imagine that a massive billboard with the same advertisement was erected in Times Square shortly before tens of thousands of Jews were set to gather there to commemorate Kristallnacht.

To whom would you turn? Would you still feel safe living in New York?

For New York’s Armenian community, this is unfortunately not just a hypothetical situation. On April 20, a few days before the 101st anniversary of the beginning of the Armenian Genocide, five airplanes really did skywrite over the Hudson River that the Armenian Genocide is a “Geno-lie.” A full-page advertisement was really run in the Washington Post explaining that although some Armenians were killed during WWI, there was never a genocide against them, and the same advertisement directed readers to a website explaining that the Armenians were responsible for their own deaths. When tens of thousands of Armenian Americans gathered in Times Square to commemorate the 101st anniversary of the April 24, 1915 mass arrest and subsequent execution of 250 Armenian intellectuals, regarded as the first attack of the genocide, attendees really were confronted by a large billboard denying the slaughter.

Despite the attempts of groups trying to pretend otherwise, the historical veracity of the Armenian Genocide is simply not up for debate. Between 1915 and 1923, the Turkish government systematically and purposefully murdered about 1.5 million Armenians in a plethora of horrific ways. As attested to by hundreds of articles in The New York Times alone, the Turkish army raided thousands of villages, immediately slaughtering the young men and forcing the surviving Armenian women, children and elderly onto death marches in the Syrian desert. During these marches Turkish soldiers raped young Armenian women and girls by the thousands and shot random people dead. According to various contemporary diplomatic sources, the massive Euphrates River was left overflowing with tens of thousands of corpses.

In a disturbing foreshadowing of the Jewish Holocaust, thousands of Armenians were squeezed into crowded train cars that led to their deaths. Many of those who reached the Syrian desert, either by train or after having survived death marches, were imprisoned in concentration camps where they quickly died of dehydration. In other places, children were murdered with overdoses of morphine. In a few cases the Turks executed large groups of Armenian children by locking them in schools and releasing a toxic gas.

Contemporary press reports explain in remarkable detail that the massacres were not the actions of random misbehaving soldiers but the result of a clear and intentional plan by the Turkish government. As one article that ran in The New York Times on October 7, 1915 titled “800,000 Armenians Counted Destroyed” explained, Viscount Bryce, a British MP who had previously served as the U.K.’s ambassador to America, testified before Parliament that “The death of these people resulted from the deliberate and premeditated policy of the gang now in possession of the Turkish government. Orders for the massacres came in every case direct from Constantinople.”

The same article reported that nearly the entire Armenian population in large swaths of the Ottoman Empire had already been killed. Other contemporaneous articles precisely described the events as a “policy of extermination against a helpless people” and a “campaign of race extermination.” It is no surprise, therefore, that the Polish-Jewish legal scholar Raphael Lemkin had the Armenian catastrophe in mind, along with the extermination of his own family in the Holocaust, when he coined the term “genocide” in 1943.

The Armenian-American community strongly protested against the campaign by Fact Check Armenia to deny the historical veracity of the murders of their families. Unfortunately, the American Jewish community barely responded to it. One reason why is that today’s Turkish government completely denies that the founders of its country committed a crime against humanity. Because Turkey plays a key role in Middle Eastern politics, many politicians and organizations, including American Jewish ones, are afraid to offend it.

President Barack Obama is a good example. Despite the fact that 44 American states recognize the Armenian Genocide, the federal government carefully avoids using the G-word out of fear that Turkey may punish the U.S. by ceasing to cooperate with the U.S. military.

In 2007, when the U.S. Congress failed to pass a bill recognizing the Armenian Genocide, then-senator Obama criticized his colleagues for voting against the proposal. In January 2008, Obama strongly criticized the State Department’s decision to relieve American Ambassador to Armenia John Marshall Evans of his duties, allegedly for his having described Turkey’s actions during World War I as genocide. Obama promised at that time that if he were elected president he would always openly state that the Turkish government had committed genocide against its Armenian citizens. Despite his promises, however, President Obama has fastidiously avoided using the G-word in official statements.

Similarly, Abe Foxman, the former national director of the Anti-Defamation League, unleashed a firestorm of controversy in 2007 when he urged Congress not to recognize the Armenian Genocide. Andrew Tarsy, the director of the ADL’s New England branch, was fired after he told Foxman over the phone that he felt that the organization’s position was “morally indefensible.” (He was rehired shortly thereafter.) The ADL then released a cowardly press release explaining that the events in Turkey during WWI were “tantamount to genocide” but that the Congressional effort to officially recognize the Armenian Genocide was a “counterproductive diversion” that would potentially endanger Turkish Jewry and Israel’s relationship to Turkey.

Seven years later, Foxman and the ADL formally recognized the Armenian Genocide. Around the same time, the American Jewish Committee also changed its position. They, together with a half dozen prominent Jewish organizations — including the Union for Reform Judaism, the Zionist Organization of America and most recently, in 2015, the Jewish Council for Public Affairs — now recognize Turkey’s persecution of the Armenians as genocide. And just last week, the ADL’s current national director and CEO Jonathan Greenblatt released a statement unequivocally recognizing the WWI events as genocide and saying that the ADL will support American recognition of the genocide. This is far from sufficient, however; the vast majority of American Jewish organizations still do not have a firm policy on the issue.

The latest brazen attempts to deny history make vividly clear why the Jewish community must take a united stand in recognizing the Armenian Genocide and encouraging the American and Israeli governments to do so. We Jews, more than perhaps any other people in the world, know what it means to suffer genocide and what it feels like when people have the gall to deny that it ever occurred. Besides the fact that it is our moral imperative to do so, there is also a lot we can learn from the Armenians if we express our solidarity with them and work together to fight the denial of their genocide. Since they are a people that experienced genocide a generation before the Jews, we can learn a great deal from them about how to properly remember and commemorate such a tragedy when there are hardly any remaining survivors. It would also, of course, be of great use to have another closely allied people in the fight against Holocaust denial.

Most important, however, is the fact that remaining silent when governments deny the veracity of a genocide encourages others who would seek to commit similar atrocities. As a sign in the United States Holocaust Memorial Museum notes, Adolf Hitler incited his generals just before the Nazi invasion of Poland by asking, “Who, after all, speaks today of the annihilation of the Armenians?”

This piece was published in the Yiddish Forward on May 8, 2016. It has been translated into English by the author.