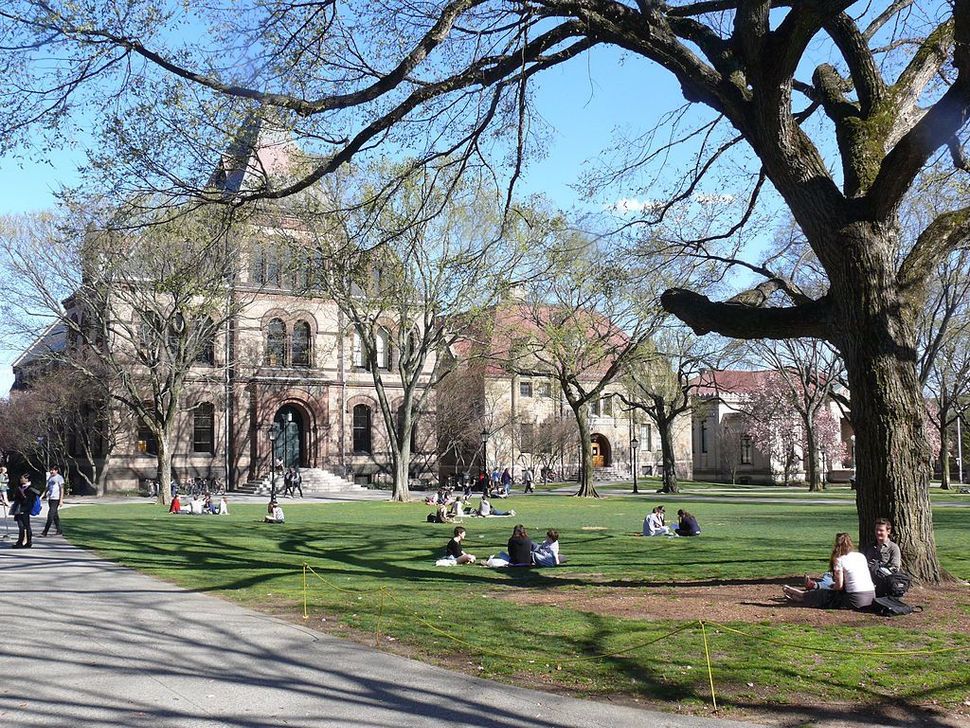 On May 11, more than 70 students crowded into the Hillel meeting room at Brown University/Rhode Island School of Design for a screening of three short films produced by the Israeli NGO Zochrot, and for a discussion about the Nakba (“catastrophe” in Arabic, referring to the 1948 Palestinian expulsion), the politicization of memory, and the obstacles to constructing responsible narratives. We held the event in Hillel, unauthorized — without knowledge of the Hillel staff — after our Hillel withdrew its support.

There was, in the discussion following the screenings, a moment of disagreement. The third film screened, “The Shack,” follows a Palestinian couple whose previous home was evacuated in 1948 as they struggle to keep their current home, a shack on the side of a highway, from being destroyed by the Israeli government. One student called the film an example of Palestinian propaganda. Another said that the Irgun, a pre-state Jewish militia group, committed ethnic cleansing in 1948. The room collectively shifted its tailbone.

Moments like these illustrate the challenges of learning and telling history. In “Mirror Image,” the second film screened at the event, interviewer Danielle Schwartz deals with the difficulties of retelling history when she seeks to clarify how her grandparents came to inherit a mirror said to be seized from a demolished Arab village. What begins as Schwartz’s brief account of the mirror quickly turns into a minefield of contested facts and discrepancies of language: sentences are dissected and debated; words are countered and qualified; was the mirror “plundered” or merely “taken”? According to Schwartz’s grandparents, “taken” is “softer.” It leaves open the possibility of a history in which Schwartz’s great-grandfather actually paid for the mirror. A “taken” mirror absolves the grandparents’ accountability by reinforcing their position as passive players in a history they cannot control. At the end of the film, Schwartz reads aloud the narrative history that she and her grandparents had written together. “We’re good?” Schwartz asks. “So be it,” her grandfather shrugs. Their consensus is not an endpoint but a compromise; it reopens old wounds of the past, asking of them new questions.

To say that the 70+ students from a range of political backgrounds came to watch and discuss these films in order to write a definitive history of Israel’s 1948 war is false. It took 45 minutes of discussion for someone to ask: “What happened during the Nakba?” A single answer to this would be impossible, and for many of the students in the room, that was not what we were trying to achieve.

Following the screening, Hillel International stated that it supported Brown/RISD Hillel’s decision to cancel the event, as the program was “inconsistent with Hillel’s mission and values.” Yet, Hillel’s values make it consistently unclear which forms of Judaism it supports, and what conversations can and cannot be held in the Center for Jewish Life.

Hillel’s mission statement, dedicated to “Enriching the lives of Jewish students so that they may enrich the Jewish people and the world,” promises a political plurality to all Jewish students — including those who challenge dominant Israeli narratives. According to its guidelines for campus Israel activities, “Hillel welcomes a diversity of student perspectives on Israel and strives to create an inclusive, pluralistic community where students can discuss matters of interest and/or concern about Israel and the Jewish people in a civil manner.” But this inclusivity dissolves at Hillel’s front doors.

Walk into a campus Hillel, and you’ll find Birthright posters for free travel within Israel — a right many of our peers from Palestine do not enjoy — and walls adorned with Israeli flags. Students who get involved in discussions about Israel later discover Hillel International’s Standards of Partnership, which bar perspectives deemed too critical of Israel and Israeli policy. Hillel is a politically totalizing space in which one’s acceptance within the Jewish community depends on one’s unconditional support for dominant Israeli narratives. Jews like myself, and like the 70 or so students who attended the screening, and like the thousands of Jews taking part in these conversations across the country, are excluded from a Jewish space that claims to include us.

On Passover we recite the “Ma Nishtana” to ask ourselves what has changed. To ask why we recline on Passover and not all other nights is a question that has remained unchanged for millennia. But the stasis of tradition can illuminate our present. As contexts change, so do the meanings of our answers. Answers to questions about Jewish peoplehood, liberation and values vary depending on where we are, when we are and who’s asking. To ask what has changed is a complete exercise in Jewish tradition; it is the opportunity to overwrite and question the conditions of our past — conditions that may no longer apply to our present.

I urge those who silence our conversations to ask what has changed, and to listen to the Jews who tell you: These questions must be raised in Hillel, the Center for Jewish Life on campus. To do so reflects a pluralism crucial to the integrity of our Judaism. Questioning ourselves is deeply Jewish.

Will Tavlin is a student at Brown University and a writer for the College Hill Independent.