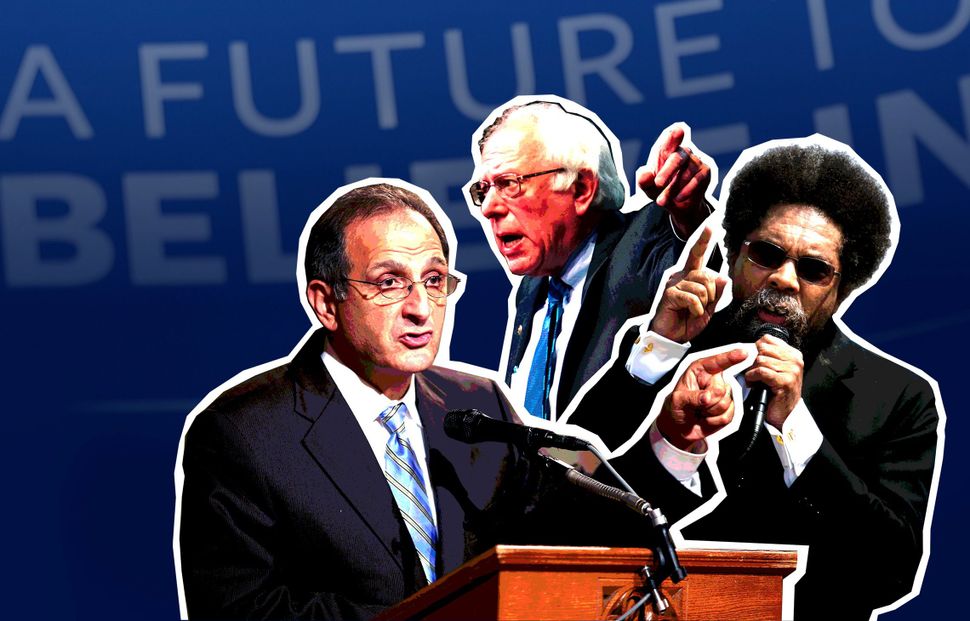 To this unpredictable, irony-filled presidential election campaign, add this: The first Jewish candidate to win state primaries and amass millions of votes is also the one trying to steer the Democratic Party platform away from its full-throated support of Israel.

By appointing outspoken critics of the Israeli government as his representatives on the platform committee, Bernie Sanders is treading a risky political path. He can claim to shore up his base by including ardently pro-Palestinian voices and further boast that he is making the platform committee more reflective of the shifting mood of a slice of the Democratic electorate.

But to what end? Prompting a convention fight over Israel will only give succor to Republicans eager to compensate for their own presumed candidate’s ignorance and weakness on Israel and the Palestinians.

Worst of all, we’ve heard no long-term, alternative strategy for securing a two-state solution to the Israeli-Palestinian conflict from the Sanders campaign. That’s not just bad for Israelis and Palestinians — it’s bad for Sanders himself.

Here’s what we do know: Two of Sanders’s five representatives on the 15-member drafting committee are among the left’s most vocal Israel critics. James Zogby, founder and president of the Arab American Institute, has repeatedly criticized Israeli Prime Minister Benjamin Netanyahu, as he did again in his Huffington Post column published May 21, writing that “his behavior has been shameful, but so too is the extent to which Israelis, Americans and others continue to enable his malevolent rule.”

But while Zogby’s inclusion signals Sanders’s desire to shift the conversation, Zogby is also a team player who has endorsed a two-state solution. He co-chairs the Democratic National Convention’s resolutions committee. Presumably, he knows how to appropriately influence the system rather than blow it up.

Cornel West, another Sanders pick, is more of a wild card. The firebrand academic and activist has criticized Sanders for not being aggressive enough in supporting Palestinians. As West told Salon last summer, “We have a vicious Israeli occupation that needs to be highlighted, because occupations are wrong. I don’t hear my dear brother Bernie hitting that, and I’m not gonna sell my precious Palestinian brothers and sisters down the river only because of U.S. politics.”

Now, it is true that the latest polling data from the Pew Research Center, released May 23, reveals a decided shift in sympathy among liberal Democrats. According to Pew, the share of liberal Democrats who side more with Palestinians than with Israel has nearly doubled since 2014 — to 40% from 21% — and is higher than at any point dating back to 2001. Only 30% of liberals say they side more with Israelis.

But that worrying statistic shouldn’t blur the larger picture: Most Democrats in this poll have a far more sympathetic view of Israel than of Palestinians. Among moderate and conservative Democrats, that sympathy factor has increased to 53% today from 37% in 2001, while the share of those who side more with the Palestinians has remained flat at 19%.

Sanders’s desire to impose a more “even-handed” approach to this conflict is not the sentiment of the majority of the party he purports to want to lead.

Sanders and his supporters have every right to question the status quo on Israel or on any other core issue, and these quadrennial political conventions are the place to do it. The question is not whether, but how. Do the Democrats really need a repeat of the noisy floor fight in 2012 over attempts to amend the platform to restore language that declared Jerusalem the capital of Israel? That episode only gave talking points to Republicans in their perennial quest to peel off Jews from their stubborn devotion to the Democratic Party.

What Democrats do need — what America needs — is a serious, knowledgeable and respectful conversation about U.S. policy toward the increasingly deadlocked Middle East. Netanyahu’s behavior should never be off-limits, especially with his latest, dispiriting moves to bring another right-wing party into his coalition, and with his appointment of Avigdor Lieberman to the sensitive post of defense minister, which has brought furious condemnation from his own Likud party.

But let us not forget the many ways that Mahmoud Abbas, who seems to be Palestinian Authority leader for life, has also quashed hopes for a reasonable settlement of the conflict.

Remember, too, that what Sanders seeks has been tried before. In the opening chapter of his administration, President Obama sought to distance himself from the Israeli government’s more intransigent policies, particularly on West Bank settlement growth, and to repair relations with the Muslim world that had deteriorated so badly under his predecessor.

It didn’t work as planned. Netanyahu deserves some of the blame. But as Martin Indyk, U.S. ambassador to Israel during the Clinton years and special envoy in 2013 and 2014, argued in an interview earlier this year: “The Arabs don’t want him [Obama] to turn against Israel; they wanted him to deliver Israel. And if he is going to deliver Israel, he’s got to have a close and strong relationship of trust with the Israeli people, if not with the prime minister. It took him a long time to appreciate that.”

If Sanders wants to be taken seriously as a movement leader, if not as the actual nominee, then he must contribute more than harsh rhetoric on Israel and sympathetic words for the Palestinians. He needs to show how he would fulfill the aspirations of one people while securing the future for the nation that still is held close by American voters — including Democrats.

In other words, he needs a real plan. Without that, he won’t truly help Palestinians or Israelis — and he won’t help his own image, either.