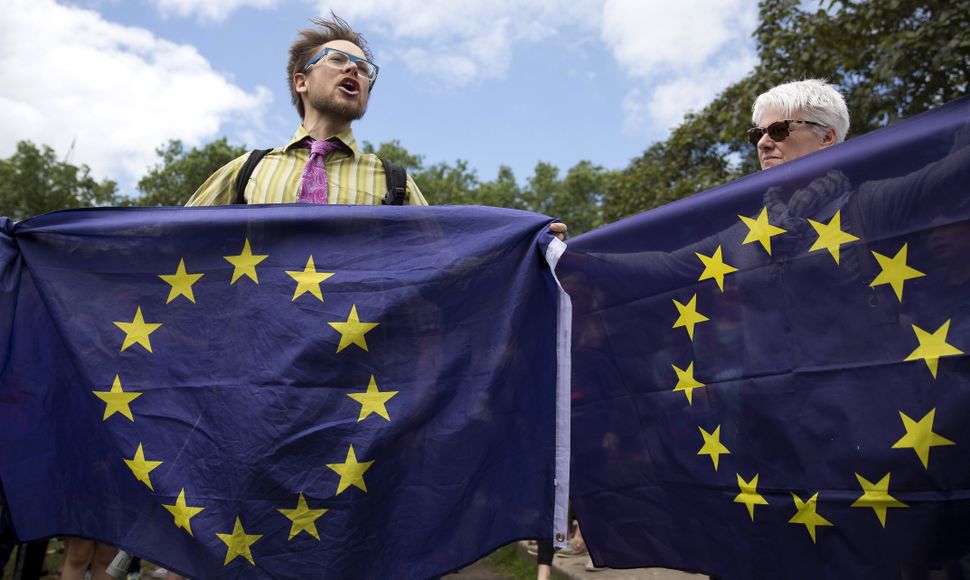 It’s all over and the results are clear. British voters chose to leave the European Union. Even before the deal is finalized, we can see the winners and losers. Xenophobic UKIP and the right flank of the Tories won, and the losers are outgoing Prime Minister David Cameron, Labour Party leader Jeremy Corbyn, the British pound, E.U. citizens living in the U.K., the British working class and, of course, immigrants fearing an emboldened nationalist movement.

On the continent, this sets the stage for the battle of the future of Europe and the possible unraveling of transnational governance. Once marginal figures, leaders of Italy’s Northern League, Germany’s Alternative for Germany and France’s National Front convened right before the Brexit vote in Austria, where a far-right politician almost won a national contest, to discuss ways to capitalize on the Brexit momentum. Their united purpose is to create a continent-wide movement to dissolve European unity — at best, playing to nationalist sentimentality, and at worst, playing to white fears of migrants and using them as scapegoats for economic woes in the absence of a strong economic left-wing or liberal alternative.

Jews are certainly going to play a role in which direction Europe goes. So it’s important to look at the landscape.

As the Forward reported, Stephen Pollard of Britain’s Jewish Chronicle voiced support for Brexit. In the most recent nationwide election, a Jewish Tory, Zac Goldsmith, in addition to supporting Brexit, stooped to the “leave” camp’s racist rhetoric in an unsuccessful effort to stop Sadiq Khan, a Muslim member of the Labour Party, from becoming mayor of London.

Where do Jews fit into this beyond Britain?

Think of it this way: Dutch far-right leader Geert Wilders, who is calling for a Dutch exit of the E.U., goes to great lengths to oppose Islam from a “Judeo-Christian” standpoint, although he’s never had the strong support of Jews. National Front leader Marine Le Pen shed her father’s Holocaust denial, making her a much more viable politician than he ever was. And in Germany, the populist anti-Islam movement PEGIDA often features Israeli flags at its rallies, signifying that it’s playing to Jewish apprehension about Muslim anti-Semitism.

The right is wooing Europe’s Jews, and for good reason. Being an outward anti-Semite these days just isn’t acceptable, but anti-Islamic fear can play as mere concern about immigration wreaking havoc on the economy and allowing intolerant religious adherents to dilute European enlightened society.

The Jews of Europe, then, become a convenient token for the European right. We’re protecting the victims of the Nazis, the line will go, from the intolerant hordes coming from the east. And surely it’s a message that will work. The soil is already primed for it. Anti-Semitism in France has inspired migration to Israel and much has been written about incidents of harassment of Jews in Turkish and Arab districts of Berlin.

But Jews need to resist this temptation. As I wrote before the Brexit vote, the E.U., for all its faults, at least attempts to enforce human rights codes in order to defend minority groups, of which Jews are one, across the continent. And while some more savvy right-wing parties have shed anti-Semitism and instead adopted hatred of Muslims, others have been more than happy to hate both Jews and Muslims. Hungary’s Jobbik Party is deeply anti-Semitic, and in Greece, the Golden Dawn openly models itself on the Nazis. These parties are not pariahs and are very much the first cousins of groups like National Front and anyone else who seeks to emulate what has just happened in the United Kingdom.

We must remember that we’re not simply talking about extreme politics here. Jobbik and Golden Dawn have been implicated in violent attacks on minorities, and a German court found PEGIDA leader Lutz Bachmann guilty of inciting hate, although he will face a fine and not jail. UKIP leader Nigel Farage doesn’t have the same record, but consider what he said on the night of his party’s victory, that Brexit won “without a bullet being fired.” One, he’s implying that violent confrontation is at least option. But, worse, it’s also untrue, as a Brexit supporter shot and killed Labour MP Jo Cox in the run-up to the vote.

It’s a little too simplistic to say that Europe’s Jews should just move to Israel and be done with it. For one thing, Israel has finite space and resources and extreme politics of its own. More important, Jews can’t abandon Europe. Its cosmopolitanism is part of who Jews are, and Jews contribute to its identity.

Europe’s Jews are proudly part of the fabric of Western plurality and liberalism. Not only should they resist being political tools for the extreme right, they should also be against any agenda that seeks to turn back the clock on multiculturalism, and oppose anyone who uses violence as a means to marginalize minority groups.

Ari Paul is a journalist in New York City who has covered politics for The Nation, The Guardian and many other outlets. Follow him on Twitter @AriPaul