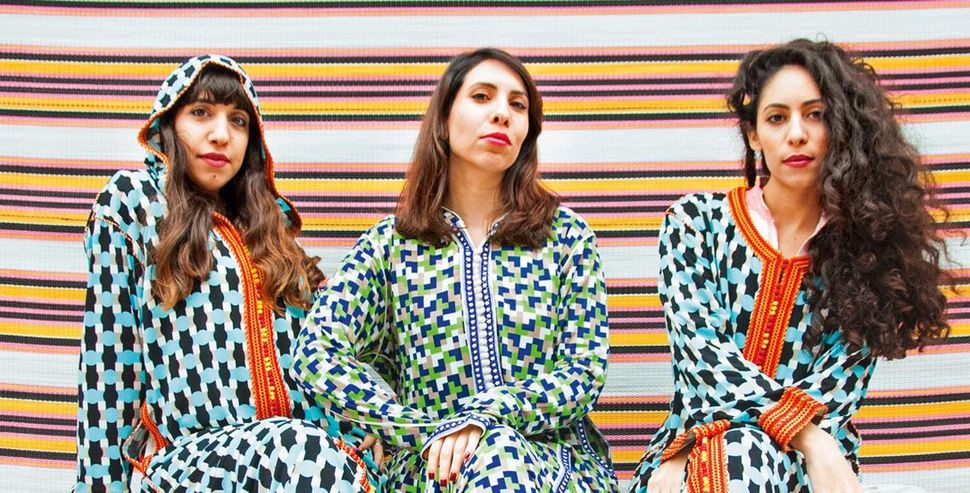 Image by Courtesy of A-Wa

A-Wa, the groundbreaking band made up of three Israeli Yemenite sisters who famously sing in Arabic, has just released its first album “Habib Galbi” in the U.S. The band was listed by Rolling Stone last week as one of the 10 New Artists You Need To Know. The group’s first music video, “Habib Galbi,” has attracted 3.5 million views, and they’ve been covered by NPR, VICE, The Washington Post and other international publications.

For Jews with Middle Eastern and North African roots, A-Wa’s popularity feels like a tremendous accomplishment. Finally, a band that speaks to this largely marginalized culture within Israel and the Jewish diaspora.

A-Wa is part of a larger Mizrahi cultural revival rocking Israel these days; other bands contributing to the revival include Yemen Blues and Dudu Tassa. Looking back to their roots, they sing songs in Arabic, the language of their grandparents. The choice of Arabic has political implications — especially since Mizrahi culture was suppressed and stigmatized in Israel’s formative years, with its Arabic-language music censored on mainstream radio.

Yet the recent international attention directed at these bands raises new questions. Media coverage outside Israel tends to envision these Arabic-singing Israeli musicians as a potential bridge between Israeli Jews and the Arab world. (One article highlighted how “Habibi Galbi” was widely popular in Yemen, a political paradox.) At first, this conclusion seems logical: If more Israelis can appreciate the fact that their heritage is rooted in the Middle East, maybe this can serve as a bridge to understanding how “the Arab is the enemy” has been used not only against Mizrahim, but also against Palestinians.

But what does it really mean to be a singer in Arabic today? Do these musicians have any political responsibility based on the language they choose to sing in? Or is it possible for them to make music in Arabic and then remain relatively separate from the larger conversation about Israel/Palestine?

These questions are complicated because Mizrahi musicians sing in Arabic mostly as a way to return to their heritage. This does not automatically make them cultural ambassadors between Israel and the Arab world — and that seems to be how the media wants to portray them.

The fact is, on the international stage, these bands are interpreted as representing a much more politically significant message than they are actually voicing. The strange paradox within Israel is that you can be proud of your Middle Eastern roots, and even sing in Arabic, but not necessarily be interested in a larger political conversation about the country, the Palestinians or the Middle East. If this is the case with A-Wa, then does the band deserve the cachet it’s gaining as a result of its supposed political resonance?

If you ask me, it’s exciting for Jewish musicians to bring Mizrahi elements and Arabic lyrics to the fore, but the story shouldn’t end there. The Mizrahi revival will only be truly politically significant and internationally mobilizing when the implications extend beyond the Ashkenazi/Mizrahi divide and draw further explicit connections between Mizrahim and the Arab world — including Palestinians.