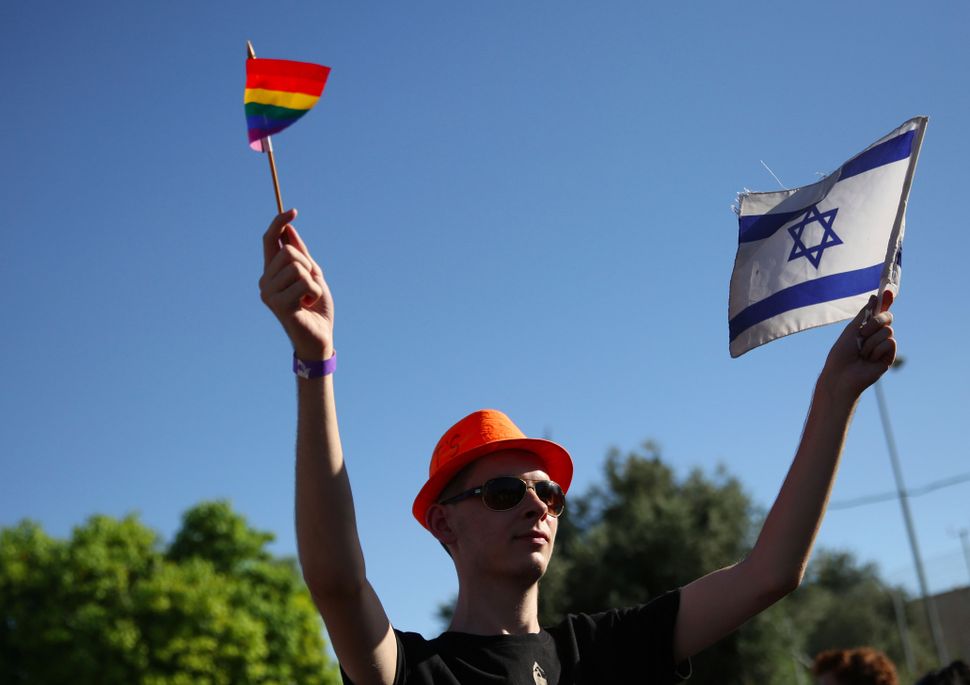 Jerusalem’s gay pride parade, in which I marched on Thursday, was full of contradictions. On the one hand, Israeli politicians competed to show their support for the march. Likud MK Gilad Erdan came with his posse of security guards, and party members waved Yesh Atid banners in the march’s staging area. On the other hand, Jerusalem’s secular mayor, Nir Barkat, demurred because he did not “want to be part of something that offends the ultra-Orthodox community and the religious Zionist community.”

The homophobes who typically protest Jerusalem Pride were barely visible this year. Still, they and their leaders (like Religious-Zionist Rabbi Yigal Levinstein, who called LGBT people “perverts”) were the addressees of angry placards ubiquitous throughout the march. Two young gay men married underneath a wedding canopy, and they danced the whole route’s length. But only moments after they popped a champagne bottle’s cork to jubilant shouting, we reached the memorial for Shira Banki, the teenager murdered by a Haredi man at last year’s march, and we paused in somber silence.

These contradictions are important because they refute the two dominant media stories that internationals tell about LGBT life in Israel.

For right-wingers like Michael Oren, who explained his views in his keynote address to the 2012 Equality Forum in Philadelphia, Israel is a gay utopia, morally superior to its oppressive Middle Eastern neighbors and thus entitled to liberal support. For writers on the left like Sarah Schulman, Israel trumpets its social liberalism to distract from its misdeeds against Palestinians.

But neither story fits queer politics in Israel. For opposite reasons, neither the right nor the left can make room for ongoing, contentious social-justice struggles within Israel.

Right-wingers point out that Israel does not execute gay people, but they rarely discuss Israeli gay rights in any more detail. They neglect to mention, for instance, that gay people cannot marry in Israel (Jewish marriages run through the rabbinate), such that the celebration I saw at the parade, while joyous, has no legal significance. Israeli politicians love to pander to LGBT people, so long as it does not cost them anything. Even the far-right Naftali Bennett wanted to address a rally last year, but he backed out when organizers required he sign a commitment to advance LGBT rights. And despite Likud enthusiasm for pride marches, the Likud government has repeatedly squashed anti-discrimination legislation protecting sexual orientation. As a sign I saw on Thursday said, “Today you protect me; tomorrow you’ll beat me up.” The rhetoric of a liberal and tolerant Israel erases the discrimination and violence that LGBT Israelis face. Frequently, the very same people who celebrate LGBT rights to foreign audiences obstruct them at home.

Curiously, the left would also rather ignore queer Israelis’ struggles. The 25,000 marchers on Thursday in Jerusalem are inconvenient for the anti-Israel left because they suggest that new progressive movements can grow within Israel. Anti-Zionist ideology frequently treats Israel as thoroughly corrupt and broken, and the international left thrives on the viciousness of the Israeli right. As BDS advocate Omar Barghouti says, “We’ve got to give credit to Netanyahu. Without him we could not have reached this far, at this time.” A citizen-organized protest for justice (unlike Pride events I attended in London and Paris this summer, Jerusalem Pride is refreshingly free of corporate sponsorship) suggests instead that Israeli society is fractured and multiple, and also that it might improve itself.

The optimistic sight of West Jerusalemites demonstrating for freedom is also inconvenient for the global left because the left has strategically abandoned progressive Israelis. That is because the radical left’s preferred tactic — boycotts — renders collaboration with Israeli progressives impossible.

In 2005, the first time Yishai Schlissel stabbed someone at Jerusalem Pride, San Francisco groups had called for a boycott of the event. Such boycotts, which have only grown since, send a clear message to liberal Israelis: For the global left to support you, you will have to break radically with your society. Progressive Israeli organizations like the Jerusalem Open House would be completely marginalized if they satisfied boycotters by embracing BDS demands. The same is true of progressive Israeli organizations working on other issues — including Palestinian rights and the occupation. The Israeli right delights in falsely tarring groups like the New Israel Fund with support for BDS, because they know that such a link would destroy the organization’s credibility in Israel. Left-wing boycott tactics implicitly reject the possibility that any change will emerge from within Israeli society.

Obviously, the international left should not paper over Palestinian suffering. Schulman and others correctly object to Israel “pinkwashing” the occupation. But ending the occupation will require not only international pressure, but also a politically viable, powerful Israeli left capable of making concessions to Palestinians.

That means paying attention not only to Israel’s profound injustices, but also to its glimmers of hope. It means supporting Israeli progressives even when they are not specifically fighting the occupation, because you are building a political coalition, not maintaining ideological purity. It means seeing Jerusalem Pride not as a public relations stunt, but as a march worth joining.

Raphael Magarik is a PhD student, freelance writer, cantor and Talmud teacher living in Berkeley. Follow him on Twitter @RaffiMagarik