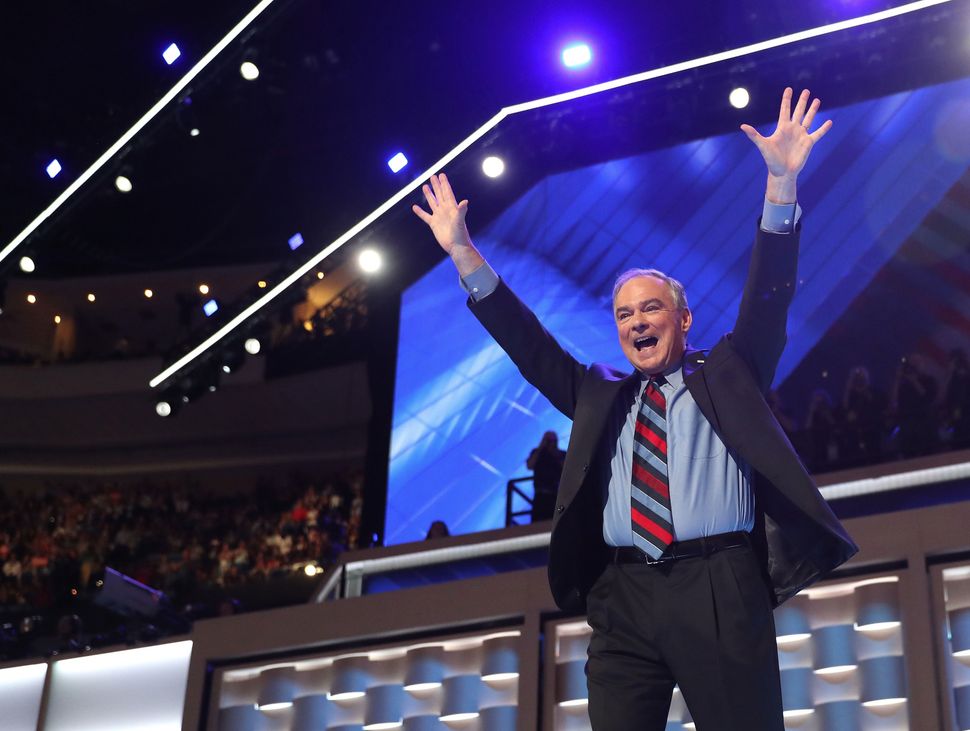 In Lenny Bruce’s terms, Tim Kaine is the most goyish Democratic nominee in years. And I mean that in a good way. In fact, much of the third night of the Democratic National Convention felt more Republican than Democratic — and that is very good indeed.

You remember (or I’ll remind you) how the comedian famously divided everyone up into Jewish and Goyish, not according to religion but according to sensibility. In Bruce’s world, Ray Charles is Jewish, but B’nai Brith is goyish. Never mind that B’nai Brith is made up of Jewish people; its starchy, all-American sensibility makes it less “Jewish” than the soulful Charles (who, of course, was not actually Jewish).

Democrats tend to be Jewish, in this sense. (Come to think of it, one of the most goyish Democrats was Senator Joseph Lieberman, the first Jewish American on a presidential ticket.) They’re brasher than Republicans, messier, less polite, more coastal, more urban. That includes, of course, the diverse communities of color within the party, which share most of those characteristics and are far more “Jewish” than Jewish Republicans at a golf club.

And it’s not just manners. The “otherness” of non-white politicians up to and including President Obama is part of why they are so Jewish in this sense. Intersectionality may be a new term, but Lenny Bruce understood it intuitively.

Which brings me to Tim Kaine, a different kind of Democrat.

Kaine’s speech last night was as goyish as a Christmas sweater. It was folksy, nice (even when he was hurling barbs, he sounded polite about it), and littered with the kind of apple-pie references that are usually more the province of Republicans than of Democrats. Kaine sounded a bit like a throwback, with his aw-shucks humility, rhetorical questions (“Can I tell you a story?”) and, of course, the many references to his deep Catholic faith.

Kaine even used the G-word. A lot. And you get the sense that he meant it.

This Midwestern, white-bread sensibility is a little unfamiliar to many Democrats, and many felt the speech was a little flat. There was an awkwardness in the room when Kaine referred to his faith as “the north star” guiding his political life. And his rhetoric of “faith, family and work” may have confirmed progressives’ worst fears that Kaine is halfway to Republican.

These misgivings are understandable, but the more I listened to Kaine, and watched him work the room, the more impressed I became.

First, to state the obvious, Democrats need to appeal to moderate swing voters, most of whom are Christian, white and religious. If Kaine seems alien to people like me, that’s a good thing, because people like me don’t need to be persuaded. On the contrary, we have to somehow imagine what it would be like to be undecided between Hillary Clinton and Donald Trump, and speak to that audience and their concerns.

Kaine’s middle-of-the-road and middle-of-the-country manner does that. He is a huge asset to the ticket, especially balancing out a candidate who is unjustly (and chauvinistically) maligned as shrill and shrewd. To borrow from Michael Bloomberg’s not-entirely-ringing endorsement, Kaine is sane and competent.

But Kaine’s importance goes a lot deeper than appealing to swing voters. As I’ve written elsewhere, his progressive-Catholic religiosity has the potential to be transformative. He is thoroughly faith-driven and thoroughly progressive. He is the kind of Christian we don’t often see on the airwaves: the liberal kind, motivated by the social justice teachings of his church. Kaine has the potential to confound the false dichotomy between secular liberals and religious conservatives.

In the Jewish world, we’re used to liberals talking about Tikkun Olam, a once-Kabbalistic doctrine that now means simply “repairing the world.” We’re used to secular Jewish leftists like Bernie Sanders, whose religiosity has nothing to do with God but everything to do with pursuing justice. And we’re used to Reform Judaism’s long association with progressive American politics.

But outside our Jewish bubble, the union of faith and progressivism is still radical. And so it was radical to hear Kaine’s middle-America intonations give voice to a message of economic justice, racial justice and environmental justice. Kaine sounded square, but his message was not.

That also goes for Kaine’s use of Spanish. Here is someone who slides effortlessly from folksy Minnesotan-Virginian aphorisms into fluent, properly accented Spanish. It’s almost as if he’s saying to white Americans sincerely troubled by the loss of a certain kind of American monoculture, “Don’t worry, amigos. We’re going to be fine. In fact, we’re going to be stronger together.”

This, of course, is the Clinton campaign’s tagline. (I’m not sure why people keep whining that Clinton doesn’t have a clear message. We are Stronger Together, that is, with all of our diversity and values and aspirations for justice. That seems pretty clear to me.) But Kaine made it real. You can be a square white dude who talks about God and also say, proudly, Si Se Puede. Trump is wrong. The two are not mutually exclusive.

It’s easy to dismiss the “white fragility” of centrist voters, but the fact is that the fears are there, and they are grounded in reality: America is becoming a less white, more multicultural place. If Kaine can make multiculturalism, or at least bilingualism, safe for some of those Americans, that is a potent weapon against Trump’s nativism and fear-mongering.

For progressives, Obama gave the strongest speech last night. We miss him already — his class, his intellect, his shattering of boundaries and assumptions. The arena Wednesday night was like a love-fest.

But for moderates, independents and Republicans, the assumptions Kaine shattered might be more important. On the surface, it might’ve looked like he was there to soothe the swing voters. Beneath that surface, however, he was troubling the waters.