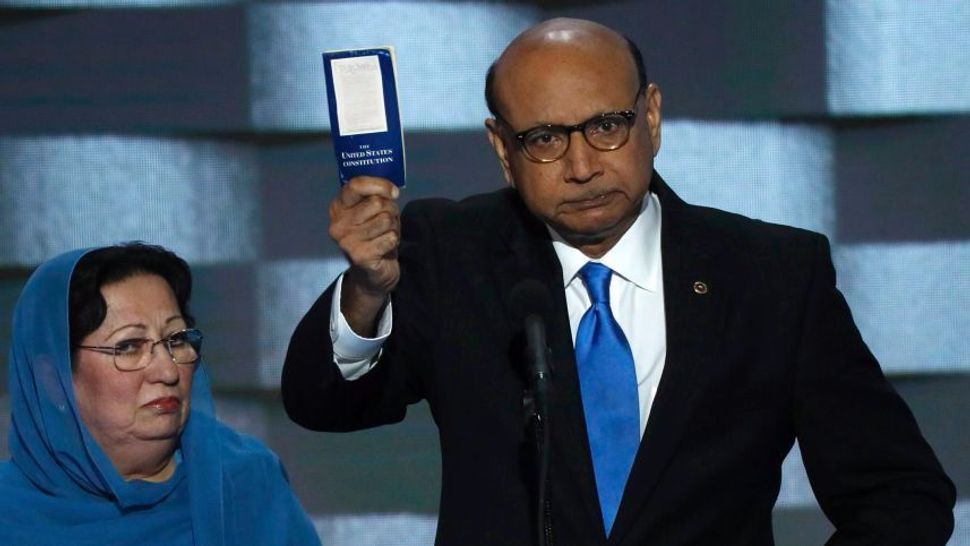 For a society to sustain itself as a moral entity, its inhabitants need, at the very least, three attributes: sacrifice, shame and empathy. Every major faith embodies these features, creating mechanisms to promote sacrifice, shame those who violate the society’s norms, and reward the empathetic impulses that encourage us to transcend our inherent selfishness.

That Donald Trump lacks these three attributes, that he misunderstands sacrifice, has no shame, and denigrates empathy, was once again confirmed this past weekend, in his response to the powerful and heartbreaking words from Ghazala and Khizr Khan, Muslim immigrants whose son died fighting for the U.S. in Iraq.

His snarling retort to Ghazala Khan — implying that she didn’t speak at the Democratic National Convention because she was muzzled by her religion — was best answered by Ghazala herself, in an opinion piece in The Washington Post on Sunday. “Walking onto the convention stage, with a huge picture of my son behind me, I could hardly control myself. What mother could?” she wrote. “Donald Trump has children whom he loves. Does he really need to wonder why I did not speak?”

Sadly, Trump’s behavior shouldn’t shock us anymore. This inexcusable insult is only his latest outrage. If he thinks that building buildings and employing people while growing rich himself is sacrifice, as Ghazala Khan wrote, “he doesn’t know what the word sacrifice means.” If he is not ashamed of denigrating the Khans and cannot empathize with the plight of the many Gold Star families who have lost loved ones fighting wars most of us can safely ignore — well, shame and empathy aren’t in his vocabulary.

By now, we should know that about the Republican nominee for president. What so disturbs me is that nearly half of the country appears ready to vote for him.

Whatever happens in November, Americans need to do some serious soul-searching, because the Trump phenomenon didn’t spring from nowhere. This willingness to discard the foundational stones of a healthy society has been building for years, from both the left and the right, from liberals and conservatives, with enough blame to go around and around.

Conservatives have lacked empathy for the poor, for minorities and the disenfranchised, and for anyone caught in their culture wars. Liberals have been allergic to the uncomfortable but necessary power of shame to create societal norms of behavior and trust. And very few of us, it seems, want to sacrifice much anymore — whether it’s higher taxes to pay for health care for the working poor, a curtailment of rights to keep everyone safer, or the ultimate sacrifice, the Khans’ sacrifice, of risking death when defending the nation.

Technology has unbound us. That was inevitable, and technology has advanced our lives in so many ways, but we weren’t smart or bold enough to create mechanisms to ameliorate the troubling social consequences. I’ve long felt that President George W. Bush had a unique opportunity to really secure America on Sept. 12, 2001, when he should have announced the resumption of mandatory national and community service for all American high school graduates.

I look to Israel and see the way service in the Israel Defense Forces binds the nation as an important example for us. In practice, it is not universal, it’s certainly not perfect, but the mandatory draft provides an essential civic function as well as a military one. It’s what my father’s generation had during World War II, and it’s what made them truly great.

Had we begun first to create opportunities for 18-year-olds from across the country to participate in the military or serve at home, had we then required those commitments to forge a sense of national purpose, now — nearly 15 years later — we might well have been a nation willing to sacrifice, to hold each other accountable and to empathize with the other.

Instead, we have Donald Trump and his shameful tweets.