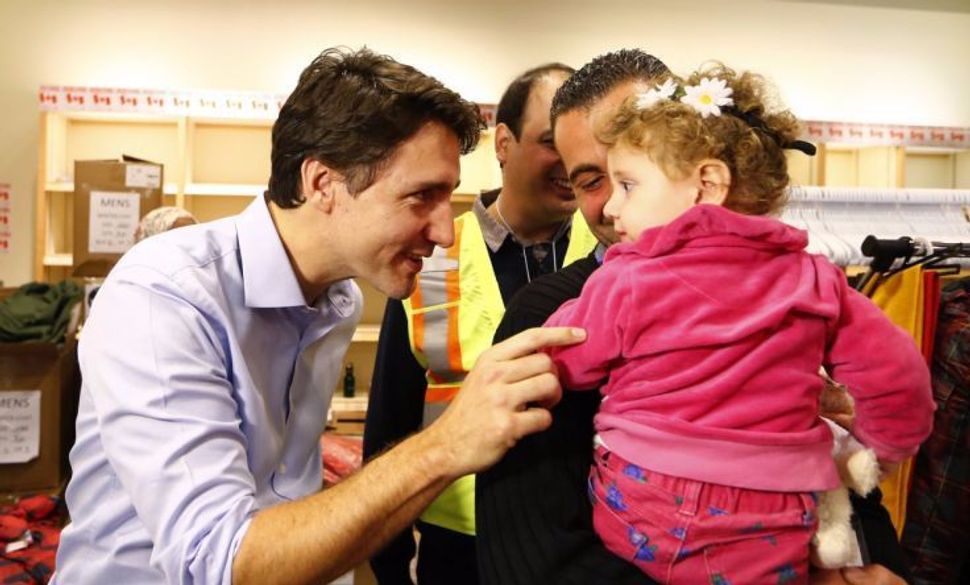 The thing about bullies is that, in the best-case scenario, they force their victims to declare their own agency. That’s what happened this past week with Ghazala Khan, who penned an op-ed in The Washington Post after Donald Trump callously questioned why she did not speak as she stood alongside her husband at the Democratic National Convention. For seven minutes, her husband, Khizr Khan, had delivered an unforgettable tribute to their son — an American soldier who fell in Iraq — while issuing a sharp rebuke to Trump’s peddling of Islamophobia and general xenophobia. To Trump, who has called for banning Muslim immigration, Khan was direct: “You have sacrificed nothing.”

It was a strange experience for me, watching all this as a Canadian. We Canadians have also suffered through our share of Muslim-baiting in the lead-up to elections. Last year, then-Prime Minster Stephen Harper was roundly criticized for making comments about mosques being potential breeding grounds for terrorism. The government’s pledge to create a “hotline” to report “barbaric cultural practices” was widely seen as a jab at the country’s Muslim population. As commentators have pointed out, there are already laws against violence and there are already ways to report it (dialing 911, for starters). In 2011, the government had barred women from wearing the niqab at citizenship ceremonies. As the 2015 elections approached, and promising he would outlaw the niqab among public servants, Harper went head-to-head with the Federal Court of Appeals, which had overturned the swearing-in-ceremony niqab ban. All this led Canada’s national newsmagazine to dub the 2015 race “the niqab election.”

Just as Trump’s bullying pressed Ghazala Khan to speak out, politicking over the niqab led Canadian Muslim women to speak up: “The government is trying to force me to unveil myself. That is actually the oppression,” said Zunera Ishaq, who fought for her right to wear the veil at her citizenship ceremony.

By the time October rolled around, Canadian voters seemed to have tired of what became known as the “Harper style.” We ushered in a more compassionate government, a Liberal one led by Justin Trudeau.

With Canadians now clamoring to help sponsor Syrian refugees — opening wallets, hearts and homes — we have found ourselves scratching our heads at the stinginess of our wealthy neighbor to the south when it comes to welcoming those in deepest crisis. Under a Trump presidency, that stinginess promises to be joined by pettiness, meanness and a lot more bullying.

Reflecting on Khizr Khan’s challenge to Trump about personal sacrifice, Forward editor Jane Eisner writes of Israel’s compulsory national service as a model for America. While any country could benefit from unifying service projects, we must remember that the Israel Defense Forces is one of the institutions that, despite its integrationist ethic, ends up underscoring some of the most problematic social schisms in the country. It’s not uncommon, for example, to see a help-wanted sign asking for “post-army” service applicants. In the civil-rights world, that’s known as code for Arab-citizens-need-not-apply. And Israelis, of course, know all too well about social divisions being sown during elections. In the March 2015 election, Netanyahu did his own race-baiting as he encouraged his supporters to vote by announcing that “the Arabs” were coming out to the polls “in droves.”

Instead of looking to Israel as a positive counterexample to the America that prepared the ground for a Donald Trump, I’d recommend looking to Canada.

In theory, America’s ethos has been that of a melting pot of nations, ethnicities and creeds where no one is to be understood as any less American than her neighbor. But, whether in a calculated or chaotic way, Trump is doing all he can to undermine that ethos.

Trump, his supporters, and really all Americans would do well to remember that vilifying one subset of the citizenry chips away at the bedrock of democracy. And as Trudeau has shown with his warm embrace of Syrian refugees, a country is stronger for opening its gates to those who are suffering and who generally go on to contribute to building a better society. As a Jewish Canadian whose grandparents, fleeing the burning ground of Europe, arrived with many others at the shores of Halifax, I have lived this experience directly.

It remains to be seen whether U.S. voters will gravitate in fear toward Trump’s demagoguery or turn their backs on his very un-American spirit. Until then, we must amplify the voices, like those of the Khan family, who remind us what it means to possess pride, patriotism, dignity and strength of spirit in an adoptive country.

Mira Sucharov is associate professor of political science at Carleton University in Ottawa, Canada. Follow her on Twitter @Sucharov