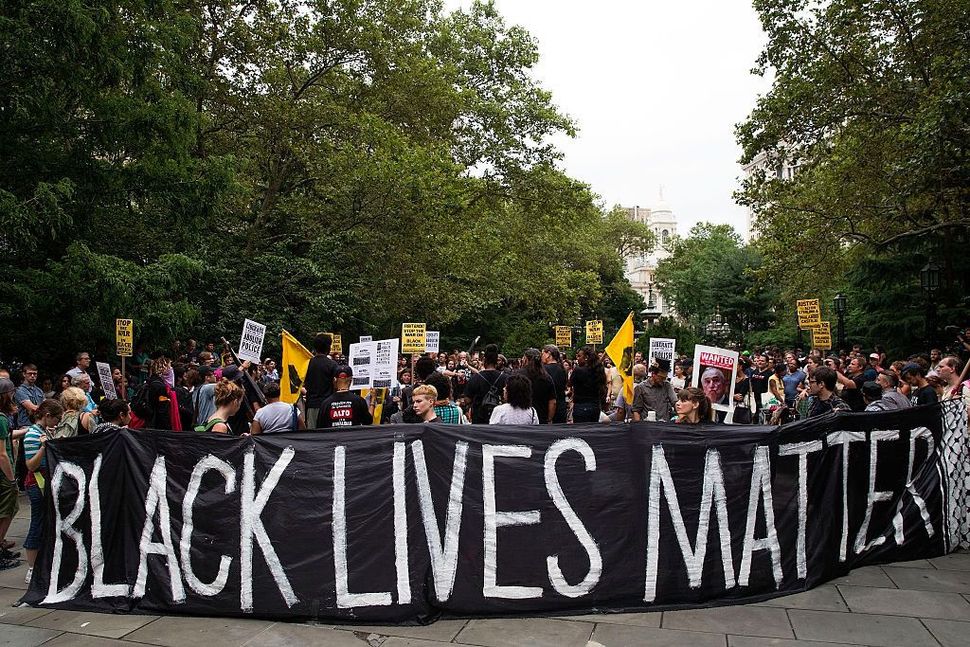 Black Lives Matter put out a policy platform this week, with demands for reforms in six areas, with specific policy proposals on the state and federal levels. It’s good that the leadership is moving from slogans and rallies to tangible policy, and there are many good ideas in what they released. But I was dismayed and disheartened to see the most prominent voice for racial justice in the U.S. adopt a hateful, un-nuanced, biased and totally unrelated position on Israel, calling Israel a perpetrator of “genocide” and an “apartheid state.” It is neither.

By including these hateful and incorrect ideas into their policy platform for creating racial justice in the United States, the activists were co-opted into a global attempt to delegitimize and harm Israel and the Jewish people.

If activists within the Movement for Black Lives held views that I disagreed with or found abhorrent, I would not necessarily lift my voice. Part of social justice work means finding common ground with those we disagree with. But when a group publishes a thorough, footnoted, beautifully designed policy platform that so clearly targets Israel and is egregiously one-sided, I cannot remain silent.

Why single out and bash Israel and no other country?

Do the organizers of the Movement for Black Lives know that today, in Mauritania, Somalia, Eritrea and Sudan, there are an estimated more than 1 million black bodies actually enslaved — as in chains, whips and forced labor? LGBT folks are executed in Iran, dissidents tortured in North Korea, civilians starving in Venezuela…yet none of that was worth a mention? If this movement is going international, how can it stay silent on all these horrific injustices?

As Black Lives Matter has taught me, the words we use have profound consequences for the social reality around us and for the human bodies living within that structure.

Jewish bodies have been murdered, raped, experimented on and derided by the millions over the past several hundred years. And 57% of religious hate crimes in the United States are directed at Jews, who form less than 2% of the national population.

Calling Israel an apartheid state when it’s not, calling Israel and those who support it perpetrators of genocide when they are not, is more than inaccurate: It puts my life and the life of my people at risk. It flames hatred, incites violence and perpetuates anti-Semitism.

Israel isn’t perfect. Palestinians living under military rule without democratic rights for decades is deeply unjust and needs to change. But the completely one-sided, often anti-Semitic undertones that run through the BDS movement and now perhaps the Black Lives Matter movement are not the solution.

This leaves me here: I will continue to work for racial justice in the U.S. I will continue to do what I can as a privileged white male to level the economic playing field, advocate for reform in our criminal justice system, support reparations, end capital punishment, stop the militarization of police, support public schools, reform our drug policy, protect voter rights, and more.

But I don’t feel right doing it with Black Lives Matter. Not until they check their own assumptions, biases and prejudices.

Ari Hart is a founder of Uri L’Tzedek: Orthodox Social Justice and a rabbi at the Hebrew Institute of Riverdale.