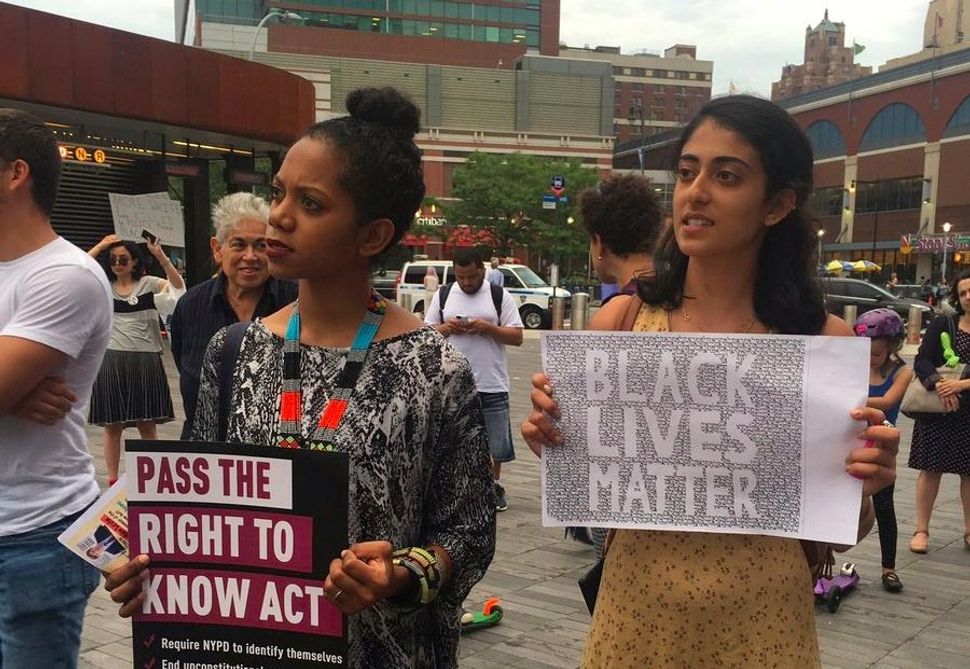 I am not worried about the future of the Jewish people. We spend our time, our brainpower and a significant amount of money attempting to solve the problem of Jewish continuity, but I am not concerned. Judaism moves, compels and speaks to a new generation of Jewish leaders.

Most recently, I was heartened by the presence of nearly 100 Jews — mostly Millennials — from the Washington area who gathered for an event called “Jews Say Black Lives Matter” at the end of July. Organized by a group of young Jews, the event had no institutional or organizational ties. The meeting occurred in the un-air-conditioned basement of a Unitarian church on a boiling hot D.C. afternoon. Space was tight, as the organizers were expecting 20-30 friends to gather for a conversation about race, Judaism and activism.

Instead, they were greeted with an overwhelming response. Activists deeply entrenched in the social justice community in D.C. sat beside first-timers who explained that the recent spate of shootings of unarmed black men compelled them to engage.

But how to engage? In a moment when simmering racial tension is boiling over for the second summer in a row, it’s difficult to know where to go, how to help, what to demand. How do white Jews stand up as allies while respecting that we cannot know the experience of being a person of color in America? How do we ensure that Jews of color feel comfortable and safe participating in these difficult conversations? How do Jews honor a legacy of being partners in the fight for civil rights in America, while recognizing that the world has changed since Rabbi Abraham Joshua Heschel marched with The Reverend Dr. Martin Luther King Jr.?

These are complex questions to confront, and they are even more challenging to answer. Still, if all of those who showed up on a sweltering Sunday are any indication, the desire to uphold the Jewish legacy of activism and advocacy is alive and well. All of those who turned to the Jewish community as an entry point to activism demonstrate this desire. They are looking for a way to engage in justice work as Jews. This cuts across generation and denomination.

We need to uncover how to organize the Jewish community. Yes, there was beauty in the organic nature of a crowded meeting of Millennial Jews looking for a place to raise their voices. We must work to bring this group into the larger Jewish communal conversation. Not for their membership dues, nor to guarantee future Jewish babies, but so that their voices will strengthen our collective call for change.

This requires building relationships. It requires Jews who spend their days in the Jewish organizational world to come downtown, to meet the Jews who are making their own Shabbat dinners, who are defining their own urban Judaism, who are living their Jewish values in nonprofits and through volunteer work around the city. It requires honoring the expertise of young activists, schooled in the language of intersectionality, who have developed activist tool kits that are best equipped to respond to this unique moment. They can and should lead. They have honed their skills on embattled college campuses and they have a great deal to teach.

The relationship building must go both ways. The leader of the discussion stood at the front of the room, with a kippah on his head, and said that he had never heard a rabbi say, in a sermon, that, “Black Lives Matter.” His statement revealed that he was not aware that this conversation is in fact echoing off of sanctuary walls. We need to get to know each other inside the Jewish community in order to best stand together with those outside of the Jewish community.

Jews of all generations still feel that call to make change, still seek that sense of purpose. Judaism can provide the moral impetus, the inspiration and the community through which to enter into the work. We are stronger when we stand together, when we act as a collective, when we are united against injustice. The world needs us to raise our voices. If that is our calling and our purpose, I am not worried about the future of the Jewish people.