Politics From the Pulpit? Be Careful What You Ask For in the Age of Trump 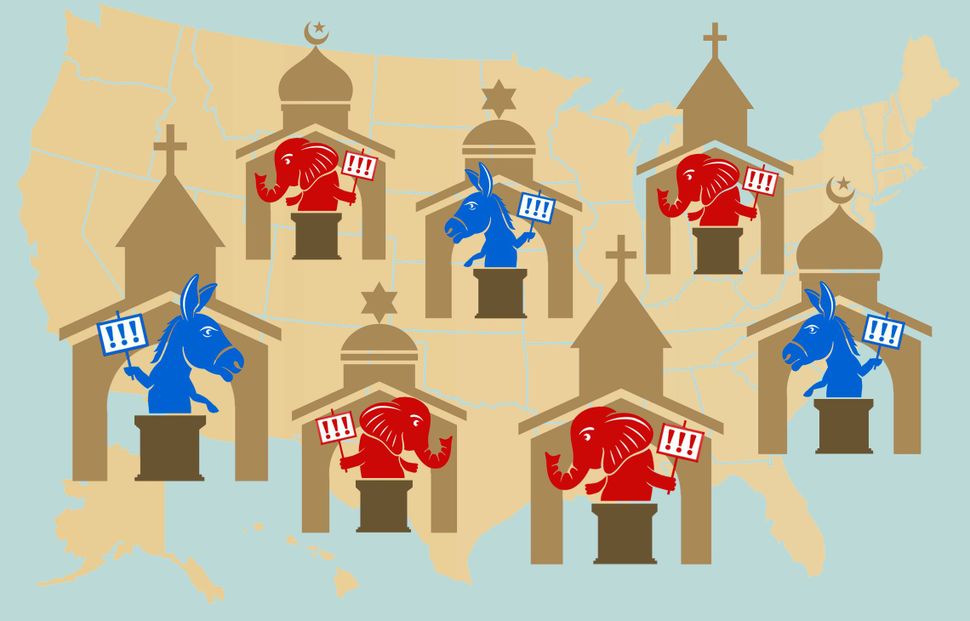 For years, conservative evangelicals have argued that federal law should be changed to permit churches to be more politically active, including allowing their preachers to endorse candidates from the pulpit.

But this year, they may want to be careful about what they ask for. Ironically, in the Age of Trump, it’s the more liberal churches that are doing the politicking.

Donald Trump himself pushed this issue farther than his predecessors. When accepting the Republication nomination for president, he vowed to repeal the six-decade-old amendment barring tax-exempt houses of worship from endorsing or opposing candidates for public office.

Our “laws prevent you from speaking your mind from your own pulpits,” he said in addressing the white evangelical Christians who comprise a key segment of his support. “I am going to work very hard to repeal that language and protect free speech for all Americans.”

Trump’s fellow Republicans — or at least those in charge of shaping the party platform — agreed with him, adding a call for the repeal of the so-called Johnson Amendment into the document adopted at the Cleveland convention, for the first time ever.

By turning “repeal” into a rallying cry, the Republican nominee and his supporters are ginning up an old argument designed to appeal to voters who perceive their religious freedom as continually curtailed by an overreaching liberal government.

Perhaps they don’t realize that few Americans want pulpits to function as campaign stops, and ministers and rabbis to sprinkle candidate endorsements in with their scripture. And perhaps these pro-Trumpers aren’t aware that many of the clergy who do bypass the existing rules and promote a candidate are not at all in favor of their guy.

This is one of those calls to action that is more dog whistle than doable. Repealing the 1954 amendment is a terrible idea for a zillion reasons, and fortunately, it is one that can’t happen with a swoop of any presidential pen. Congress would need to act on several fronts.

The amendment applies not only to houses of worship but to all 501(c)3 not-for-profits, and overall has been remarkably successful in keeping U.S. charities from direct involvement in partisan politics. (It applies to the Forward, as well, which is why we do not endorse candidates for political office.) It’s not at all clear whether Trump wants to repeal the restrictions only for religious institutions, which would raise serious legal objections, or all non-profits, which would cause minor chaos in our political system.

As Emma Green wrote recently in The Atlantic: “Realistically, it seems unlikely that a President Trump would be able to push this repeal through Congress — it would pose immense political and legal challenges for legislators, Republicans and Democrats alike.”

Never mind the fact that there seems to be little public appetite for a wholesale change in the Sabbath status quo. Less than a third of Americans believe that churches should endorse political candidates.

And according to a Pew Research Center survey released Monday, when churchgoers do hear a political sermon, more often than not it is about issues such as homosexuality and immigration, not a directive to cast a particular vote for a particular person.

“Most people surveyed say political speech is the exception, not the rule, in their churches, synagogues, mosques or other houses of worship,” Pew reported. “Indeed, more than three-quarters of those who attended religious services in the months leading up to the survey say their clergy discussed social and political issues only sometimes, rarely or never.”

But where is political speech more common, even including direct candidate endorsements? Why in black Protestant churches — not exactly Republican territory in this election (and perhaps not exactly legal, either.)

Pew reported that among black Protestants who have been in church recently, 29% have heard clergy speak out in support of a candidate — mostly Hillary Clinton — and an equal share have heard religious leaders speak out against a candidate. That would be Trump.

Even neutral political activities such as calls from the pulpit to register to vote are heard more in African American churches than in any other Christian group or denomination. (Jews and Muslims were too small a number to be broken out in the survey’s analysis.)

Echoing that trend, a national survey released in May by Indiana University found that political activity was notably decreasing in conservative churches and increasing in liberal ones. In 2012, for example, 80% of liberal churches participated in at least one type of political activity, making them three times more likely than conservative churches to be politically engaged. In fact, white evangelical churches accounted for the most substantial decrease in political participation.

This year, Hispanics are not expected to be rabid Trump voters, either.

Irony aside, the steady rise of political activity in liberal churches belies the argument that somehow the prophetic voice is being stifled. It is also proves what many have suspected all along — that the federal government has little interest in prosecuting the political preacher, of whatever persuasion.

Rather than seek to repeal the Johnson amendment, we’d all do well to recognize how it has strengthened the individual realms of faith and politics. Even in the breach.

Politics From the Pulpit? Be Careful What You Ask For in the Age of Trump