This past Tuesday, Donald Trump told crowds at a North Carolina rally that “if [Hillary] gets to pick, if she gets to pick her judges, nothing you can do, folks. Although the Second Amendment people, maybe there is, I don’t know.” The statement was widely greeted with shock: suggesting that violence should be used against a potential President Clinton or her Supreme Court Justices, many agreed, was a new low in Trump’s presidential campaign

It made me think of a March rally Trump held at St. Louis’s Peabody Opera House. It was, at that point, one of the events of his campaign most seriously marked by violence. 32 arrests were made – all of protesters – and Trump made some of his now-notorious winking, vague endorsements of violence.

“They can swing and hit people, but if we hit them back, it’s a terrible, terrible thing, right?” he asked. “There used to be consequences to protesting. There are none anymore.”

The frightening implications of Trump’s incitements to violence and disrespect were clear across certain boundaries, specifically racial ones.

Trump fans at the event were heard trashing Black Lives Matter, and the arrest of his racially diverse protesters echoed the widespread, little-justified arrests of black protesters after Mike Brown’s killing in 2014 – and economic ones. (In The Nation, Umar Lee wrote an analysis of the rally that provided a thorough background to the economic strife that helped shape responses to Trump’s appearance.)

I followed the event from New York City, having moved there from St. Louis the previous September.

Beyond the violence and division on display, one of the things I found profoundly disturbing about the event was the fact that it happened only a few blocks away from the building where, in the spring and summer of 2015, I’d spent Sunday mornings volunteering with a local Batterer’s Intervention Program.

That proximity made me concerned about the threat of a different kind of violence, less obvious in that context but prominent across Trump’s campaign: that of violence against women. 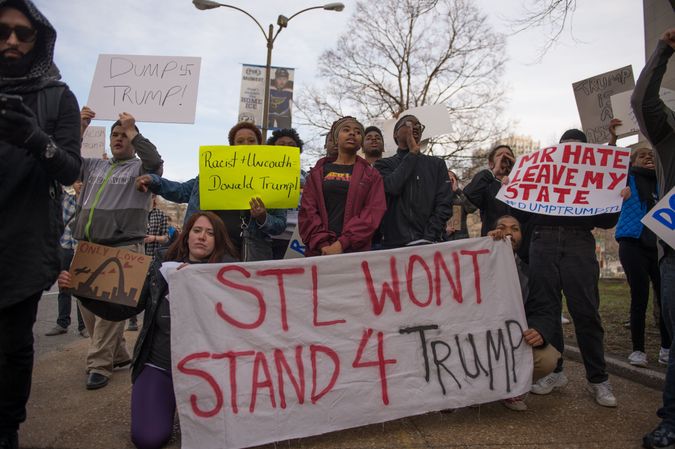 Image by MICHAEL B. THOMAS/Stringer

Batterers Intervention Programs, known as BIPs, exist across the country. They work to prevent recidivism in people – mostly men – who have been violent towards their partners or other members of their families. Almost every member of the group I worked with had been court-ordered to complete the program.

We operated with a few key beliefs: violence against women is rooted in a set of oppressive cultural ideas and practices, including but not limited to damaging norms for both genders, every individual is solely responsible for all of his or her own actions and feelings, and physical violence has its roots in abusive behavior, which we defined as any behavior that, regardless of its intent, controls another person or inhibited them from making a free choice.

It was hard work. It took many participants upwards of a year, or even two, to make it through. It was a flawed program, and it didn’t work for everyone, but I had tremendous faith in it.

As a female facilitator, I saw the difference in the men’s behavior towards me. They learned to call me by my name, not to speak over me, and to make eye contact with me when they responded to my questions rather than directing their answers to my male co-facilitator. I also saw enormous changes in the way they thought about their own behavior and emotions.

They became better able to identify actions that might be abusive, better at bringing themselves down from anger in healthy, non-abusive ways, and better at empathizing with the women in their lives.

I felt that what I saw from afar at that Trump rally posed an enormous threat to the vision of society that our small BIP, and its many fellows around St. Louis and around the country, were working towards: one in which everyone, regardless of their gender, learned to hold themselves accountable for their actions, be emotionally open with themselves and with others, and strive, nonviolently, against systems of oppression. And that threat reached a new peak this week when Trump’s comments about the Second Amendment.

The problems with Trump’s statement go beyond the not-quite-explicit encouragement of attempts on the lives of either Hillary Clinton or justices in the United States courts.

The statement plays into every factor that normalizes violence against women. It was designed to inflame a sense of entitlement, and provoke listeners to see a failure on the part of a woman to satisfy that sense as a crime they would be entitled to punish.

It poses physical violence as not only the natural but the right response to anger. It insidiously suggests that if Clinton were elected President, her claim on that position would be invalid.

That last claim is one Trump has explicitly reinforced by predicting the election will be that most elusive of all things, “rigged,” and it’s important because violence against women is often rooted in behaviors designed to undermine a woman’s power. (Commonly, for instance, by restricting her access to money.)

By suggesting Clinton’s claim to the Presidency would be less legitimate than that of himself, a man, Trump did and does exactly that. (It’s important to note that Trump has also been accused of sexual violence multiple times, including in a case filed this June by an anonymous plaintiff who states that Trump raped her when she was 13 years old.)

Whether or not Trump becomes President, his threat to Clinton, and the gendered, abuse-encouraging rhetoric he consistently uses against her, works to confirm the often unconscious pre-existing ideas about women that are significant contributing factors to violence against women.

He is telling men that taking illegal, physically violent action against women to defend what they see as their entitlements isn’t just OK, it’s almost a right.

Rarely, in recent decades, has a man whose rhetoric is so subtly damaging occupied so prominent a public stage. By supporting him, crucially, the Republican Party is reinforcing his message. Long after this election, women far less high-profile than Clinton will be left to deal with the consequences.