Republicans Want To Teach the Bible in Public Schools. But Which Bible, Exactly? 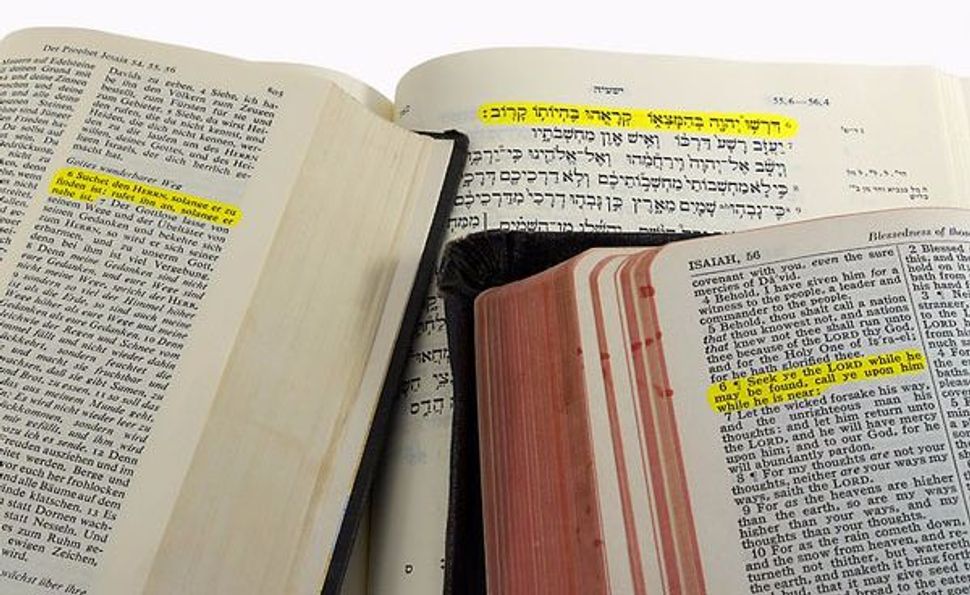 The Republican Party’s new platform calls for teaching the Bible as literature in public schools. But which Bible, exactly, would the Republicans approve of?

The idea of the Bible taught in public schools has a fraught Constitutional history. For the Jewish community, it can bring back memories of “prayer in the schools” or mandatory participation in school Christmas pageants. But the absence of naming a particular translation is something different. It reveals a troubling lack of awareness of how much the particular Bible we read shapes our worldviews — and an ignorance of the gulf between the Hebrew Bible and its translations into English.

For many Americans, the choice of which translation we read is made by a local pastor, a community rabbi, or the edition with the most striking cover. I spent close to a decade reading and thinking about the various translations of the Bible, and observed that the differences between Biblical translations from various faith traditions and centuries range from the factual to the profound.

There are the truly poor, problematic and error-filled translations, exacerbating centuries-old biases rooted in mistranslation. (Moses with horns comes to mind.) Or consider the famous “thou shalt not kill,” which is not what the Hebrew Bible says. The Hebrew is lo tirzach, or “thou shalt not murder”; self-defense and killing during war are clearly sanctioned by the Hebrew Bible, with many verses dedicated to the details.

Why does this matter? In the charged national debate we are now having on gun control, the translation of just this one line could be crucial. It could influence students’ views on the death penalty as well as what constitutes a just war. And there is a strangeness to insisting that the Bible be part of citizenship: If this common and misleading translation is taught, the idea that we cannot and should not kill those coming to kill us is almost certainly not an idea the Republican Party wants to promote.

But translations aren’t only about right and wrong; by considering how different people have struggled to explain the Bible in the past, we can develop a richer understanding of the most important text in Western civilization. Using some of the techniques that literature teaches us might allow us a rare and sorely needed opportunity for frank and open conversation about different points of view. If several translations of the Bible were considered, along with the Koran and other texts considered holy by many Americans, it could be a chance for a discussion on where beliefs come from.

Consider a comparative discussion of the Ten Commandments. Many Americans don’t realize that “The Ten Commandments” doesn’t mean the same thing to everyone. Catholic translations generally have two of the ten devoted to covetousness; most Protestant and Jewish versions have just one commandment for covetousness. Whereas “I am God” is generally counted as the first commandment in Jewish tradition, in most Protestant and Catholic Bibles, “thou shalt not have other gods before me” is the first commandment. What is at stake in the translation is a view of God. The idea of multiple and differing views of God may not be such a bad thing to teach; it gives us a richer sense of what makes each faith tradition unique and is also the foundation of religious tolerance.

Like listening carefully, reading closely is an endangered skill in our political moment. What might happen if students were taught three versions of Genesis 1, instead of just one? For starters, they would encounter different accounts of the beginning of the world. The 1611 King James, which has influenced centuries of literature and thought, starts like this:

In the beginning God created the Heaven, and the Earth.

It’s past tense, and with a period at the end. But the Jewish Publication Society translation from 1985 reads the same passage as a clause:

When God began to create heaven and earth—

That “began to create” gives the reader the sense that creation is still going on. But what exactly God was creating, or created, also depends on the translation. The 2001 Good News Bible, often distributed free of charge, has not “heaven and earth” but this:

In the beginning, when God created the universe.

Just by reading translations, and reconsidering a favorite phrase of politicians — “the Bible says” — students could become more skeptical and perhaps more open. And while this may be too much to hope for, reading translations of the Bible can alert students to the importance of studying foreign language — something long in decline in America. If anything can facilitate global understanding at a time when we all really need it, it is the study of language, still the fastest expressway to another way of seeing the world.

Republicans Want To Teach the Bible in Public Schools. But Which Bible, Exactly?