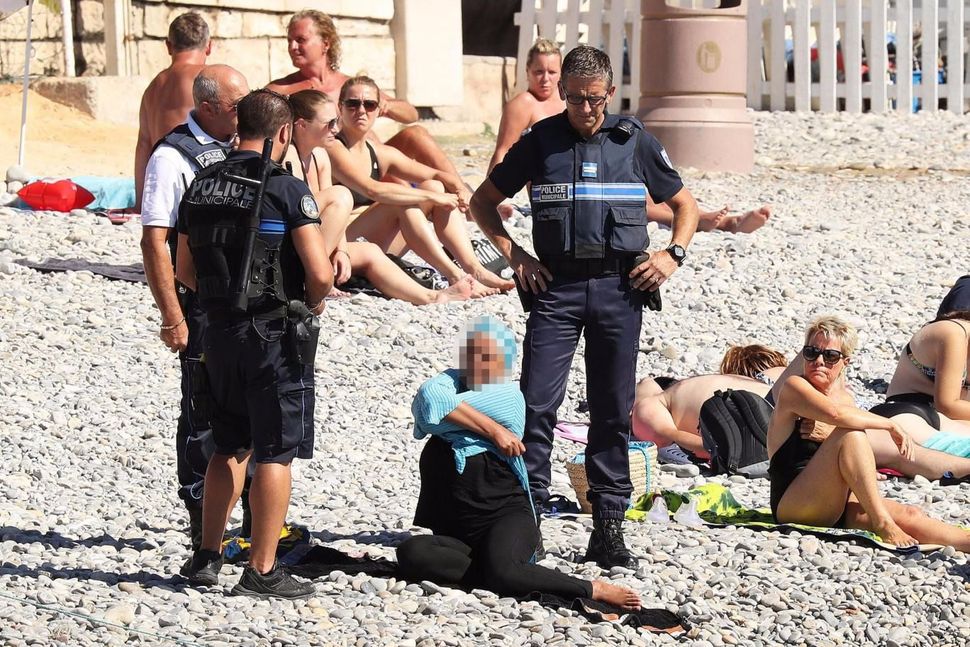 No matter how progressive our society has become, a woman’s appearance is still scrutinized, commented upon, critiqued, evaluated and dismissed far more frequently than anything said about a man.

But this double standard isn’t simply being exercised by those who weren’t brought up with any manners, or lost the memo telling them that whether a woman is “ugly” (Fiorina) or “tired, old and mean” (Clinton) has nothing to do with her fitness for anything, including the presidency of the United States.

No, what’s even more dismaying is that we continue to witness a double standard imposed and regulated by public authorities.

So in the last few weeks, the mayors of several coastal towns in France decreed that women are not allowed to wear a “burkini” — a full-body swimsuit worn by observant Muslim women, enabling them to follow their laws of modesty while at the beach or in the water. On August 23, French police forced a woman to remove her burkini on a beach in Nice. Because, well, it’s not French not to show lots of skin.

Meanwhile, Egypt’s state broadcaster suspended eight female television presenters for being overweight, giving them a month to lose an undisclosed number of pounds. Because, you know, Egypt wants its TV (female) personalities to look svelte.

And in Petah Tikva, Israel, the administration of a public all-girls high school decreed that all 1,000 students may no longer wear skirts that stopped below the knee; instead, their skirts should drop down to the floor, “kissing the ground.” Because, apparently, it ruins the school’s “educational work” to allow any physical evidence that a 16-year-old girl has ankles.

What’s instructive about these three different examples is that the government regulation is not motivated by any one specific political or religious ideology. The French move against the burkini — echoing the 2010 ban on face coverings in public places — comes from the secular left. The school in Israel is pushing from an increasingly fundamentalist right wing.

Women are being dictated to and squeezed from all sides. Beyond the strictures of social norms — and they are powerful in many countries — the use of the tools of government to enforce dress codes and standards of appearance is becoming increasingly prevalent in countries where the men in power see their domination and sense of national identity slipping away. And this is true for the secular left as much as the religious right.

In fact, according to a fascinating survey released in April by the Pew Research Center, more countries restrict a woman’s ability to wear religious symbols or attire than require them to dress or cover up in a certain way.

Of the 198 countries in its survey, the Pew Center found that 50 had at least one law or policy regulating women’s religious attire in 2012 and 2013, the two most recent years for which data are available. While, in about a quarter of those countries, women were required to wear a particular dress, more than three-quarters of those countries — 39 of the 50, or 78% — limited a woman’s ability to wear religious garb.

The restrictions were most common in Europe — and this survey was compiled before France’s latest, outrageous ban — but they weren’t on view exclusively there. Until 2012 in Egypt, for instance, women who worked for the national airline were not allowed to wear hijabs at work. It’s not a stretch to see the directive to diet sent to Egypt’s female broadcasters as another example of the government seeking to impose its own formulation of secular beauty on its (female) employees.

Some restrictions strike me as reasonable. Pew found that in Canada, for instance, candidates for citizenship had to remove face-covering veils so that the authorities could see whether they actually recited the oath.

But it’s a gigantic, unwarranted leap from a one-time, understandable requirement to forcibly stripping women of their clothing while on a public beach. Exactly how do they harm anyone by covering their arms and legs?

Any pluralistic society is subject to the push-and-pull of minority groups seeking to maintain their distinctiveness and the nationalistic impulse for cohesion and unity. As Arnold Eisen, chancellor of the Jewish Theological Seminary, asked in a recent blog post on Huffington Post, “How much distinctiveness can the larger society tolerate before it breaks apart into the separatist communities that French officials so fear right now?”

As Amanda Taub pointed out recently in The New York Times, “Rules like this summer’s burkini bans are meant to prevent the widening of French identity by forcing French Muslims not only to assimilate, but also to adopt the narrower, rigid identity.”

That same desperate impulse to exert control is laced through the letter sent by the rabbi who heads the girls’ school in Petah Tikva to explain the new dress code. “We’ve tried everything” to focus the students’ attention and respect on their studies, he bemoaned.

As if narrowing the apparel choices of girls and women will somehow persuade them to conform to a single image of identity, mode of behavior and rigidity of thought. Anyone who’s raised teenagers knows that it’s bound to backfire.

The woman forced to strip on the beach in Nice will surely not feel more allegiance to France after this humiliating episode. But the government won’t care. Because, you know, how a woman looks is all that matters.