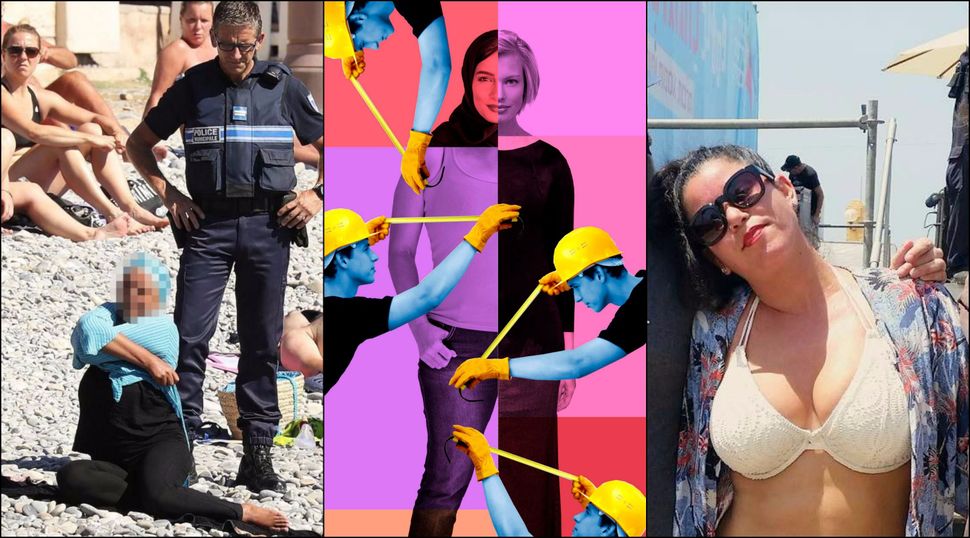 Hot on the heels of France’s burkini ban mania, Israel seems to be coming up with its own version.

An Israeli singer claims that her set at a Culture Ministry festival on Friday was cut short when she was asked to cover up. Hanna Goor, who was wearing shorts and a bikini top, says she was asked to “get dressed” mid-show. When she refused, she was taken off stage. Goor told local media, “It wasn’t a provocation but simply a matter of comfort. It’s summer, it’s hot, and we were at the beach.”

The Ministry insists the set was not cut short, but it did release the following statement: “The festival is aimed at the general public and funded by public money. Goor’s performance does not respect the general public… and so removing her from the stage became necessary.”

To avoid such sartorial “mishaps” in future, the ministry also said it would release guidelines: “A proper directive to all production bodies working through the Culture Ministry will be issued to ensure that this policy is implemented in all events.”

On the surface, this may look like the exact opposite of France’s moves to make Muslim women strip off at the shore. As the liberal daily Haaretz said in an editorial, “The modesty regime that the Culture Ministry is trying to enforce on events meant for the general public is the mirror image of France’s unconstitutional burkini law.” In other words, while the French are shouting, “We are a liberal democracy, take off your clothes!” in Israel the cry is, “We are a liberal democracy, put on your clothes!”

But these are two sides of the same coin. In both cases women are pawns in a war between two extremes of liberalism and conservatism, their bodies signifiers of cultural and religious norms.

This is only the latest example of the clash between a conservative, religious Jewish culture and a secular one in Israel. This tension is visible on the country’s streets. Take a stroll in the seaside town of Tel Aviv, and you will see women in bikinis sitting alongside modestly dressed Jews and Muslims. Visit the religious neighborhoods of nearby Bnei Brak, however, and the streets will be filled overwhelmingly with covered-up women.

Just as with the burkini ban, it is women who are the visible signs of this battle. A debate on the “exclusion of women” in public space, as Israelis refer to it, with modesty a key element, has been ongoing in the country for years, from women not singing at IDF ceremonies for fear of offending the sensibilities of religious recruits, to schoolgirls being told not wear shorts to school in summer, while their male peers can wear what they like.

This latest incident shows, once again, that it is women who bear the brunt of such cultural clashes, where one side fears losing ground. The men wearing shorts on that stage were not asked to cover their knees. A shirtless man would not have been asked to put on a shirt. The French are not asking devout Muslim men to shave off their beards. It is women who are being asked to dress or undress to soothe the nation.

Women and their bodies are treated as if they are national property, to be policed. But by telling women what to wear, official Israel, which touts itself as “the Middle East’s only functioning democracy,” shows just how illiberal it is.

Whether you are removing the clothes off a woman’s back to protect liberal values, or making her cover herself to defend the sensibilities of a devout public, in the end it is exactly the same thing. Both are extreme, state-sanctioned steps that put women in the firing line. The end result of such extremist moves, whichever side of the coin they are on, is an increasingly intolerant society.

Alona Ferber is a writer and editor currently based in London, after working as a journalist in Israel. Follow her on Twitter, @paperdispatch