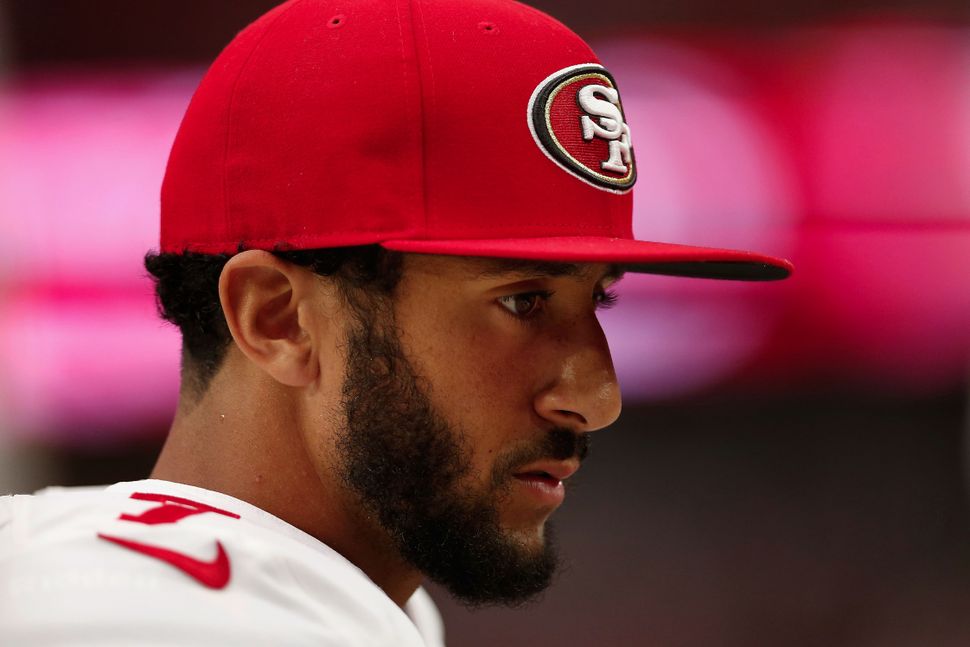 San Francisco 49er Colin Kaepernick made waves this week by declining to stand during the national anthem at a pre-season game. Kaepernick, who has sat out the national anthem during at least one previous pre-season game, has faced backlash from those who see the refusal to stand as unpatriotic, disrespectful, and worse — specifically, that it is a direct affront to those who served in the armed forces.

Kaepernick has explained his decision not to stand during the anthem, stating that he is “not going to show pride in a flag for a country that oppresses black people and people of color. To me,” he added, “this is bigger than football and it would be selfish on my part to look the other way. There are bodies in the street and people getting paid leave and getting away with murder.”

Pundits, many in the public, and even fellow NFL players are blasting Kaepernick for his perceived impudence, and he may even face removal from his team.

I have often heard argument made by Jewish people that the United States has to be respected and revered at all costs — that because we arguably have had it better here than anywhere else in the world, that because the constitution protected to continues to protect our right to exist and to practice as Jews, we owe a massive debt of gratitude that should win the United States unerring loyalty on our part.

While I am certainly grateful to the United States for allowing me to live and practice as a Jew, and for creating an environment in which I am unlikely to come to harm for being a Jew, it is precisely because of that gratitude that I wholeheartedly support Kaepernick’s sit out, as I support all criticism of the United States when it is not offering the same protections granted to me to all of its citizens.

As an athlete with a public presence, Kaepernick’s actions have the power to communicate significantly and symbolically, and he chose to use that power to express concern, to express outrage, about the problem of systemic racism and police brutality currently ongoing in the United States — a problem that affects him directly as a black man.

He joins a long list of athletes in using the platform offered him by his sport to make these symbolic communications. John Carlos and Tommie Smith threw up black power salutes during the 1968 Olympic games. In 2004, Carlos Delgado of the Blue Jays refused to sing “God Bless America” in opposition to the Iraq War. Kaepernick also joins a number of athletes in the NBA and NFL who specifically used their platforms to address the current issue of police brutality against black and brown people: the St. Louis Rams putting their hands up in solidarity with the Ferguson protestors; Lebron James wearing an “I Can’t Breathe” T-shirt in acknowledgement of the last words of Eric Garner.

These protests are representative of the urgency of the police brutality epidemic, as experienced by people of color. Specifically, Kaepernick’s form of protest — refusing to blindly celebrate this country in its current state, despite the desperate problem that is physically is killing American citizens with impudence — should be seen not as an affront to the concept of liberty and freedom, but rather as a call to task.

American troops, in fighting for America, the freedom of its citizens, and the institutional liberty ostensibly at the heart of the American project as a whole, are fighting the same fight as a citizen who wants to address and rectify the problems that corrupt those ideals.

As a Jewish person who has been granted the ability to exist as a Jew by the United States, it behooves me to support rather than shame people who are simply asking for that same right — people who have been promised that right, who fight and die for that right as soldiers, and who are still denied it on a systemic level. True patriotism means demanding that America live up to its promises — not blindly acquiescing in spite of its failures, especially if those failures are so directly dangerous to the lives and wellbeing of American citizens.

Especially when it comes to an institution like the NFL, where players can retain fans despite domestic abuse and violent crimes, the vehement reaction against Kaepernick’s symbolic dissent speaks more to the reluctance of the general public to address national problems, to recognize that people are being hurt and killed and are angry, and to actually struggle for change — for the betterment of America. While it is harder to struggle through hard issues and to actually address ugly truths, there’s nothing more American than the freedom to do so. If we really want to make good on our debt to America as Jews, we will support that process.