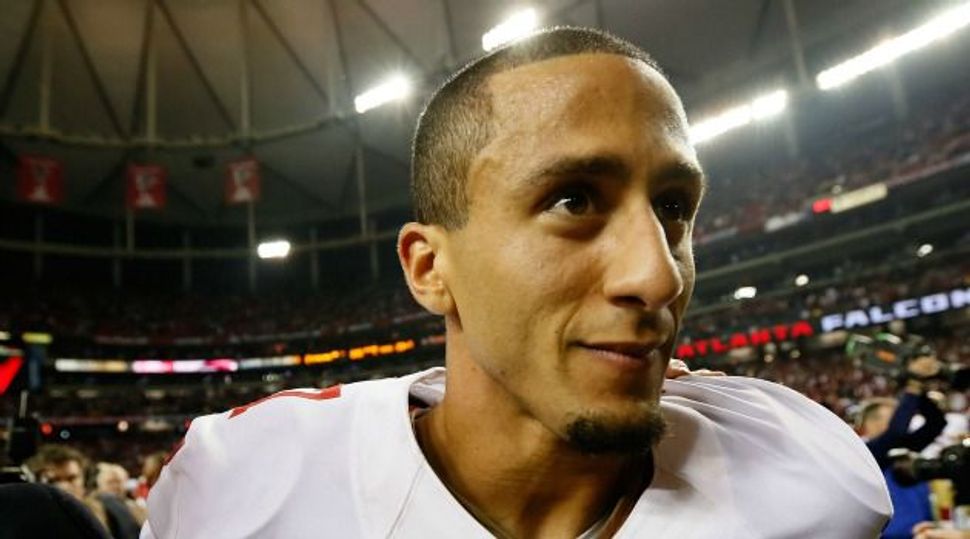 God?s Team: San Francisco phenom Colin Kaepernick will lead his team into action against the Baltimore Ravens in the Super Bowl. Who will God be rooting for? Image by getty images

One is a superstar professional football player in a nation that considers the gridiron to be holy ground. The other is an Arab Israeli with a permanent seat on his nation’s highest and most revered court of law. Despite their minority status, the athlete born of a single white mother and an African American father and the justice born in Haifa before there was a modern state of Israel occupy places of privilege in their respective societies.

But one sat. The other stood silent. And they both ignited an important public conversation about national respect and the right to protest.

As Americans continue to debate the decision by Colin Kaepernick, the San Francisco 49ers quarterback, to sit while our national anthem was played, I couldn’t help but compare his act of protest to the dispute four years ago when Salim Joubran, the first and only Arab Israeli permanently on the Supreme Court, was caught in a video broadcast quietly refusing to sing the words of “Hatikvah,” the Israeli national anthem.

The words of scorn and praise heaped on both these men are an indication of how national anthems — just songs, really — conjure up deep and complicated emotions about patriotism and loyalty. That’s a good thing. At a time when precious little binds together Americans, and when Israel’s social fabric is fraying, the fact that we can argue over these ritual behaviors is healthy, as long as it is done with civil respect.

Even if their actions made many uncomfortable, both men took these very public stances not for themselves, but for others, to illuminate what is missing in the nationalistic ideals that we celebrate when singing “The Star Spangled Banner” and “Hatikvah.” Kaepernick used the attention to spotlight the systemic issues of police brutality against unarmed black women and men. “I am not going to stand up to show pride in a flag for a country that oppresses black people and people of color,” he told NFL media in an interview.

Joubran has let his silence speak. But it’s easy to understand why an Israeli anthem which refers to nefesh yehudi, the Jewish soul, would not be embraced by the 20% of Israelis who are not Jewish and who don’t regard this modern state as the culmination of a two-thousand-year yearning to return to the land.

This is where the stories of these two men diverge. With the sweep of a pen, at least the song “Hatikvah” can be made more inclusive. Kaepernick’s protest complaint is far more difficult to resolve within the bars of our current anthem.

In a sense, the football player is throwing out two challenges. His broader complaint about the treatment of Americans of color resonates in a season of growing debate over systemic racism in our criminal justice system, but it is hard to predict what the end game will look like or when it will arrive. We can and should make his concerns everyone’s concerns, but if we take his protest to its logical conclusion, how will we know when we’ve achieved enough to stand again?

Perhaps unwittingly, Kaepernick has also given new life to the periodic plea to replace “The Star Spangled Banner” with a more appropriate national anthem. For years, journalists, activists, even a U.S. Senator, have argued that the song with a melody lifted from an old English drinking tune is difficult to sing, poorly written, overly militaristic and comes from a questionable, indeed controversial, source. After all, when Francis Scott Key penned the “The Star Spangled Banner” in 1814, he owned slaves himself and was fervently against abolition.

Not to mention the odd fact that the song does not even include the name of the country it supposedly salutes.

I’m not the only one to call for it to be replaced with the lovely, more accessible and sweet “America the Beautiful” — with lyrics written by a woman college professor — or even “God Bless America”, brought to us by a Russian Jewish immigrant, Irving Berlin. The important thing here is that it is possible. Our current anthem was not officially adopted until 1931, 144 years after the U.S. Constitution was signed. We were a nation without an anthem for far longer than one with it.

To satisfy the quiet complaint of Salim Joubran, “Hatikvah” doesn’t have to be replaced. By ever so slightly altering a few words, the stirring Israeli anthem can boldly embrace all its citizens, regardless of blood or faith.

The Forward made this argument four years ago, after the Joubran video emerged, and it is just as sound today. Our language columnist at the time (who wrote under the pen name Philologos) proposed a solution, a careful adjustment of a few problematic words and phrases. In the opening stanza, nefesh yehudi becomes nefesh yisra’eli, the soul of a Jew becoming the soul of an Israeli. And the eye that “looks for Zion” (le-tsiyon) can be altered to yearn “for our country” (l’artseynu.)

Then in the closing stanza, he suggested a skillful blend of the current language with the words of the original poem from which the national anthem was taken: Od lo avda tikvateynu, / ha-tikvah ha-noshana, / lihiyot am hofshi b’eretz avoteynu, / b’ir ba david, David hana. That is, “We have still not lost our hope, / our ancient hope, / to be a free people in the land of our fathers, / in the city in which David, in which David encamped.”

When we asked the brilliant musician Neshama Carlebach to perform both versions, old and new, the power and magnitude of this change sprung to life.

It may take more than a lifetime, many generations, to fully cleanse America of the stain of slavery and the pain of racism. But it is surely possible to amend the symbols and rituals that today stand in the way of progress and go to the heart of our shared identity. In that same vein, Israel can choose to replace a few exclusionary words and phrases with language that reflects a broader and more inclusion national aspiration.

National anthems are sensitive texts because we venerate them so. Let us thank Colin Kaepernick and Salim Joubran for reminding us of the continuing challenge to keep them worthy of veneration.