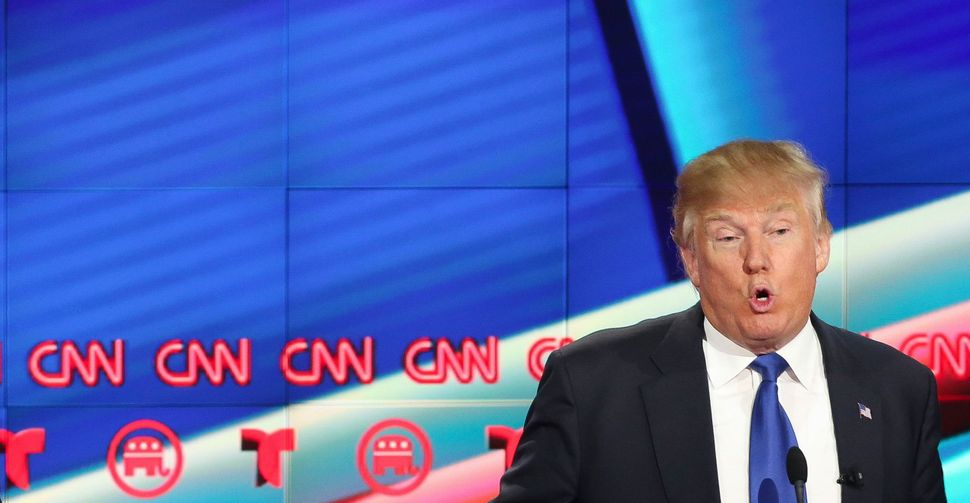 Another day, another anti-Semitic trope in defense of Donald Trump. The latest defense is surprising, though, coming as it does from Caroline Glick in the Jerusalem Post. Glick writes that Republican Jews are committing “collective political suicide” by not supporting Trump — and that they’re taking the Republican Party, if not the entirety of American Jewry, down with them.

Like any number of Pepe-the-Frog-avatar Twitter accounts, Glick is happy to blame Jews, a miniscule fraction of Republican Party voters, for a possible Trump loss. She glosses over what is happening to Republican Jews on the right. She writes that Republican Jewish attitudes toward Trump will adversely impact how the Party as a whole treats Jews. It sounds like a command to get in line, and fast.

Glick brings up an Intelligence Squared U.S. debate held in Manhattan last week. The subject was “Blame the elites for the Trump phenomenon.” All four debaters were conservatives who are, within a range, anti-Trump. Washington Examiner’s Tim Carney and The Federalist’s Ben Domenech were on the side blaming the elites for Trump’s rise. Washington Post’s Jennifer Rubin and Wall Street Journal’s Bret Stephens opposed that view, mostly arguing that the voters share some of the blame.

I was at that debate. I walked in siding with Rubin and Stephens. But Carney and Domenech presented the stronger argument and, in the end, I voted for their side.

When it comes to Trump, there’s a lot of blame to go around. The media, elites, voters, all of us are responsible for this sideshow being the nominee and possible president of the United States.

Glick describes the debate as between Jews (Rubin and Stephens) and Christians (Carney and Domenech). She quotes Rubin as saying that Jews don’t believe everyone is redeemable as some knock on Rubin’s Judaism, because Rubin seems not to believe that Trump can change. Painting it as a contest between Jews and Christians, Glick writes that the Christians won in a knockout victory.

At one point in the debate, Carney called Trump’s Twitter brigade “some of the worst people in the world” and said to Rubin, “I deal with these people on Twitter as badly as you do, Jen.” I just doubt that. The mob does target Republicans who are anti-Trump pretty hard, but it’s Jewish Republicans who get their faces superimposed on pictures of Auschwitz ovens. It’s just not the same.

“Objectively,” Glick writes, “their [Jewish Republicans’] behavior is irrational. With the radical takeover of the Democratic Party, these Republican rebels cannot hope to receive influential roles in a Clinton administration even if she throws some table scraps in their direction. And by attacking Trump and his voters, they are dooming themselves to political homelessness for at least a generation.”

Despite criticizing Rubin’s Judaism, Glick seems unaware of the many historical examples of Jews standing up for what is right, even at personal cost. She’s also under the impression that “Trump has disavowed the support of the GOP’s Jew-hating wing” — something that has certainly not happened.

It simply doesn’t make sense for a Jewish Republican to support Trump. His proposed policies do not align with our collective interests, whether as Jews or as Republicans.

The problem with criticizing Trump’s positions, of course, is that his beliefs are so tenuous and superficial that they may have changed by the time an article criticizing them is published. To be an American Jew supporting Trump, I would have to pretend that he didn’t say he would be “neutral” on Israel or that he will force Israel to make a tough deal. I would have to block out the fact that he questioned Israel’s commitment to peace when he spoke to the Republican Jewish Coalition Presidential Forum in Washington last December. That was only 9 months ago, but in Trump years that’s a decade. I know, he didn’t mean what he said, he never does. But I can’t unhear it.

To support him also means that I have to believe that his online army of anti-Semitic supporters is just some coincidence, unrelated to any of his views or potential future policies.

And that’s just from the Jewish perspective.

As a Republican, in order to support Trump I have to gloss over the fact that he said, during one of the GOP debates, that Obamacare didn’t go far enough and that we should have the medical system of Canada or Scotland. I have to pretend that he didn’t take the exact same unconstitutional view as Hillary Clinton on banning people on the “terror watchlist” from owning a gun. We have to assume all the gibberish he says off-the-cuff — and then walks back when an advisor gets in his ear — isn’t what he really believes. It’s crazy to think that women who get abortions should be punished, yet the fact that I took the presidential candidate at face value when he said it somehow makes me the crazy one. Obviously he didn’t mean that. Who could?

This is all before we get into the personality stuff. I find Trump to be a blowhard, unintelligent, incurious and with a lack of discipline so severe that when he hasn’t tweeted insults in 24 hours he receives widespread applause.

What about Clinton, everyone asks? Isn’t she worse in so many ways? Just like I can’t pretend that Trump hasn’t said and done things I consider vile, so too I can’t turn a blind eye to all the despicable things Clinton has done in her long public career. For me as a Jewish Republican, Clinton isn’t an option.

That I would have little in common with the Democrat running for the presidency makes sense. That I am therefore being relentlessly pushed to support the Republican with whom I have so little in common does not.

Karol Markowicz is a writer in Brooklyn. She formerly consulted for a public relations firm that had the Intelligence Squared U.S. debate series as a client. Follow her on Twitter, @karol