The Skittles Uproar Is a Silly Diversion From What Donald Trump Jr. Seriously Believes 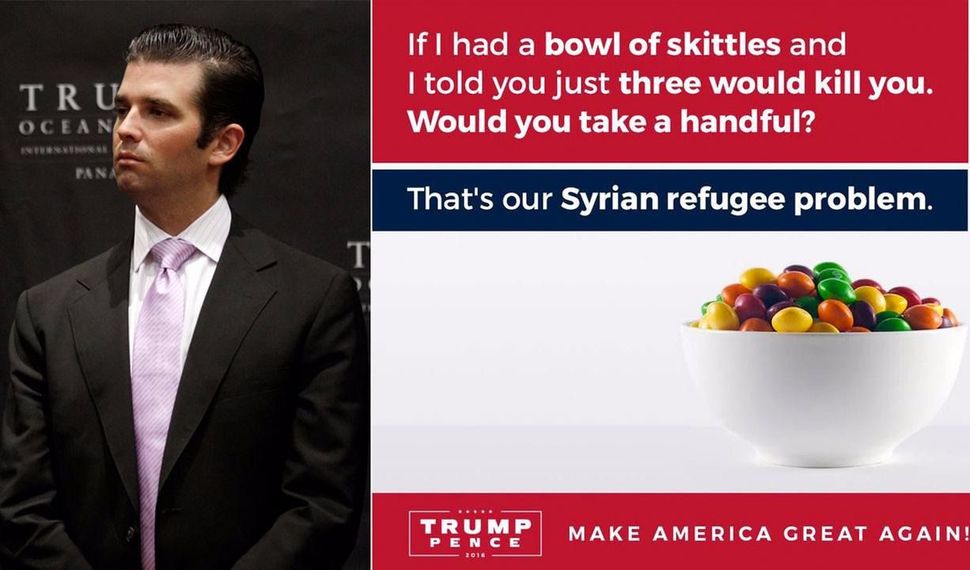 Donald Trump’s family is like a box of chocolates: You never know what you’re going to get, but — with apologies to Forrest Gump — you could be in for an unpleasant surprise. The outside looks awesome, but what you find below the surface might make you sick. Especially if, like me, you’re allergic to nuts.

I’m treading on thin ice here, I know. Some folks are offended if you compare a human being to a bonbon. The Trumps won’t mind, though. Recently, the presidential candidate’s No. 1 son, Donald Trump Jr., compared Syrian refugees to Skittles, those colorful gummy pellets. To bolster his father’s case for halting Muslim immigration, he tweeted this message: “If I had a bowl of skittles and I told you just three would kill you, would you take a handful? That’s our Syrian refugee problem.”

Junior’s tweet stirred a firestorm. The spokeswoman for the United Nations High Commissioner for Refugees emailed that Syrian refugees “are fellow human beings” fleeing war. “Depictions like these are dehumanizing, demeaning and dangerous.” Countless people retweeted an article claiming that Junior’s message is rooted in a 1938 German children’s story, “The Poisonous Mushroom,” in which a mother teaches her son, “Just as a single poisonous mushroom can kill a whole family, so a solitary Jew can destroy a whole village, a whole city, even an entire Volk.” It’s from a storybook published by Nazi propagandist Julius Streicher, executed for war crimes at Nuremberg in 1946.

But no anti-Junior protest was more widely retweeted than this statement from Wrigley USA, which produces Skittles: “Skittles are candy. Refugees are people. We don’t feel it’s an appropriate analogy.”

It’s worth noting that likening humans to candy wasn’t always considered offensive. In fact, referencing a confection universally signals affection. Consider the countless love songs with names like the Archies’ 1969 hit “Sugar, Sugar” (“You are my candy girl”), or the 1958 classic “Lollipop,” by the Chordettes.

Wrigley got that part wrong. Comparing humans to candy is fine. For many of Junior’s critics, it’s the comparison to poisoned candy that offends.

What really bothered the critics, though few said so, was the belittling of Syrian refugees’ unspeakable suffering implied in Junior’s comparing that wave of human misery to a bowl of yummy gummy balls. But that was Junior’s intention — to minimize our perception of the suffering in order to justify Dad’s policy of exclusion. The candy uproar is actually just a diversion, an oblique attack on Junior for what he seriously believes.

In fact, the entire refugee issue is a diversion from the terrorism problem. Note that Junior wasn’t comparing all refugees to poison — only the terrorists among them. But the fact is that all the refugee and immigrant vetting in the world couldn’t have stopped the jihadist terror attacks of the past quarter-century, because almost none of them were perpetrated by immigrants. Nearly all the most notorious attackers were homegrown Americans, born and raised here, educated in our schools and integrated into our society. Most others came as children.

Moreover, nearly all the attackers at Charlie Hebdo and Hyper Cacher market in Paris in January 2015, the horrific Paris massacre last November, the Brussels Jewish Museum shooing in 2014 and the Toulouse yeshiva shooting in 2012 were born and raised in France and Belgium.

The main exceptions to the rule are the perpetrators of the attacks of September 11, 2001, and the first World Trade Center bombing, in 1993. Those were elaborate plots carried out by conspirators who slipped into the country, evading safeguards by deception. If the safeguards had been stricter, they would likely have found a way around them, too.

We’re misled by our perceptions in large part because the biggest exception, the 9/11 attacks, so vastly overshadows the others that all the rest seem like echoes of the big one.

The same misperception leads us to inflate the frequency of attacks in our minds. In the 23 years since the 1993 World Trade Center bombing there have been about 40 serious efforts to carry out terrorism in the United States (here is an incomplete list), but only about one-third were translated into action of any sort. The rest were foiled in advance by law enforcement.

Leaving aside the 9/11 attacks (if that’s possible), some 90 people have been killed in Islamist or Palestinian nationalist terror attacks in America since 1993. Close to 300,000 people were killed in those years by domestic gunfire, excluding suicides.

We must acknowledge that terror attacks have an impact different from that of murders and even school or mall shootings. Terrorism is a deliberate attempt to terrify us in order to weaken national resolve and advance a hostile political goal. For all the grotesque statistical imbalance between the two, homicide is ultimately an attack by one individual on another. Terrorism is an attack on the nation.

Still, the question remains: If fighting jihadi terrorism isn’t a function of immigration and refugee policy, what is it?

The answer isn’t a pleasant one. What jihadi terrorists have in common is their attraction to a perverse, violent mutation of Islam. Looking around the world, it appears that something in contemporary Islam leads a tiny percentage of Muslims to the apocalyptic-nihilist teachings of jihadi Islamic fundamentalism.

Estimates are that there are about 80,000 active jihadis in the world, counting all the members of the Islamic State group, Al Qaeda and the offshoots, the Taliban, Boko Haram, Hamas, Hezbollah, the Philippine Moros and similar groups. That’s about 0.00005%, or five 100,000ths of the world’s 1.5 billion Muslims.

For comparison, the same percentage of America’s 82.5 million evangelical and fundamentalist Protestants would come to about 4,100. That’s about one-sixth the size of America’s most prominent radical Christian white supremacist group, Christian Identity, with its estimated 25,000 adherents.

Seen differently, a similar proportion of the world’s Jews would total about 750, roughly double the number of violent messianist extremists within the West Bank Israeli settler population.

The bottom line: It’s not about Islam. It’s about religious fundamentalism. There’s something in the air these days, and it sure isn’t sweet.

The Skittles Uproar Is a Silly Diversion From What Donald Trump Jr. Seriously Believes