From Rosh Hashanah to Election Day, It’s a Season of Repentance Like No Other 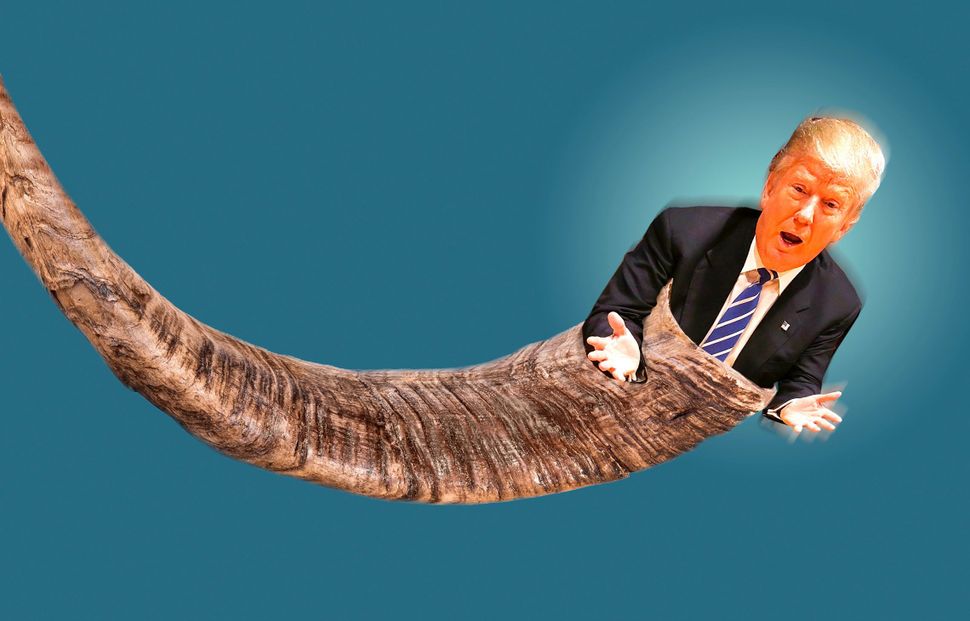 ‘Today the world is born” — Hayom harat olam. These are among the most electric words in all of Jewish sacred liturgy. They’re recited by the congregation immediately after the blowing of the shofar, the ram’s horn, at midday on the New Year holiday, Rosh Hashanah.

The words are especially electric this year, because they bring home the fraught reality of the crossroads we’ve come to. Most of us, I suppose, take the image of Rosh Hashanah as “birthday of the world” to be a sort of metaphor. It sums up the spirit of reset and renewal that marks this season of repentance. It’s not literally the anniversary of the Big Bang. This year, though, the words take on a frighteningly literal meaning. We may not know exactly how or when the world was born. But we’re beginning to get a pretty good idea of when and how it can die.

All these things were expected to start happening after 2050, but they’re here now. The changes are coming sooner and more severely than even the pessimists predicted. Just three years ago scientists were warning of sea levels rising up to three feet higher by 2100. Now they’re expecting a rise of 6 to 12 feet, dooming most of the world’s coastal cities. The Pentagon expects new wars as populations migrate northward, fleeing drought, crop failure and desertification. But that too is already underway.

The planet can still be kept reasonably habitable, but it will require sweeping changes, mostly in energy use, starting very soon. The 195-nation climate accord reached in Paris last December maps out the first steps. They’re inadequate to avert disaster, but they’re a start.

All this is scientific consensus, and it’s finally becoming worldwide political and diplomatic consensus. There’s only one serious political force in the world that rejects the science and refuses. Unfortunately, it’s a political party that controls the legislative purse strings in the world’s wealthiest, most powerful industrial nation.

And it’s become apparent that we might be on the verge of electing a chief executive who will make the Neanderthals in his party’s congressional wing look like the Harvard Faculty Club. Scientific American reports that Donald Trump has picked one of America’s leading climate skeptics, Myron Ebell of the Competitive Enterprise Institute, to head up his transition team at the Environmental Protection Agency.

Rosh Hashanah, which begins on the evening of October 2, is a day for reflection and introspection, for looking around and within ourselves and taking an accounting. Yom Kippur, which comes 10 days later, is the day we sum up our accounting, take a deep look at our community and society and raise our voices in a plea to avert the evil decree that might be coming as a consequence of our actions.

Election Day comes four weeks after that. Not in living memory has an election been so consequential. The sequence — Rosh Hashanah, Yom Kippur, Election Day — is a frequent source of wry jokes and overwrought sermons. This year it’s no joke.

Rosh Hashanah is one of the very few moments in the year (Yom Kippur is the other) when most of the world’s Jews will come and stand and sing together with one heart. We’ll meditate on the wrongs we’ve done over the past year, individually and communally, and the ways in which we must change in the coming year. The climax will come in the middle of the day with a series of piercing blasts from a ram’s horn. It’s an ancient, urgent call to arms. Listen up, it says, this is important.

And this will be our response: “Today the world is born. Today all the creatures of the world face judgment, whether as children or as servants. If as children, have mercy on us as a parent has mercy on his own children. And if as slaves, our eyes are lifted to you until you show us grace and lighten our judgment, O awesome holy one.”

In plain language, our actions today determine our fate tomorrow, along with the fates of the earth and all its creatures who stand alongside us in spirit. Our readings for the rest of the day, indeed for the Ten Days of Awe, consist largely of steps on the road to repentance: acknowledgment that we must do better, prayers for the strength and wisdom to do what’s right and hope that our fate proves to be better than we fear we might deserve.

Here, then, is the central message with which Jews of every stripe bring in each new year: This day, the day of our old accountings and new beginnings, is the day the world’s fate is decided. We are all accountable as one body, all of humankind, indeed all the world’s creatures. In the final accounting our separate clans, tribes and nations don’t matter.

In large part our future depends on events beyond our control, originating in the vast, unknowable, infinite space that we can never fully understand. In the end, though, our fate is ours to decide. We are the creatures of the earth. All of us in our synagogues, churches and mosques, in our gleaming towers and squalid hovels, in our nests in the disappearing forests and our lairs beneath the warming, rising seas.

On this day each year we stand together in judgment and face the consequences for the actions we took during all our yesterdays.

From Rosh Hashanah to Election Day, It’s a Season of Repentance Like No Other