We Knew Gender Would Be An Issue In This Election. But Did It Have To Play Out Like This? 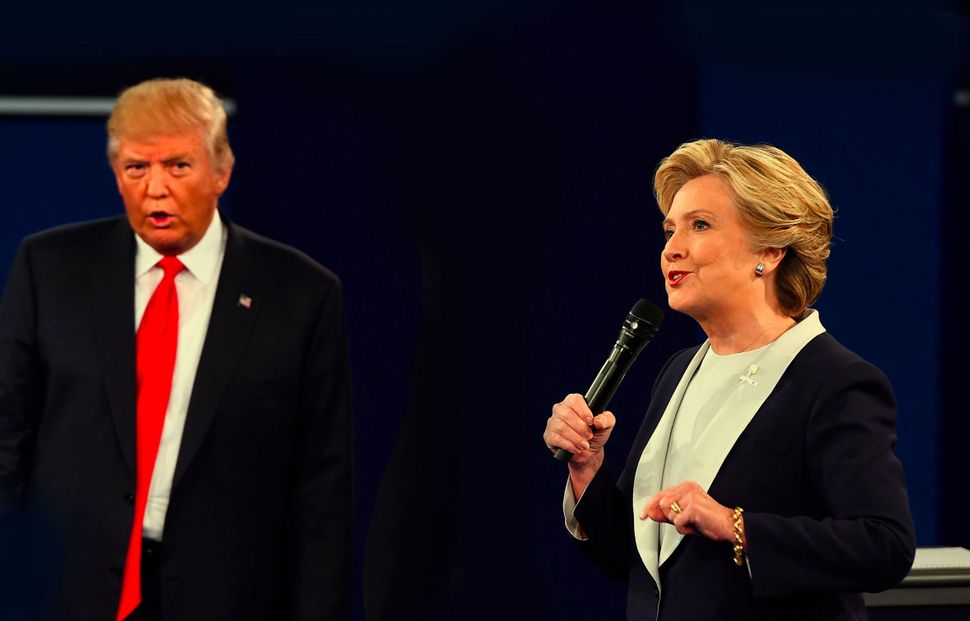 Ever since it became clear that Hillary Clinton would be the Democratic nominee for president, it was inevitable that gender would be the backdrop to this election campaign, the thrumming undercurrent, shaped by the thrill many felt in seeing a woman finally break through — and the unease with which others greeted the possibility of a woman in the Oval Office.

But did we ever imagine it would be like this?

There was Clinton on October 9, sharing the stage in the second presidential debate with a man who just days before was heard joking on tape that he forced himself on women, kissed them without permission and described their bodies in vulgar terms, and who was allowed to justify all this as mere “locker room talk.”

She was confronted with her husband’s alleged infidelities as if they were a stain on her character — or, as the great Nicholas Kristof tweeted, “a serial adulterer who brags about his sexual assaults is needling a woman because her husband cheated on her.”

Her opponent interrupted her repeatedly, uttered lie after bald-faced lie, stalked around the stage, stated outright that she had “tremendous hate” in her heart, called her a “devil” — and threatened to throw her in jail if he were elected president.

Just our luck: A woman finally achieves this milestone in gender equality, and she gets to run against a bullying misogynist like Donald Trump. Surely, you say, the atmosphere would not have been as toxic, and the language not as guttered, if one of Trump’s more reasonable Republican primary opponents had prevailed.

Well, I’m not sure. That may have only allowed a comforting veneer to obscure the ugliness beneath. Another way to look at Trump’s extremism is that it is lancing a boil, bringing to the surface all the nastiness and disrespect that has been directed toward Clinton in particular, and women in general, in our politics and government policies, largely driven by the Republican Party.

I would never, ever thank Trump for unleashing this ugliness, for bringing our public discourse so low. But there is no hiding it now. We’re on the brink of great change, and in the fear-driven backlash, what women have had to contend with — even in our sophisticated culture — is there for all to see.

It complicates matters that Clinton, a flawed woman, is the one who is provoking this rupture. While Trump’s stunt to bring to the debate women who claim to have been sexually abused by Bill Clinton was outrageous, he was channeling an ambivalence that has long dogged Hillary Clinton. She is certainly not the first aggrieved politician’s wife to forcefully defend her husband when he was accused of misdeeds. (Somehow, husbands are rarely put in the analogous position.)

Trump accuses her of much more, though, including overstepping her role to denigrate women who stood in the way of her husband’s success. Even if that were true, it is astonishing that he, of all people, would see that as disqualifying, since he has denigrated anyone who has stood in his way, regardless of gender.

Instead, the GOP nominee is allowing the public to see the inevitable result of what happens when women are reduced to sexualized objects, when their worth is measured only in relation to the men in their lives. Trump is simply expressing a grosser version of what so many of the suddenly shocked Republicans said after the vulgar tape was released. “Women are to be championed and revered,” House Speaker Paul Ryan declared in just one example.

Actually, I’d just like us women to be granted autonomy over our bodies, to be paid equally to men, and to be supported in our choices to raise our children while working hard at whatever job we want.

As Rebecca Traister asked in a damning piece in New York magazine: “Which is worse: Threatening to grab someone by the pussy or forcing someone to carry and give birth to a baby that is the result of rape? Which is worse: Popping a Tic Tac in preparation for forced extramarital kissing with a stranger or actively discouraging women’s full participation in the workforce? The answer is: None of these is worse; they are all of a kind. The view of women as yours to control via political power, star power, or simply patriarchal power, is what Republicans — not just Trump, but lots of Republicans — have been doing for years….”

The stark image during the last debate — of a scowling Trump prowling the stage while Clinton approached the citizens asking questions and answered them by name — encapsulated the gender polarities of this entire election.

It may not have been what we expected. It certainly wasn’t what we wanted. But now that we know the ugly side of modern America’s gender divide, what will we do to expunge it?

We Knew Gender Would Be An Issue In This Election. But Did It Have To Play Out Like This?