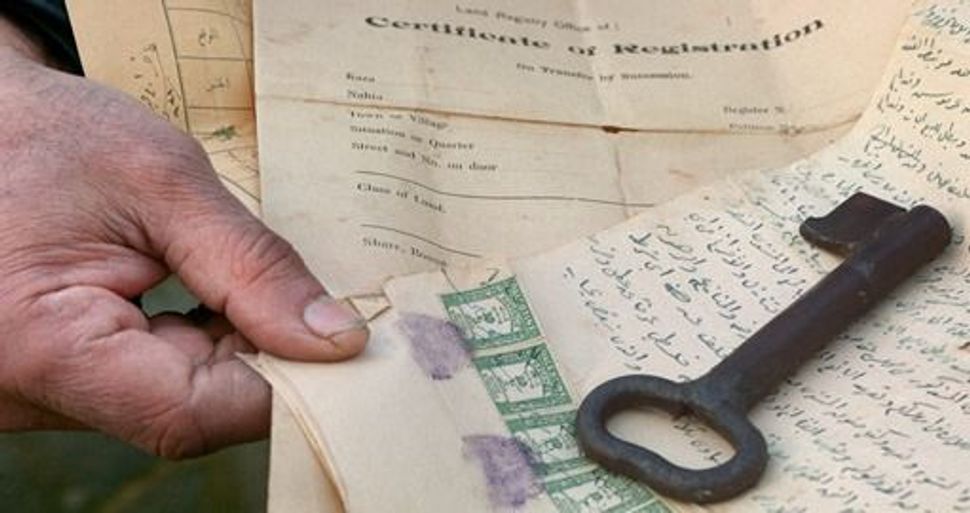 We watched with admiration as Hagai El-Ad of B’Tselem and Lara Friedman of Americans for Peace Now appeared recently before the U.N. Security Council to urge action against the Israeli occupation. The session was framed as a discussion of settlements in the context of “peace” and a “two-state solution.” But behind the occupation lurks an even more vexing issue: that of the “right of return” for Palestinian refugees. We feel we need to unpack this issue — and the assumptions about demographics that animate it — if we’re going to make real headway on countering the occupation.

The vast majority of Israelis, even most on the Israeli left, argue that admitting the Palestinian refugees would lead Israel to lose its “Jewish character.” For them, a Jewish-majority state provides the Jewish people with a degree of security and justice. Yet many Palestinians and their increasingly numerous and vocal supporters in North America and Europe see no justice in Israel’s exclusionary policies allowing all Jews, but no Palestinians, to “return” to the country.

Israelis’ anxious focus on ethnic demographics inflicts harm on those within the state as well. An array of discriminatory laws and practices currently marginalize the 20% of Israeli citizens who are Palestinian. These laws and practices not only make it difficult for Palestinian citizens to embrace the state as their own, they also preclude justice, equality and peace.

But if Palestinian refugees return home, the demographic balance changes, and all discriminatory laws are lifted, can Israeli Jewish identity continue to flourish?

Historically, the existence of robust Jewish life in Arab-Muslim settings was the rule rather than the exception. This is not to say there was no discrimination or instances of violence, but Jews were very much part of the social, cultural and economic fabric of the Middle East and North Africa well before the emergence of Zionism. Some cities, such as Baghdad, were profoundly shaped by their large and influential Jewish minorities. By the dawn of the colonial era in North Africa, meanwhile, some Jewish merchants in the city of Oran (in what is now Algeria) were so powerful that the French relied on them to negotiate with North African or European rivals, supply cities with goods and raise money to feed their troops. In some cases, wealthy North African Jews even donated property to French institutions ostensibly intended to “civilize” them.

Of course, Zionism had specific goals that go beyond coexistence, such as reviving the Hebrew language, fostering new modes of spirituality, and developing a modern Jewish cultural tradition for a post-Enlightenment world. But there is no reason to think these accomplishments are dependent on a system that rigidly enforces a demographic majority.

Consider a post-peace Israel where refugee claims have been settled, where the everyday brutality of occupation no longer precludes normalcy, and where the work of truth and reconciliation has begun. While still remaining alert to outside threats, Israel would be able to relax its disproportionate focus on security. After all, war and occupation take a toll on creative expression, while massive defense spending diverts focus from cultural investment.

Such an Israel could enable different cultural expressions not only to coexist, but also to inter-twine in creative ways. Israel already boasts artists whose offerings depend on challenging the ethnic divide. Mizrahi singer Sarit Hadad and the Palestinian-Israeli rap group DAM perform in both Arabic and Hebrew. Celebrated Israeli writer Sayed Kashua, who is Palestinian, writes novels in Hebrew. His television offerings, which play on themes of dual identity, use both languages. The fact that Kashua has left Israel for Illinois because of Israel’s inhospitable climate for Arabs underlines another benefit of true justice: a reimagined society would help Israel retain its best and brightest. All of these expressions should only be expected to multiply in a post-peace scenario where art is liberated from the chains of mutual suspicion.

A state that does not specifically privilege Jewish demographics might also spell the end of Orthodox Judaism’s stranglehold over personal status matters. Such a state would therefore be more hospitable to Jewish (and non-Jewish) religious pluralism, and could uphold the gender and sexual identity rights already embraced by liberal religious streams. Citizens might finally be permitted to marry under the auspices of the Jewish, Muslim or Christian denomination of their choice, or under none at all.

Already, today’s Israel provides hints of how an inclusive education system might look. The small but growing Hand in Hand network of bilingual schools dotting the country shows how both Hebrew and Arabic, along with their respective (and often shared) cultural inheritances, can be taught, sustained and celebrated in a bicultural framework that boasts a critical mass of each population, but drops coercive measures to sustain the absolute majority-status of one.

An Israel where an unyielding focus on population balance no longer serves as a barrier to negotiations, and where Palestinians and Jews are valued equally, could not only accommodate the diverse cultural and religious expressions of both peoples, but also help them flourish.