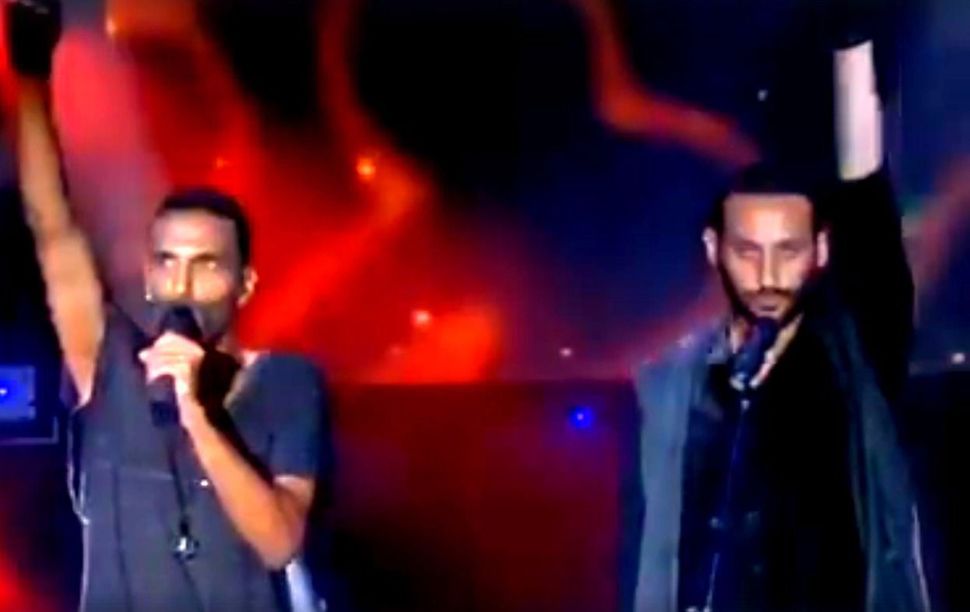 Poetry has become a lightning rod in Israeli politics. In July, Israeli Defense Minister Avigdor Lieberman summoned an Army Radio broadcaster for “clarification” after the station ran a program discussing the work of the late Palestinian poet Mahmoud Darwish. And a few days ago, Minister of Culture and Sport Miri Regev walked out of the Ophir Awards (the “Israeli Oscars”) during the performance of a poem by Darwish set to music.

The performance, in Hebrew and Arabic, by Tamer Nafer and Yossi Tsabari, is from Udi Aloni’s film “Junction 48” (which won for best musical score) and is called “Ana Mish Politi” — a hybrid Arabic-Hebrew phrase that translates as “I’m not political.” The performers rap: “People talk about equality, coexistence and freedom… but they fear the dash that connects Jew and Arab,” before concluding with, “We’ll walk together on two different paths. We’ll walk together, as we are, united and separate.” The song features lines from Darwish’s famous poem “Identity Card.”

It’s hard to underestimate the relevance of Darwish for understanding Palestinian political consciousness. Born in 1941 in the Galilee region, Darwish fled with his family during the fighting of 1948 and his village was destroyed. Returning to what had become Israel after the war, Darwish, like all Palestinian citizens, lived under the sometimes brutal military administration. By the early 1970s, after joining the PLO abroad, Darwish was barred from re-entering Israel, except for short visits.

In a right-wing government like the one Israel has today, including a justice minister who has referred to the Palestinians as “little snakes,” understanding the Palestinian experience has been cast as tantamount to treason. Lieberman compared the Army Radio station’s airing of the broadcast on Darwish to “glorification of the literary marvels of Adolf Hitler’s Mein Kampf.” And Regev accused Arab Israeli audience members who stood in solidarity during the performance of issuing a “Nazi salute.” (More likely, they were doing a black power salute, echoing the single-gloved attire of the performers who concluded their performance with their fists in the air.)

Darwish’s words, it is true, can ring threateningly on ears not accustomed to taking seriously the implications of Palestinian suffering. The poem “Identity Card” reads: “I have a name without a title….My roots were entrenched before the birth of time…before the pines, and the olive trees, and before the grass grew.” The poem concludes: “I do not hate people, nor do I encroach. But if I become hungry, the usurper’s flesh will be my food. Beware, beware of my hunger and my anger!”

While some Israeli Jews see this as inciting, Palestinians see this as a symbol of steadfastness in the face of oppression.

Facing an array of discriminatory laws and practices, Palestinian citizens of Israel — comprising one-fifth of Israel’s population — have reason to experience their particular form of citizenship status in terms of oppression.

Admissions committees at gated communities sprinkled around the country employ “social suitability criteria” — often code for keeping out Arab applicants. Almost no new Arab towns have been built since 1948. Palestinian citizens cannot bring their spouse to live with them in Israel if that spouse is from the West Bank or Gaza — a law that directly targets West Bank and Gaza residents but that indirectly affects the Palestinian minority who are indeed citizens. (Given the lack of civil marriage in Israel, citizens cannot marry across religious lines inside the country anyway.)

Under the 2011 Nakba Law, an institution holding an event commemorating the Palestinian expulsion of 1948 can have its state funding slashed. Evidence of the Palestinian people’s geographic history within what is now Israel has been papered over, and the trauma of living under military administration until 1966 casts a long shadow. Many Israeli Jews, for their part, are comfortable with maintaining more rights than their Palestinian citizens, with 79% saying they deserve “preferential treatment,” but only 21% acknowledging that there is actually much discrimination in Israel.

With international pressure being placed on Israel, the country has to address some tough questions. Will Israel be able to adhere to its core identity as a Jewish state? Will some Palestinian refugees be granted return? And if domestic inequality is righted, will Israel’s Jewish character be eroded?

Even as many Israelis rail against religious coercion, their country’s identity as a Jewish state is dear to most. So is the belief that Israel’s origins were noble, and that if Palestinians suffered it was a result of Arab intransigence. In this light, it’s really not surprising that we’re seeing Israeli legislators attacking the symbols of Palestinian identity. It’s a rear-guard cry for holding onto the status quo while forces for justice are clamoring for change.