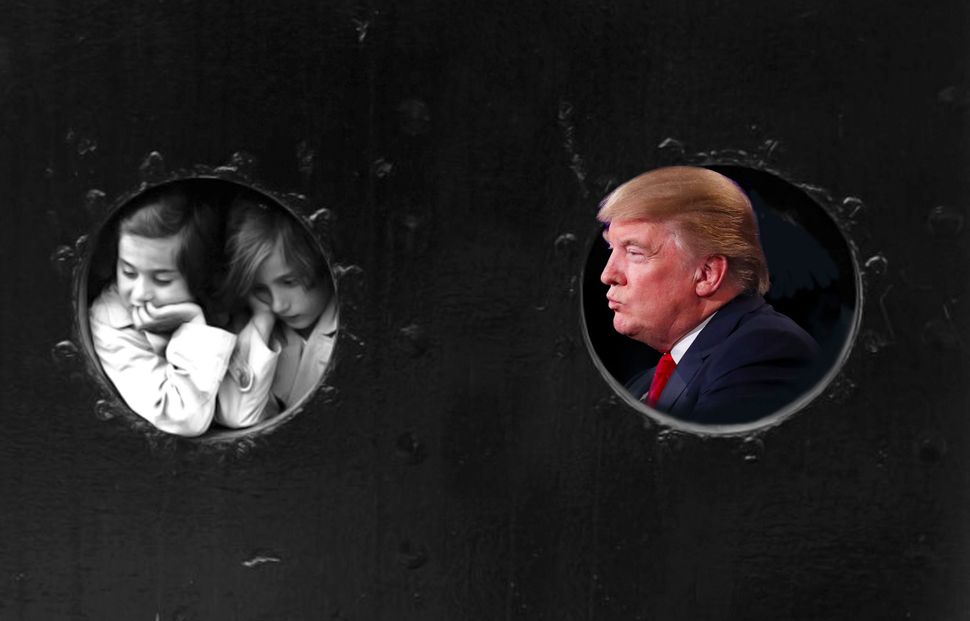 Donald Trump has called Syrian refugees the “greatest Trojan Horse of all time” — a comment he repeated in Wednesday night’s final presidential debate. He insists that immigration has to stop because “we have enough problems in our country.” Does he know that these arguments were also used against Jewish refugees during World War II — refugees like my parents?

Beginning in 1933 and ramping up as German tanks rolled into neighboring lands, European Jews desperately sought entry into America. Yet, while Jews faced increasing persecution and violence, American leaders worried about “fifth columnists,” alleged Nazi agents who might sneak into the United States as refugees.

The anti-Semitic Assistant Secretary of State at the time, Breckinridge Long, fretted in his diary that the Gestapo, the German secret police, sent two trainloads a week out of Germany. He feared this “sinister” arrangement, believing that the German government gave permits only to people they could use as “agents” in the United States. Other bureaucrats did not want to admit refugees whose relatives remained trapped in Germany or Nazi-occupied lands. These newcomers, it was thought, might undermine the U.S., because the Nazis could use their relatives as hostages. President Roosevelt said as much in his Fireside Chat of May 26, 1940. Millions of radio listeners heard him worry about “the Fifth Column that betrays a nation,” characterizing refugees as potential “spies, saboteurs and traitors.”

This “spy hysteria” (a term used by American Quakers) and the hostage question led to severe entrance limitations and to massive slowdowns in processing entry visas. On June 26, 1940, to his and the U.S. State Department’s lasting disgrace, Long sent a memo to State Department officials stating: “We can… effectively stop… immigrants… by… advising our consuls, to put every obstacle in the way… which would postpone and postpone and postpone the granting of the visas.” This suggestion effectively became policy and blocked the issuance of most new visas.

Reverend Charles Joy of the Unitarian Service Committee in Lisbon wrote: “Here in Lisbon… the whole attitude of America seems so selfish and cruel. It would be so easy to open our homes to every one of the endangered ones, with no hardship to anyone anywhere. But we will not.”

Long’s attitudes reverberated at U.S. diplomatic missions. In August 1940, Varian Fry of the American Emergency Rescue Committee observed the prejudice that he saw at Lisbon’s U.S. Legation and Consulate General — in favor of the wealthy, and against Jews. He described the plight of a rabbi who had obtained all his documents for the U.S. in Berlin on May 8. It took him many weeks to acquire papers to leave Germany, making it to his ship on August 8, exactly three months from the date on the visa. The vice-consul, however, decided that the visa had expired at midnight of the 7th into the 8th and would not allow the man to board.

U.S. application processing slowed to a crawl. It took more than six months for authorities to come to a decision, if they came to one at all. The applications required a four-page form, six copies of which had to go to Washington. Even then, the consul in Europe could arbitrarily refuse to grant a visa. In June 1940, the U.S. further tightened its policy, from admitting unobjectionable aliens to allowing only those to enter whose admission “affirmatively appear[ed]” to be in America’s “interest.”

By 1941, nativist pressures about immigrant “Trojan horses” who might be poised to undermine democracy caused further restrictions. Now the U.S. required statements from U.S. citizens attesting to an immigrant’s high moral character, known colloquially as “moral affidavits.” Just as the extermination of European Jewry began, this “extreme vetting” (another Trumpism) doomed European Jews who had no American contacts.

Concerns about American security, then as now, offer us a choice. We can choose to argue that we have “enough problems,” and turn our backs on the worst refugee crisis of our times, much as we did in the 1930s and ’40s. America only reluctantly opened its doors, never even fulfilling its yearly quotas, but ultimately allowing 200,000 Jewish refugees into the country by 1945. Then as now, racism played a major role: anti-Semites opposed the entry of Jewish refugees during the war, just as Trump and white nationalists today seek to reverse a shamefully small quota of Syrian refugees.

But we have another option. We can choose instead to open doors, remembering the many contributions that people like my parents made to the war effort and to postwar economic, cultural and scientific renewal — much as immigrants still do today. If Trump doesn’t believe me on that score, allow me to remind him: All the 2016 American Nobel Prize winners are immigrants, with the exception of Bob Dylan, whose Jewish grandparents came from Ukraine and Lithuania!