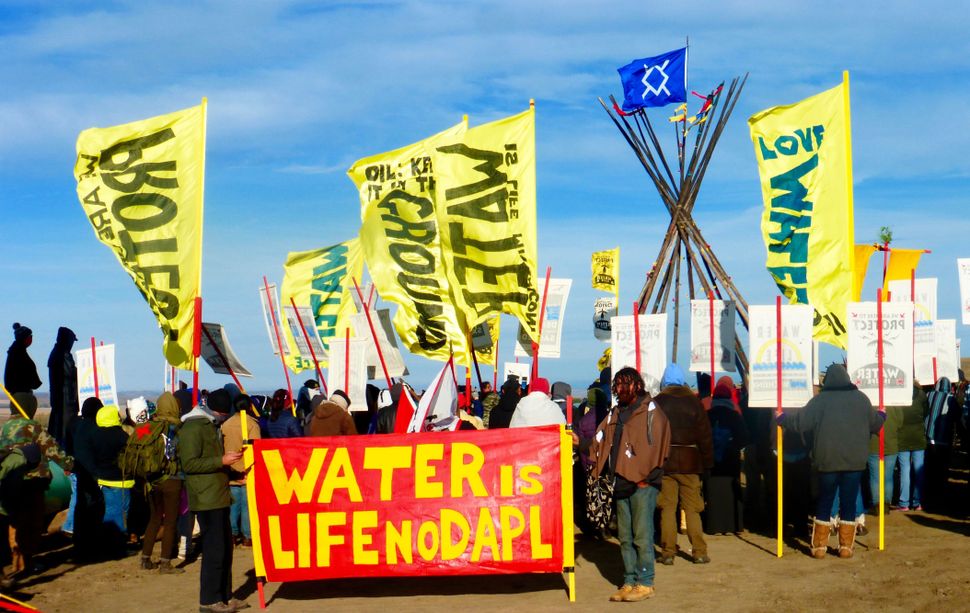 When I was young, my Bubbie was my world. Her stories of humor and grief shaped me, including the story of how, as a child, her home was burned down by Cossacks. My grandmother’s passion for life and for stories was alive in me when, years ago, I interned on Standing Rock Reservation in North Dakota working on an oral histories project. I thought of her as I helped turn interviews of Lakota and Dakota elders displaced from their land into narratives for an anthology for the Tribal Historic Preservation Office. THPOs primarily work to protect sacred and historic sites from destructive development projects, and I also supported that effort as an intern.

Two weeks ago, I spent most of the Ten Days of Repentance in between Rosh Hashanah and Yom Kippur back on Standing Rock. During this time of repair and return, I visited old friends and joined in solidarity with the Water Protectors, the Native people and allies taking a historic stand against the proposed Dakota Access Pipeline. DAPL threatens to poison Standing Rock’s drinking water and has already destroyed a Native burial ground and sacred site. The Protectors are gathered under the slogan “Mni Wicchoni,” Lakota for “Water is life.”

Over the summer, thousands of people, including people from 280 tribes, converged on Standing Rock to hold prayer ceremonies and direct actions to stop the pipeline. Hundreds of flags from tribes across the country fly as you drive into the camp. Native scholar Nick Estes called it “the largest, mass-gathering of Natives and allies in more than a century.”

Though the weather has turned cold, Protectors are still camping, praying and acting to halt the pipeline. People have joined from as far away as Ecuador and the Amazon; there is a palpable energy of possibility and momentum.

A story goes that once the ancient rabbis were trying to describe the Exodus from Egypt when suddenly Serach Bat Asher, a woman who lived for hundreds of years, appeared and said, “I know. I was there. The people left marching through the center of the sea and the water parted into two high walls. On one side we saw the faces of all the generations that had come before us and on the other side we saw all the generations that would come after us. We saw them all, generations of people marching together, enlivened and liberated through water.”

I imagined those walls of water as I camped with the Water Protectors between the Cannonball and Missouri Rivers. Under the vast and bright North Dakota sky, I marveled at a place that we as a country risk destroying in the name of oil. There, I felt the witnessing eyes of my ancestors and my descendants in the struggle for a more just world.

When I learned that the Enbridge Corporation bulldozed a Native gravesite with no consequences from the government, I saw my Bubbie, a pogrom survivor, a memory keeper. I asked her once, “Do you ever want to go back to Romania?” She answered, “Our family is buried in Europe. But even the graves are gone now. I don’t ever want to go back.” When Bubbie died she took with her the last living link to the world of my ancestors, her village. Its graves and holy places are gone. Our family connection to that place was severed. When people on Standing Rock talk about the destruction of graves, I hear Bubbie mourning how we are cut off from our ancestors. I feel called to help stop this desecration from happening today to people I love on Standing Rock.

My Bubbie’s story is with me. She is with me. My friends on Standing Rock would tell you their ancestors are there with them. I am taking my Bubbie into this movement, even though while she was alive, from her own place of trauma, she did not entirely understand why I went to intern on Standing Rock. I am still taking her with me. I am redeeming for myself the memory of those in my family who were too hurt too see beyond their own experiences.

And here is where I try to see beyond my own experiences. Non-Native folks, especially white folks like me, must understand that this is a Native-led movement. Native communities have suffered (and persisted) under the brutal hand of settler-colonialism and environmental racism for centuries. This is a historic moment of Native empowerment and resilience.

And the fight for clean water and a stable climate is necessary for the survival of all of us on this planet. I work for climate justice both as an ally and for myself, taking the lead from communities directly impacted by the fossil fuel industry’s worst practices.

At a teach-in in Bismarck, a young Native organizer said, “This is not only a Native issue; this is a human rights issue that impacts us all. We are going to survive together, or we will die together.” The expansion of oil pipelines impacts all of us. The only way to ensure a future for anyone on this planet is by standing up and organizing against the abuses of the fossil fuel industry.

Since its inception, this country has sacrificed the land, health and lives of poor people and communities of color in the name of extracting and refining fossil fuels and natural resources. Many of these communities are now leading the charge for climate justice. Today, being a good ancestor means responding to those calls to action with “yes.”

Saying yes might mean going to North Dakota for direct actions. It also means donating to support and winterize the encampment, calling the White House at (202) 456-1414 to demand a stop to the pipeline, following Red Warrior Camp and Sacred Stone Camp on Facebook to stay updated, and participating in demonstrations and marches across the country with groups like Rising Tide, Showing Up for Racial Justice and more.

In this new Jewish year and in this moment of climate crisis and powerful resistance, may we see that the faces in the walls of water are not just the faces of whomever we call family, but of all people marching together toward justice, repair and return.

Miriam Grossman is a student at the Reconstructionist Rabbinical College and a Student Rabbi at Kolot Chayeinu in Brooklyn, NY, a community that has raised almost $3,500 to support the Water Protectors.