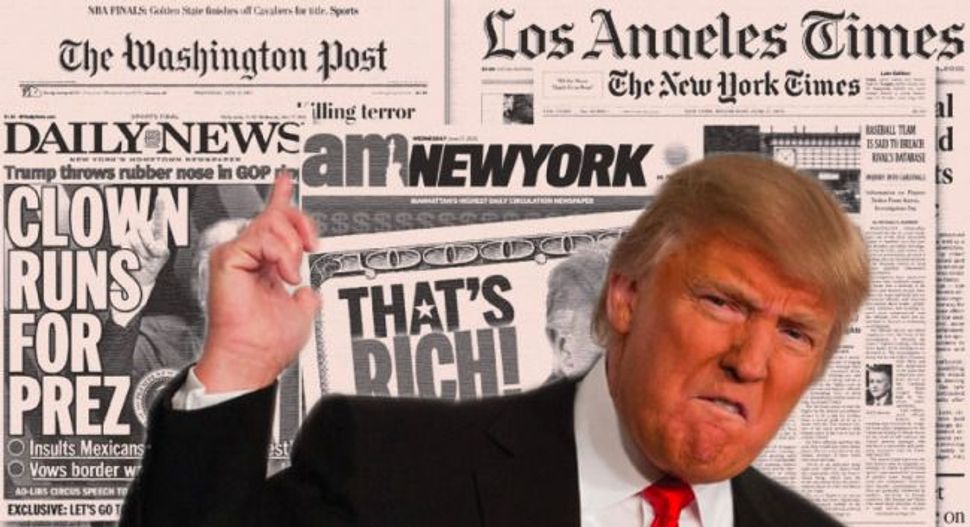 As Election 2016 lurches to its noxious conclusion, the mass media seem to be filled with quickie analyses of who or what is to blame for the debased state to which our public discourse has declined. If you’ve been struggling to follow the discussion and make sense of this debacle, struggle no more. You’re in luck. Herewith, the definitive catalogue of shame.

Topping the list, of course, has to be Donald Trump. He defined the race. He made the rules. From the moment that he came gliding down that escalator and announced his candidacy, it was clear that we were in for an unusual election campaign. When he began to talk about Mexican immigrants as criminals and rapists and the wall he wanted to build, we began to understand that his would be a different sort of candidacy from any we’d seen before.

As the primary campaign proceeded, it started to become apparent just how different Trump was. He wasn’t promoting a coherent policy vision for his presidency — or any vision, for that matter — other than his hostility to trade, Mexican immigrants and Muslims. Instead of policy, what he offered was an endless stream of insults, citations of people who did and didn’t speak nicely about him, and boasting about the reception he was getting and the crowds he was attracting. Some of us started to worry about his apparent obsession with himself, but for most, it was just a spectacle.

As the primary campaign proceeded, he stepped up his personal sliming of his rivals, giving them insulting nicknames — Lyin’ Ted Cruz, Little Marco Rubio, Low Energy Jeb Bush — and relentlessly embellishing with deeply personal assaults. At times his crudeness reached fantastic depths, touching bottom when he boasted of the size of his penis, a historic first in American presidential politics. But the media ate it up, rebroadcasting and dissecting his bile without stop.

Trump was so unusual as a candidate that the news media couldn’t get enough of him. His speeches were broadcast live, often in full, giving him millions of dollars worth of free publicity. It was so extreme that some outlets, like CNN, would stage panel discussions lamenting the way that the media gave Trump free airtime — followed immediately by lengthy, uninterrupted broadcasts of the latest Trump speech. Doing the very thing they’d just gotten through exposing and denouncing.

Cooperating with the media were Democratic leaders, pundits and literati from the East and West coasts, who railed against Trump’s attacks on immigrants, a backbone of our success as a society. Trump’s admirers and allies complained — accurately — that Trump was not denouncing all immigrants, only undocumented immigrants who entered the country illegally and disappeared into the crowds.

Trump’s people didn’t press the case too hard, though. While it was true that Trump’s denunciations were targeted narrowly at the undocumented, the popular sentiment he was tapping into contained a good deal of anti-immigrant bile. So both sides continued in their deceptions — liberals pretending that Trump was denouncing all immigrants, and Trump rightists pretending that’s not what he meant.

On one hand, the Republican Party must bear much of the responsibility for the creation of candidate Donald Trump. For nearly a half-century, since Richard Nixon’s administration, the GOP has pursued the euphemistically-labeled Southern Strategy, which was actually a strategy of appealing to latent and not-so-latent racial hostilities of whites. On the other hand, in practice, the prejudice was cloaked, at least on the national level, in layers of civic virtue, anti-crime sentiment and tough love toward the poor. And yet, those layers represented a genuine ethical sensibility, a sense that bigotry and greed were things to be ashamed of, not to exult in.

Trump effectively brought those prejudices to the surface, appealing openly and proudly to the basest instincts of his voters. His response to appeals to his honor or better nature: “We don’t have time for political correctness.” Put differently, why should I have to cloak my prejudices in polite euphemisms? All I’m doing is saying out loud what Republicans have been hinting at for 48 years.

The Republicans also bear some blame for Trump’s contemptuous dismissal of constitutional and international obligations — his calls to “open up the libel laws, to resume torturing prisoners, to turn America’s back on NATO and sanction nuclear weapons for Saudi Arabia and Japan. Republican Party leaders didn’t call openly for Washington to ignore constitutional or international treaty obligations, but their actions showed what their words didn’t say: They displayed a disdain for the rules of the road every time they shut down the government, threatened to stiff America’s creditors or moved against African Americans’ voting rights.

What’s more, Trump’s disgraceful threats to put Clinton in prison if he defeated her in the election had its antecedents in two decades of Republicans’ delegitimization of both Clintons, in their endless, pointless, fruitless investigations from Whitewater to Benghazi, in their decision to use their majorities in Congress to block every initiative President Obama brought to them, whatever its merits, with the singular goal of making Obama “a one-term president,” in the unforgettable, unforgivable words of Senate Majority Leader Mitch McConnell.

Trump’s outrageous words and behavior, so contrary to the norms and spirit of democracy and plain decency, have made mainstream Republicans deeply uncomfortable. Many, beginning with House Speaker Paul Ryan, have tried to retain a shred of dignity by refusing to “endorse” the nominee. Somehow, though, they’ve allowed themselves to support him without endorsing him. In the end, the good of the party trumped the good of the nation.

Of course, it takes two to tango. Democrats bear a share of responsibility for the state we’re in.

One of the most discussed political books of the last generation was “What’s the Matter with Kansas?” by journalist Thomas Frank. Published in 2005, the book took the prairie state as a case study in the Democrats’ loss of the loyalty of the white working class, and thereby become the minority party in much of America.

Frank began by outlining Kansas’s economic and environmental decline over the last few decades, from a tidy, middle-class, family oriented society to a declining region rocked by poverty, unemployment and addiction. He argued that much of the decline was due to the policies of right-wing Republicans who had dominated the state government since the Reagan era. Republican business interests, he wrote, had managed convince Kansans to vote against their own economic interests — to vote for lower taxes on the wealthy, for slashing government services, for weakening unions, for undermining Social Security — by somehow persuading them that Democrats were out to undermine Kansans’ traditional family values. That the Democrats wanted to normalize ungodly practices like abortion and homosexuality.

You could read Frank’s book backwards and forwards, turn it upside down and shake it and never know that the Republican accusation was essentially true. Since the 1960s the old New Deal coalition, which had sustained Democrats and buoyed American prosperity since the 1930s, had been turned on its head. Once the party of the working and middle classes, with a social and minority-rights conscience that was carried forward on the backs of rising working-class prosperity, the Democrats had transformed themselves into a party of minorities and scolds, out to convince America’s broad middle that its values were screwed up. It should be obvious, but apparently wasn’t, that you don’t win elections by telling people what’s wrong with them and their values.

Hand in hand with the back-seating of the Democrats’ economic agenda, the abandonment of the white working class, is a related bad habit: the Democrats’ tendency to nominate presidential candidates because they would make an excellent president, disregarding the pesky question of whether they’re electable.

It’s a longstanding practice. Democrats repeatedly fall in love with candidates whose skills and experience qualify them to do the job, without considering whether said candidate is likely to win the job. Put bluntly, they repeatedly overvalue brains and undervalue charisma.

The list of worthy but boring or otherwise unelectable Democratic presidential nominees is long and depressing: Al Smith, John Kerry, Al Gore, Michael Dukakis, Walter Mondale and the granddaddy of them all, Adlai Stevenson.

This is no secret. Hillary Clinton herself acknowledged the issue directly in an October 26 radio interview, admitting that she is “not a natural politician” like her husband or Barack Obama. Voters don’t warm up to her as naturally as to some other candidates.

The next question Democrats should be asking is: If that’s the case, why are you running? Or, to reframe, why should we nominate you?

Clinton partisans commonly respond to the critique with indignation. They insist that voters should be smart enough to reward skills and experience, not frivolities like looks or charisma. They pitch their message to an electorate that doesn’t exist, and then get angry when the actual voters don’t respond correctly. They forget — or deliberately ignore — the fact that the first job of a politician is to get elected. Failing that, nothing else matters.

They forget or ignore the truth attributed to the great curmudgeon H.L. Mencken: Nobody ever went broke underestimating the intelligence of the American voter. He was right, of course. Underestimating the voters is always the safer bet. Overestimating can ruin you. And yet, in their sublime optimism, overestimate is what Democrats do time after time. And Republicans run rings around them. If it’s not the election of a George W. Bush, it’s the failure to turn out the vote for midterm elections, allowing Republicans to capture state legislatures, governors’ mansions — and the state redistricting commissions that determine who will control Congress. Democrats play checkers while Republicans are playing three-dimensional chess.

In the end, Clinton and Trump were all too evenly matched. Each one was a gift to the other.