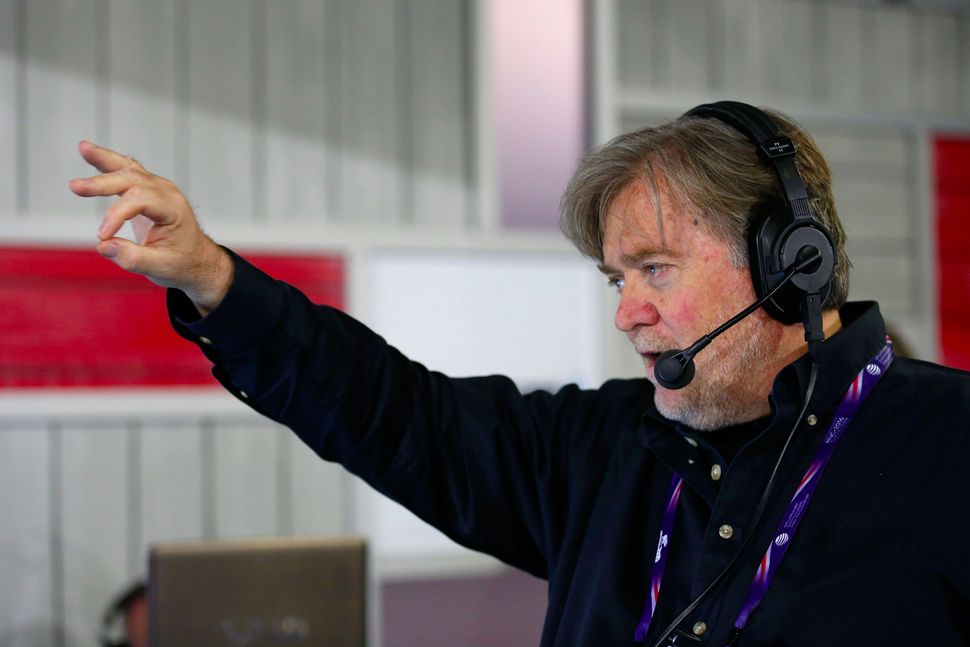 American Jews have a new reason to be concerned about a Donald Trump presidency. There was already a major outcry over the anti-Semitism coming out of Trump’s campaign and his supporter base, and that concern has skyrocketed with the selection of Steve Bannon, a hero of the “alt-right” and former CEO of Breitbart, as a chief strategist in the White House.

But despite many headlines to the contrary, it’s unclear whether Bannon is an actual white supremacist or white nationalist himself — even though, under his watch, the Breitbart brand became deeply intertwined with the “alt-right.” Writing about Bannon’s appointment, his former colleague Ben Shapiro of the Daily Wire wrote today, “I have no evidence that Bannon’s a racist or that he’s an anti-Semite… [however] Bannon has openly embraced the racist and anti-Semitic alt-right — he called his Breitbart ‘the platform of the alt-right.’” Already, the Religious Action Center of Reform Judaism and the Anti-Defamation League have released statements regarding his appointment.

While I’m not exactly over the moon about Bannon’s appointment, I do not believe that his new title means that a white supremacist White House is ascendant. All reports from the people I know who are personally familiar with him suggest that he’s cold, calculating and power-hungry. Such figures aren’t exactly rare within the halls of any White House; they are par for the course in Washington circles. Instead, it’s the fact that Bannon seems willing to do anything — even associating himself with the “alt-right” if it means he can profit off it — that gives me most cause for concern.

And yet, despite this concern about Bannon, I do not want to hear a single terrified synagogue sermon about him. Here’s why.

When I still identified as a Reform Jew, I sat through countless rabbinic sermons about blatantly political subjects. Climate change was mentioned in the same breath as the weekly Torah portion, and once I even heard Barack Obama compared to Jesus! I felt increasingly unwelcome and uncomfortable as a political conservative, and eventually I stopped attending. It was impossible to ignore the fact that any negative attention toward a political topic was always oriented in one direction: rightward. The politicized, liberal bend on religious topics in the Reform movement became too much and I gradually shifted right religiously, as I already had politically. I found myself gravitating toward the Modern Orthodox camp, where not only did most of my fellow Jews believe what I believed politically, but even more importantly, politics rarely came up in communal settings.

This past week, as I saw many synagogues’ responses to Trump’s win, I was reminded of why I left the Reform movement. To be clear, I was no fan of the President-elect nor did I vote for him, despite having been a registered Republican for most of my adult life. But in liberal synagogues across the country, a state of mourning set in; some rabbis compared the response to sitting shiva. Tears were shed and support groups sprang up — not because there had been a national tragedy, but because we’d experienced a democratically decided election.

According to preliminary research conducted by Pew, roughly a quarter of American Jews supported Trump’s candidacy, performing nearly on par with previous Republican nominees. In the pages of the Forward, three Jewish supporters of Trump explained why they backed his campaign despite some Jews’ concerns about anti-Semitism. Their consensus: accusations of anti-Semitism are “absolute nonsense” (in the words of one, Joshua Seidel). Is Trump responsible for the actions of his supporters? That is a matter of opinion; those who voted for Trump hold one, and those who voted against hold another.

My question now is: How will Trump-voting Jews like Seidel feel about walking into these synagogues in the coming weeks and months? Will they feel welcome among religious leaders and congregations who treated the victory of their preferred candidate as a national tragedy, and who are now poised to rend their garments over Bannon from the bimah?

A synagogue’s entire purpose is to provide a religious sanctuary for its members, not to provide a platform to political beliefs, movements or causes (we have enough of those). Many liberal synagogues go out of their way to make it clear to individuals who may feel marginalized in more right-wing religious settings that they have a home; this emphasis on tolerance is a priority of paramount importance. Tolerance, however, cannot only extend to those with whom the majority of the community is already comfortable; it should also extend to those Jews whom they do not understand.

A synagogue’s capacity to feel like a true sanctuary should not depend on one’s political beliefs or choices at the ballot box. For many American Jews, the reaction of their religious leaders to this election may have stripped a sacred space from their lives. In order for our nation to heal from the division caused by this election, we’re going to need to feel comfortable in our religious communities and know that an honest, open dialogue can occur. If we continue to react to Trump’s win, and now to Bannon’s appointment, by mourning instead of understanding, that will never happen for many American Jews.