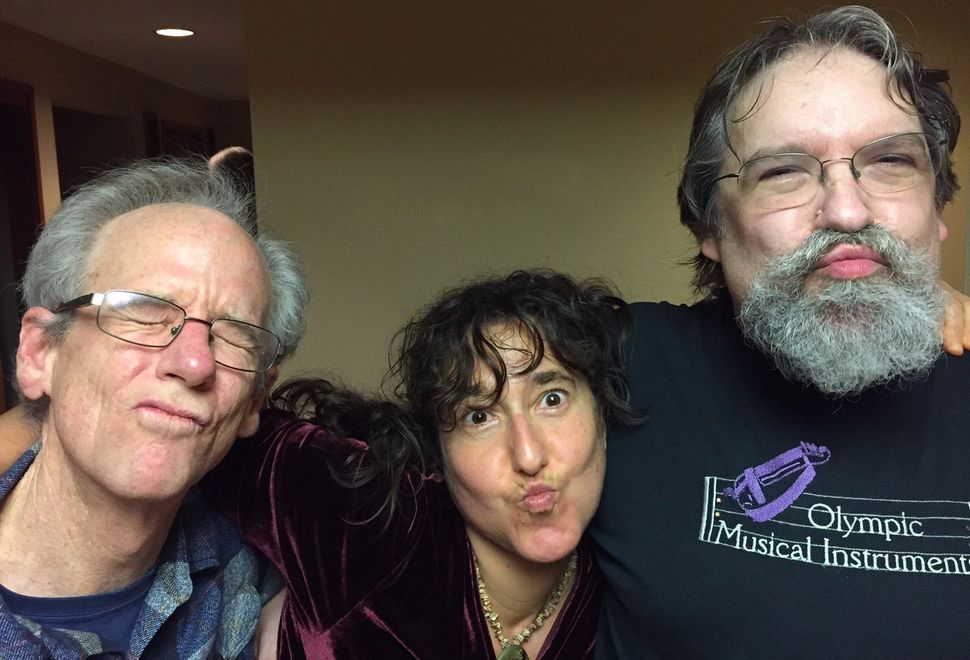 Image by Courtesy of Loolwa Khazzoom

I just received a text from my guitarist, urging me to change our band name from “Iraqis in Pajamas” to something else — anything else, as long as it has no Middle Eastern connotation. A young Muslim woman at the local university was just attacked and hit in the head, he informed me, and the largest mosque in our area was just vandalized.

It’s these pivotal moments that clarify our identity and character, as well as what our standing is in society and how we choose to walk through the world. My guitarist and I live about 20 minutes away from each other, in an idyllic Northwestern rural area peppered with small towns. And yet, we walk through radically different worlds.

I am an Iraqi-Israeli-American Jewish woman, with a Judeo-Arabic name – a real crowd-pleaser for racists and misogynists, providing oh so many choices for their hating pleasure. My guitarist, to the contrary, is your basic white guy from a presumably Christian family background. Which all goes to say, he can choose whether to dive into the fray or hang out on the sidelines, with no consequence for his personal identity or integrity.

For him, avoiding hate mongers is not hiding per se; it’s just stepping out of the line of fire. For this reason, my guitarist is having a hard time understanding the price he is asking me to pay in considering a name change. To him, it’s just a matter of veering away from “politics” so that we can focus on creating music and having fun.

But I did not call my band “Iraqis in Pajamas” for political reasons, any more than the young Muslim victim was practicing Islam for political reasons. “Should that woman nonetheless stop practicing Islam, change her name and stop wearing a hijab?” I asked my guitarist in a reply text. For that matter, I continued, should I not only change the band name, but also change my personal name and, considering the spike in vandalism of synagogues across America recently, stop practicing Judaism?

Many years ago, I had a fling with a Palestinian guy who later revealed that his family and he were from Iraq. During one of our conversations about identity, he asserted that the reason Jews faced discrimination and persecution in Iraq was because “they insisted on calling themselves Jews.” It’s been about 20 years, and I still remember his exact words. Well, yes, we called ourselves Jews because we are Jews. The oppression Jews faced was caused not by our self-identifying as Jews, but by others having a problem with our being Jews, and therefore, with our being, period.

True, things are heating up in the United States. But things have been hot for people with my mashup of identities, throughout my life. Case in point: In 2002, I moved to Israel, amidst a wave of daily terrorist attacks against Israeli citizens, in which two of my friends were nearly killed. About half a year later, I flew to the United States to give a presentation at Harvard about historic Arab violence against Jews indigenous to the Middle East and North Africa, like my family in Iraq.

During the week of that presentation, the United States attacked Iraq. En route back to Israel, I was bizarrely stopped at the entrance of the airport by two security guards who seemed to be waiting for me. They requested my passport, asked my name (despite seeing it on said passport), then pointedly inquired, “What kind of name is that?” I paused, rather amused. “Iraqi,” I answered squarely.

For the next three hours, my body and belongings were searched — including my computer, which was entirely pulled apart, and each piece of the many papers in my suitcase, which security passed over thoroughly with some kind of a wand. At first, I found the whole thing rather humorous, pointing out to the security guards how ironic it was that they were harassing me as an Iraqi, when I just gave a presentation about Iraqis harassing my family as Jews. By the end of the ordeal, however, I was in a pool of tears. I felt abjectly humiliated.

Still, despite this and other experiences that range from inconvenient to outrageous, I refuse to change my name. It is my name; it was my grandmother’s name; and it keeps the language of my ancestors alive, every time someone says hello to me. Besides, it’s a rock star name, and anyone with rock star aspirations knows you need a rock star name! Which brings me back to the name of my band.

I named it “Iraqis in Pajamas” because Iraqis in Israel historically have a reputation for immediately stripping out of our work clothes and lounging around in our pajamas, wherever possible. For this reason, when people asked where I was living, and I answered Ramat Gan — a predominantly Iraqi Jewish suburb of Tel Aviv — they invariably replied, “Ah, Iraqim bepajamama (Iraqis in pajamas).” I thought it was hilarious.

Regardless of the back story, being asked to change the name, essentially to kowtow to hater mongers, does not sit right with me. If we change the name of the band, what comes next — changing the names of the songs? Changing their content? Self-censorship is a slippery slope, which ultimately can lead to erasure of self. And while the topics I sing about are diverse, my core message is one of staying true to ourselves and healing on every level — individual, communal and societal. To this end, I prefer not to run from any controversy but rather to leverage it, to help facilitate dialogue about identity and question the false barriers we construct between ourselves as human beings. Whatever reaction it elicits, I see “Iraqis in Pajamas” as being, among other things, the start of a conversation.

So no, dear guitarist, I do not want to change the name of the band. “Iraqis in Pajamas” is a playful name, with a personal story behind it. And especially during a time of hate mongering, I think it’s important for us not only to remain true to ourselves, but also to remain downright silly.

Loolwa Khazzoom has worked as a pioneering Jewish multicultural educator, writer, healer, musician, and public relations manager. Today her music includes songs that are a mashup of Iraqi Jewish prayers, punk rock and original lyrics. Loolwa can be found on twitter at @loolwa and on the web at www.loolwa.com. Her band can be found at www.iraqisinpajamas.com