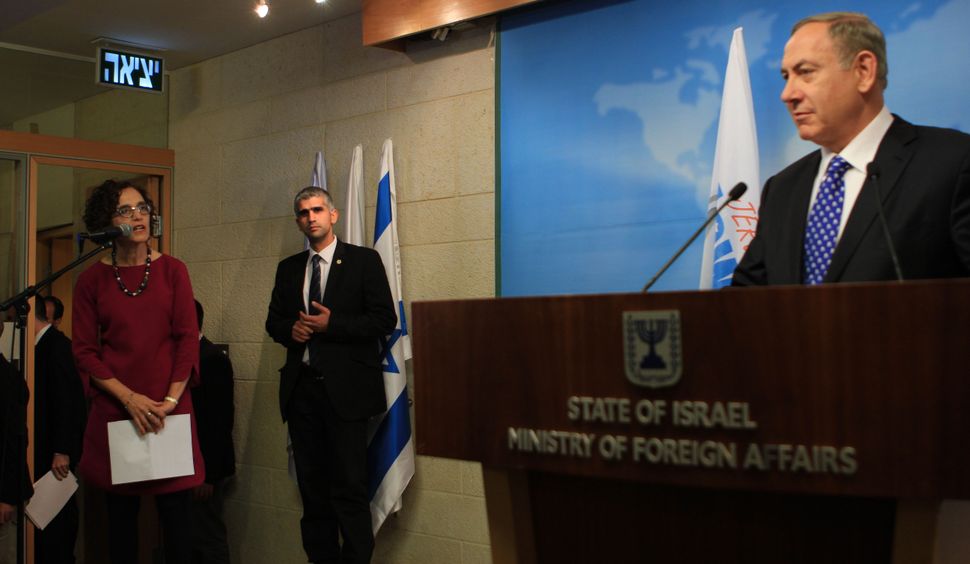 Jerusalem —  Those who know Israeli Prime Minister Benjamin Netanyahu far better than I do said that the real Bibi was on display as he addressed the International Jewish Media Summit in Jerusalem Tuesday night.

In that case, Netanyahu — the only Israeli elected prime minister three times in a row, the man who says he is the leader of the Jewish people worldwide — is variously articulate, sharp, arrogant, boastful, funny, mean, quick to interrupt, occasionally charming and surprisingly combative given that most of the journalists in the room were eager believers in Israel.

That’s how he sounded and acted. Substantively, he often seemed to directly contradict the message that we in America get about Israel from his supporters.

His joyful boasts about Israel’s amazing technological and political success, evidenced by the scores of nations beating a path to his office for trade agreements and business partnerships, seem completely at odds with the anxious fears over Israel’s diplomatic and economic isolation that we constantly hear about in the United States.

His dismissal of anti-Semitism coming from the American far right as a “fringe phenomenon” might be a relief to those Jewish leaders who don’t want to pick a fight with a new Trump administration and its chief strategist, a man who has given a journalistic platform to the white nationalists known as the “alt-right.” But to similarly dismiss the anti-Semitism on the radical left, as he also did, doesn’t at all jibe with the tens of millions of dollars being spent by his government and Jewish organizations to fight de-legitimization and the movement to boycott, sanction and divest from Israel.

Netanyahu swatted away my question about his government’s failure to implement its own agreement to create a full-fledged egalitarian prayer space at the Western Wall, saying that everything takes time in Israeli politics. I can’t imagine that is of comfort to the Reform and Conservative leaders who have staked their own legitimacy on Israel’s commitment to religious pluralism.

It was an odd experience for me, as the moderator of this session meant to be the highlight of a lively, informative three-day conference coordinated by the Israeli government for about 50 journalists from Jewish media organizations around the world. (Consistent with our policy, the Forward did not accept the government’s subsidy for me to attend.)

I had been told that Netanyahu would give some prepared remarks, then would probably take a few questions. Instead, he goaded me to ask him something right away.

So I noted that Jewish journalists in America have been the target of well-documented, unprecedented anti-Semitic attacks on social media during and after the recent presidential election. Since some of these attacks come from Trump supporters, I asked whether that would affect his relationship with the new administration.

He repeated what he had told the Saban Forum in Washington on Sunday — that anti-Semitism in America is a “fringe phenomenon” at odds with the ethos of the country, that it hasn’t taken root in the American polity and that he didn’t think it would. That was reassuring, in a way.

But it doesn’t at all square with the persistent message from his government and many establishment Jewish organizations — that American college campuses are hotbeds of anti-Semitism masquerading as anti-Zionism, coming from the far left but endorsed, in various ways, by liberals (even Democrats!) not quite as radical.

Neither did his unbounded optimism about the strength of Israel’s growing ties with Africa, Asia and South America match the doom and gloom we hear about the unfair economic and political isolation Israel suffers. Netanyahu even predicted that this surge of business partnerships would lead to a marked shift in Israel’s outsider status at the United Nations.

His answer to a softball question from a Belgian journalist was another missed connection. She noted the concerns about diminishing press freedom in Israel and the fact that the international media watchdog Freedom House just downgraded Israel’s ranking to “partly free.” Then she asked for help in defending Israel’s reputation in her home country.

Netanyahu pounced as if he was waiting for the moment. These criticisms of Israel are absurd, ridiculous, he said. For proof that Israel has the “freest press in the world,” he jokingly noted how often he and his family are the subjects of negative stories. No other leader is maligned in the press as often as he is, he asserted.

So, of course, he will criticize journalists by name, or try to sue them, or intervene to stop negative coverage.

“Free speech is not reserved only for journalists,” he reminded the roomful of journalists.

Except he neglected to note the reason for Freedom House’s downgrade and the growing concern among civil libertarians in Israel: The increasing dominance of Israel Hayom, now the country’s leading print outlet, offered for free and bankrolled by Netanyahu’s staunch political backer, Sheldon Adelson. Oh, and the fact that he, Netanyahu, also named himself communications minister.

After the session ended, some of the women journalists in the room were furious, sure that he acted as he did because I was the moderator. I appreciated their support, but male colleagues tell me that Netanyahu can be similarly dismissive to them, too.

Perhaps, like his soon-to-be counterpart in America, he believes he doesn’t need the mainstream media anymore. But, in that case, I have to wonder why he invited us to Israel.