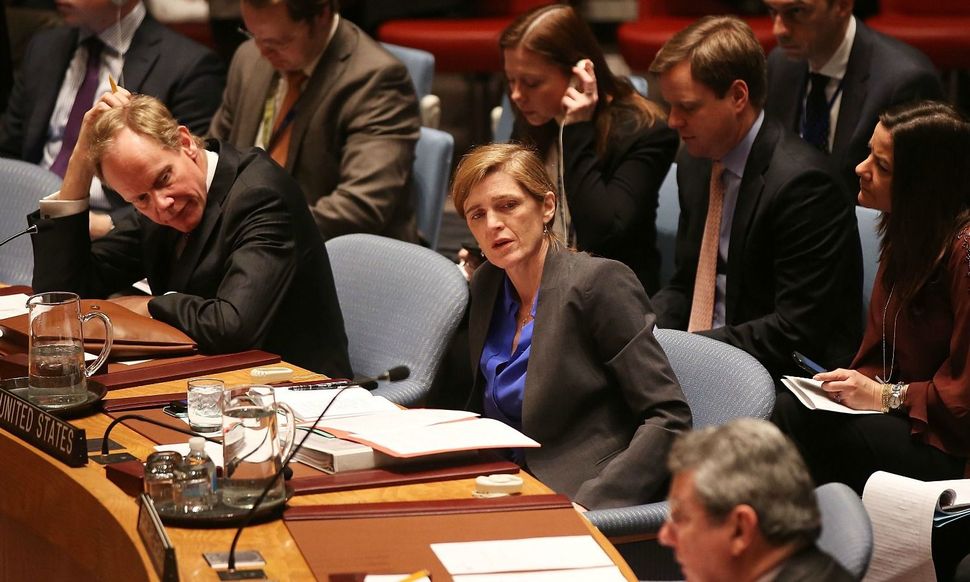 Relations between Israel and the United States sank on Friday to their lowest point in years after the Obama administration declined to veto a resolution in the United Nations Security Council (full text here) declaring Israel’s settlements in the West Bank, “including East Jerusalem,” to be illegal under international law.

Israeli leaders reacted with fury. A statement from the prime minister’s office called the resolution “shameful” and said that Israel would not observe it. It went on to charge that the “Obama administration not only failed to protect Israel against the U.N.’s obsession with Israel, it collaborated with the UN behind Israel’s back.”

The government was backed by Yair Lapid of the opposition Yesh Atid party, who declared that Israel is united against the resolution and “regarding the U.N. vote there is no division in Israel between opposition and coalition.” Labor Party and Zionist Union chair Isaac Herzog, trying to sound a patriotic note while attacking Prime Minister Benjamin Netanyahu, condemned the resolution but blamed Netanyahu for pursuing policies that left Israel isolated.

In the United States, the vote was condemned by congressional leaders from both parties and by heads of the best known Jewish organizations. The Anti-Defamation League said it was “outraged over the U.S. failure to veto this biased and unconstructive UNSC resolution.” The American Jewish Committee was “deeply disappointed.”

Organizations on the left took the other side. Americans for Peace Now welcomed the U.N. vote, saying the resolution “is pro-Israel in the deepest sense of the term, supporting Israel’s existence and security, and standing against those who would sacrifice both at the altar of settlements, for an ideological, expansionist agenda.” J Street praisedthe U.S. decision to abstain rather than veto, claiming the U.N. resolution “reaffirms the need for a two-state solution and calls for a halt to actions by both sides that serve to undermine the prospects for peace.”

In fact the resolution didn’t say much that hasn’t been said countless times before. It condemned Israeli settlements in the West Bank — “including East Jerusalem” — as illegal “under international law” and “a major obstacle to the achievement of the two-State solution and a just, lasting and comprehensive peace.”

If there was any change in tone, it was in the swipes it took at the Palestinians for their contributions to the stalemate. The resolution said that the imperatives to combat terrorism and to “clearly condemn all acts of terrorism” are “obligations under international law,” effectively putting Israel’s complaints about Palestinian behavior on the same legal plane as the Palestinian complaint about Israeli settlements.

It also cited “international law, including international humanitarian law” as bases for the obligation to “observe calm and restraint” and “refrain from provocative actions, incitement and inflammatory rhetoric.”

It can’t be overlooked that the jabs at the Palestinians were weaker than the criticism of Israel. The Palestinians weren’t even mentioned by name in those passages, although the intention was quite clear. Israel, on the other hand, had its actions tied to it like cement shoes on a New York mob victim.

Nonetheless, it shouldn’t be ignored that the resolution — a Palestinian initiative that was largely drafted by Egypt with Arab League input — condemns Palestinian terrorism and incitement right alongside the condemnation of Israel’s settlement construction. It’s noteworthy, too, that the condemnation of settlements is repeatedly framed in terms of their hobbling the goal of a two-state peace agreement and, as the preamble puts it, the U.N.’s “vision of a region where two democratic States, Israel and Palestine, live side by side in peace within secure and recognized borders.” That sort of framing, in which the purpose of the exercise is to ensure the welfare of Israelis as well as Palestinians, was not always present in U.N. statements on Israel. It appears to reflect the changing terms of the conflict — specifically, an acceptance on the Arab side that any end result will inevitably include a secure, recognized Israel.

In that sense the resolution can be seen partially as an Israeli victory, at least in the long game. That doesn’t change the optics of the U.N. action, in which the Palestinians once again used their overwhelming advantage in the diplomatic arena to deal Israel a setback. On the larger chessboard of the Israeli-Palestinian conflict, Israel has the overwhelming advantage on the ground while the Palestinians have the advantage in the diplomatic sphere. Each side acts as though its own advantage is part of the natural order while the other side’s successful use of its own advantage is an outrage.

Israel was particularly stung by a provision in the resolution that called on “all States” to “distinguish, in their relevant dealings, between the territory of the State of Israel and the territories occupied since 1967.” The provision was a scarcely veiled endorsement of measures that seek to deny to settlements benefits that are granted to Israel. These range from European requirements that settlement products be labeled as such, not “made in Israel,” as well as duty-free import rights granted to Israel but denied to settlement products and scientific and academic programs available to Israelis and Israeli institutions but not to West Bank facilities. Israel claims that legitimizing boycotts of the settlements opens the door to boycotts of Israel.

The claim that Israel’s West Bank settlements violate international law has been taken up by the Security Council repeatedly since 1979. At times Washington has blocked the resolutions with a veto, as the Obama administration did in 2011. On other occasions Washington has abstained and allowed the resolution to pass, as it did this week.

This time Washington hid its intentions up to the last minute. Government sources in Jerusalem were making it clear, however, that they expected America to let the resolution pass.

It’s a measure of the bitterness that has grown up between the two allies, reporters were quoting unnamed officials in Jerusalem claiming that the United States had “colluded” with the Palestinians to draft the resolution and get it through the council. Washington flatly denied the allegation.

The use of the American veto on Israel’s behalf is widely misunderstood by Israel’s supporters as an automatic protection from criticism. In fact it is used consistently to block resolutions that might be lead to action against Israel of the sort the council has taken, for example, against Iraq, Iran or North Korea, all of which have been subjected to sanctions, military action or both. In the case of anti-Israel resolutions that are merely declarative, Washington or may not use its veto, depending partly on the tenor of U.S.-Israel relations at the given moment and partly on Washington’s assessment of its own diplomatic position and the risk of incurring unnecessary resentment from countries perceiving American overreach.

The claim that settlements are illegal is based on the Fourth Geneva Convention (text), an international treaty governing the treatment of civilians in a war zone or in territory occupied in the course of a war. It was adopted in 1949 as a humanitarian measure in reaction to Nazi atrocities. Article 49 of the convention forbids the transfer by an occupying power of its civilians into the occupied territory.

Israel maintains that the Geneva Convention doesn’t apply to the West Bank. The treaty states at the outset, in Article 2, that it addresses situations in which one signatory state captures the territory of another signatory state in the course of war. Israel captured the West Bank in 1967 from Jordan, which had no legal claim to it, so it didn’t capture the territory “of” another state.

The territory was slated under the 1947 U.N. Partition Plan to become an Arab state alongside the Jewish state of Israel. When the Palestinians rejected the partition plan and refused to set up their state, Jordan captured the territory and annexed it. Only two countries, Britain and Pakistan, recognized Jordan’s annexation of the West Bank as valid and legal.

Given the uncharacteristically balanced tone of the resolution — Israel took more heat than the Palestinians, but overall the statement was far less one-sided than usual — it was hard not to suspect that Israel’s outrage was at least partly tactical. For one thing, Israel hates to be reminded that no nation in the world recognizes its annexation of East Jerusalem. More broadly, it continues to view itself as having a fair claim to the soil of the West Bank that’s at least as legitimate as the Palestinians’, and blanket condemnation of the settlements is thus an attack on Israel’s claim to the biblical heartland.

The settlement issue is also a proxy for the peace process blame game. Many of the statements condemning the U.N. resolution bemoaned the fact that it places all the blame for 5he stalemate on settlements. It does nothing of the sort — it condemns the settlements as an obstacle to a peace agreement, but it doesn’t say they’re the only or even the main obstacle. Nonetheless it’s an opportunity for the Netanyahu government and its allies to suggest that the settlements should get none of the blame.

And, of course, the Netanyahu government has an eight-year-old beef against the Obama administration that runs at least as deep as the Obama grudge against Netanyahu. The two men came into office within a month of each other in 2009, each with a mandate to reverse the legacy of his predecessor. Obama was elected to move leftward from the conservative and hawkish policies of George W. Bush, while Netanyahu came into office with the intention of moving Israel rightward from the dovish policies of Ehud Olmert. Each has tried ever since to maintain that the distance that’s grown up between the two allies during their overlapping tenures was due to the other country changing course.

To a degree, therefore, the furor over the U.N. resolution is an opportunity for each side to take one more good whack at the other before Obama fades into history.