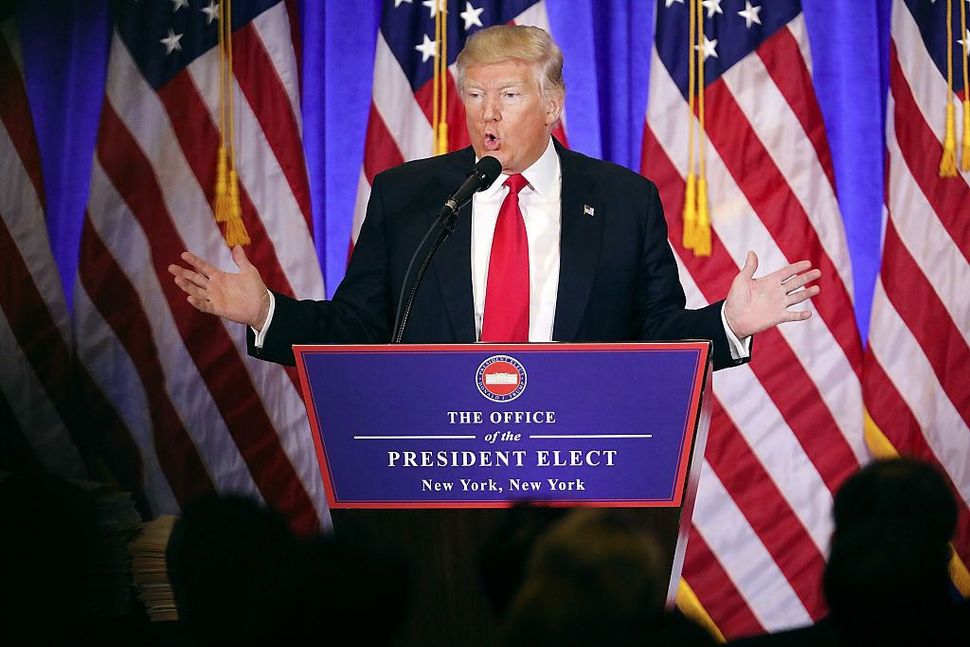 Twice in one day, President-elect Donald Trump compared himself to the victims of Nazi persecution.

The first instance was in one of his infamous tweets, responding to two very different media reports, by CNN and BuzzFeed, about intelligence briefings given to Trump last week regarding his relationship with Russia. . “One last shot at me,” he harrumphed on Wednesday morning. “Are we living in Nazi Germany?”

It was an outrageous statement, but in keeping with his infantile monologue of grievances expressed in 140 characters.

The second instance came later that day during his first press conference in almost six months, in which Trump compared those American intelligence agencies to Nazi Germany. Given the context, this remark was much more egregious and unacceptable

This wasn’t an inelegant, offhand phrase but an inaccurate and damning slur said in the context of truly worrying behavior — Trump’s unprecedented assault on journalists and his denigration of the work of the U.S. government. This shouldn’t just outrage us as Jews. We should be outraged as citizens. And our organizations should be outraged on our behalf.

And because of this, it is troubling that, as far as I know, only a few Jewish organizations — the Anti-Defamation League, the Anne Frank Center for Mutual Respect, the American Jewish Committee (in a tweet) and the New York City Council’s Jewish Caucus — condemned Trump for trivializing the totalitarian, genocidal German regime. Where are the others? Why the silence? Why, when these defense groups are quick to vilify remarks more mundane, are they allowing the next president to get away with this unchallenged?

Knowing that Trump has a very thin skin and has engaged in questionable behavior in the past, I can sort of understand his fury at BuzzFeed, which published on its website a 35-page dossier alleging some pretty awful things about the businessman-about-to-turn-president. Personally, I disagree with Buzzfeed. What distinguishes us as journalists is that we try our best to verify before publishing, not so that “American can make up their own minds,” as Ben Smith, BuzzFeed’s editor-in-chief, wrote in defending his decision.

Nonetheless, BuzzFeed made a considered choice and is being held accountable. Other news outlets, notably CNN, said that they knew of “compromising personal and financial allegations” but did not publish them because they could not independently verify their accuracy.

But these distinctions matter nothing to Trump. At the press conference, he went in for the kill, labeling BuzzFeed “garbage” and shouting down a reporter from CNN in such a rude and disparaging way that it has no precedence.

Imagine all the unverified, untruthful things that have been said about President Obama — many from Trump’s own mouth. Now, imagine Obama berating a reporter that way on national television. You can’t. It’s unimaginable. I can’t imagine George W. Bush doing it, either. Trump showed complete disrespect for the function of a free press in our democracy; even when an individual media outlet oversteps its role and acts irresponsibly, the institution must be upheld.

The same is true for our government institutions, yet Trump went on to essentially compare the intelligence agencies to the Nazis. Repeating his criticism of those agencies for allowing the release of what he said was erroneous information about him, Trump said, “I think it’s a disgrace, and I say that — and that’s something that Nazi Germany would have done and did do.”

In just a few hours, Trump disparaged in the ugliest terms two pillars of the American system — a free press and an independent, professional government administration. And he did so by abusing the memory of Holocaust victims and survivors.

“Has he no sense of shame?” asked Steven Goldstein, executive director of the Anne Frank Center, the American chapter of an international group that fights prejudice to honor Anne Frank’s legacy. “The president-elect has shown the grossest possible insensitivity to survivors of the Holocaust before he even takes office. Either he is completely callous in attacking U.S. intelligence, or he is so ignorant of history that you would never want this man to be president.”

Even if myriad Jewish organizations stood up with Goldstein and the ADL to condemn Trump’s remarks, I don’t expect it would change his behavior, nor the minds of those who willfully ignore or excuse the danger in his words. But it would begin to bolster a counter culture that must steadily and strongly present a different discourse in America, or these next four years will see a coarsening of public rhetoric so severe that we may never recover.

There is one person, though, who should be able to persuade Trump to stop using Nazi references in such an awful way: his son-in-law, the grandson of survivors. Maybe the Jewish organizations that won’t publicly condemn Trump will try to whisper in Jared Kushner’s ear.

They could listen to Evie Blaikie, a Holocaust survivor, who spoke at a hastily-called press conference yesterday outside New York’s City Hall. “We can’t be kept silent. We have to speak up no matter what the ramifications,” she said.

Or they could just stay mum.