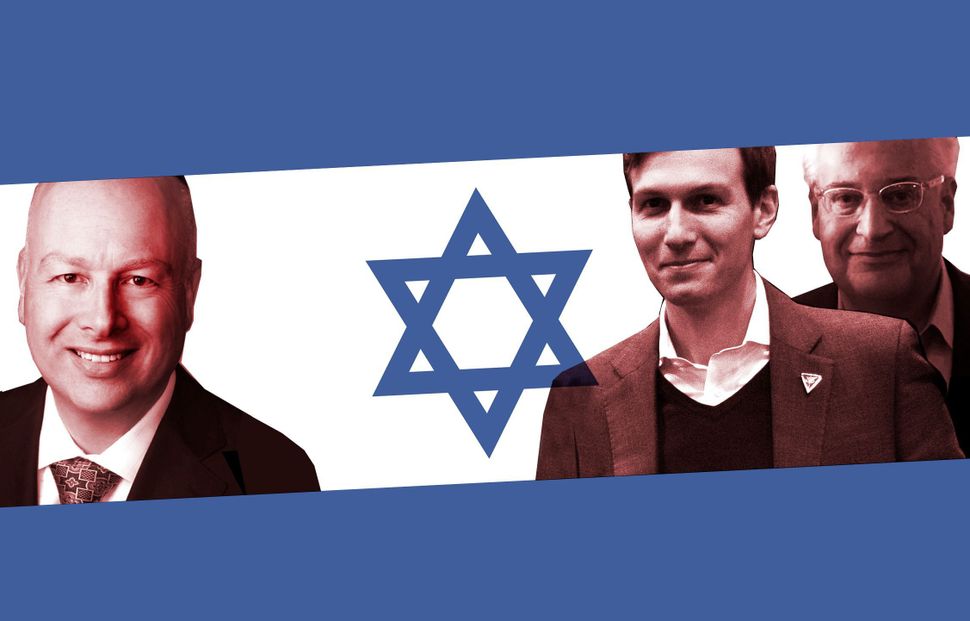 If there’s one thing conservatives hate, it’s “identity politics”: the claim that membership in a particular ethnic, racial or gender group gives someone special authority over policy toward that group. Tell conservatives that women should make abortion policy, or Latinos should make immigration policy, or African Americans should decide whether affirmative action is fair, and they’ll howl.

So how do conservatives feel when Jews — simply because they are Jews — dictate American policy toward Israel? They feel absolutely fine. Donald Trump has proved that.

Consider three of Trump’s key Israel-related appointments: Jared Kushner, David Friedman and Jason Dov Greenblatt. Last November, Trump told The New York Times that Kushner might play a major role in American policy toward Israel and the Palestinians. In December, according to The Washington Post, Kushner began doing just that. Along with Steve Bannon, he pressured Egypt’s government to withdraw a United Nations resolution condemning settlements.

Why did Kushner obtain this role? Because he’s Trump’s son-in-law. And because Trump thinks that Kushner knows a lot about the Israeli-Palestinian conflict.

But that’s not true. When Times’ reporters Peter Baker and Isabel Kershner checked on Trump’s assertion, here’s what they found: “Few of the Israelis and Palestinians who have been immersed for years in the fitful and frustrating peace process, such as it is, could recall ever meeting Mr. Kushner,” and that “phone calls and emails to dozens of politicians, diplomats and journalists in Israel and the Palestinian territories yielded few who had actually encountered him.”

So why did Trump think Kushner knows a lot about Israel and Palestine? Most likely, because Kushner is Jewish. Trump assumed that identity equaled insight, which is exactly what conservatives generally hate about identity politics.

What, by contrast, are Friedman’s qualifications? He’s a bankruptcy lawyer who represented Trump’s casinos. And he gives money to various Israeli causes, especially settlements.

How did Trump choose a man who has never held a diplomatic post, never done any academic research on the Israeli-Palestinian conflict and never worked in the Middle East?

In April, the Forward’s Josh Nathan-Kazis told the story. A few days before the New York Republican primary, a group of Orthodox Jewish activists came to Trump’s office. After meeting them, Trump summoned Greenblatt, who was his chief legal officer and an Orthodox Jew. Trump then deferred some of the questions to Greenblatt, and told the visitors that Greenblatt and Friedman would be his chief Israel advisers.

Now Trump has chosen Friedman to be his ambassador to Israel and Greenblatt to be his adviser on international negotiations, including those between Israelis and Palestinians. Neither is remotely qualified for his role, but both men possess the qualifications that impress Trump most: They worked for him, and they are Jews.

Trump is hardly alone in choosing Jews to make his Israel policy. Lots of politicians, including Barack Obama, have done so, too, though they usually pick Jews who have better qualifications. This is, in part, because Jewish Israel advisers offer political protection; it’s harder to call them anti-Semites. It’s also because politicians often assume that Jews are knowledgeable about Israel, whether or not they actually are.

But assuming that people possess specialized knowledge because they hail from a particular race, religion, ethnicity or gender — or lack that knowledge because they don’t — is what conservatives rightly loathe about identity politics. It contradicts Maimonides’s famous justification for learning astronomy from the idolatrous Greeks that “one should accept the truth from whatever source it proceeds.”

So why haven’t more conservatives criticized Trump’s choices of Kushner, Friedman and Greenblatt? Because in this case, identity politics furthers their ideological goals. The Jews that Trump has chosen, though unqualified, will likely defer to Benjamin Netanyahu more than Barack Obama has.

“One of the more salutary outcomes of the recent election,” the syndicated columnist Charles Krauthammer wrote after Trump’s victory, “is that Democrats are finally beginning to question the wisdom of basing their fortunes on identity politics.” Perhaps. But when will Krauthammer and his fellow conservatives question the wisdom of basing Israel’s fortunes on the identity politics practiced by Donald Trump?

Peter Beinart is a senior columnist and contributing editor at the Forward.