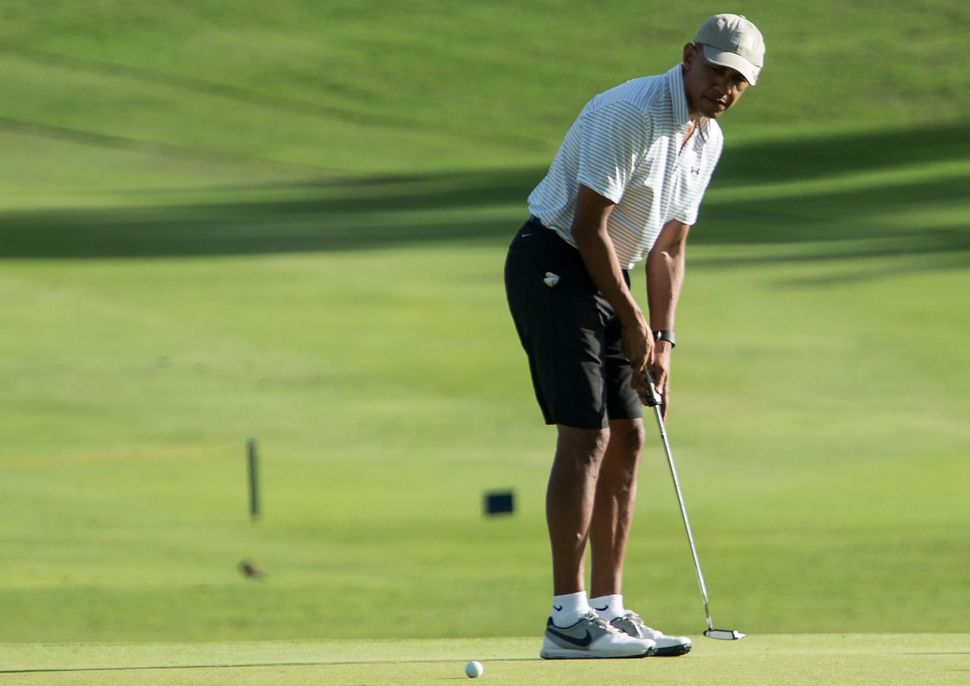 In 1924, Emory Keene, the proprietor of White Roe Farm in the Catskills, sent out a postcard about his lakeside resort, where the air was “pure and invigorating.” He pledged to meet trains if “notified in time.”

Keene added a last line, though: “Hebrews and consumptives not accommodated.”

I’ll tell you later how I know about that card. I think about it this week, because 92 years later, Woodmont, which one writer called the “Jewiest” Country Club in the Washington area, debates whether or not to block an invitation to someone who might join: President Barack Obama.

Not that Obama has shown any interest in applying for membership in the club. The mere possibility of inviting Obama was enough to ignite a campaign to block that because of something Obama hadn’t blocked: last month’s United Nations resolution about Jewish settlements in Israel’s West Bank.

Could this be? A club founded because despicable bigotry against Jews kept them out of such clubs would ban the first black president of the United States? Is this a sad irony or something more complicated? Actually, both. On one hand I think the protesters’ view is wrong. Not only has Obama been a friend to Israel in the classic way — most recently, his administration showered our ally with $38 billion in military aid — but by trying to persuade Israel to close its settlements to broker peace.

I agree with Obama. The fast pace of settlement expansion could help doom the two-state solution that represents Israel’s best chance for survival. If Woodmont really wants a friend of Israel, sign him up.

Besides, do these protesters want uniformity at Woodmont? What about barring people who can’t stand Benjamin Netanyahu? Who eat oysters? Who never go to synagogue? But I think the people up in arms about the protest are wrong, too — like Somerset, Maryland’s mayor, Jeffrey Slavin, who resigned from Woodmont to protest the potential snubbing of the president.

“I can no longer belong to a community,” he declared, “where intolerance is accepted, history is forgotten, freedom of speech denied, and where the nation’s first black president is disrespected.” Huh?

I want to like Slavin, whose heart is obviously in the right place (and, if his grandparents are of the Passaic, New Jersey, Slavins, may be my cousin).

First, this dispute stems not from race or religion or ethnic heritage. It’s about political views. Certainly those shouldn’t be out of bounds. What if in 1968, Lyndon Johnson wanted to join my club — or Richard Nixon, a few years later? I would have been in the front lines with a sign. Jews shouldn’t be obliged to stay silent about turning over their 18 holes to someone they think made life dangerous for Jews.

Second, if Slavin values “freedom of speech,” isn’t the best way to show that to make those who hate Obama’s policies comfortable speaking out? Isn’t the mantra of free speech advocates that we demonstrate that by letting those practice it who make us most furious?

And “history is forgotten”? I’m old enough to remember the sting of anti-Semitism. Tufts, my school, had fraternities like ATO that banned Jews. Those in charge didn’t hate my politics; they hated my ancestry. My roommate joined ATO. He was embarrassed that I couldn’t — but not too embarrassed to pledge somewhere else.

But this is not a case where “history” is forgotten.

This issue does involve disrespect for Obama. But it’s the opposite of what Slavin thinks. For his entire presidency, and especially this year, Barack Obama has made clear not just his tolerance for, but also the importance of, debate. “Democracy doesn’t require uniformity,” he said in last week’s farewell address. “Our founders argued. Whether we have seen eye-to-eye or rarely agreed at all… these conversations have kept me honest, kept me inspired and kept me going. You made me a better president and a better man.”

I see in those words a message for Woodmont. Welcome the opposition. Debate it. Put it to a vote. If you respect Obama, do this his way.

Which brings me back to that postcard. I saw it because the year after it came out, my cousin’s father-in-law, Meyer Weiner, bought the place. The next year, he sent out a different card. He signed it M. Weiner, proprietor. Above his name he added one triumphant word: kosher. But that’s not the end of that story. For decades, people flocked to White Row. But in the 1950s they stopped. White Roe Farm folded. One time, I drove up there with Meyer Weiner’s son. The only thing left was half a brick wall. Is that sad? Yes — and no. Because what killed it was the growth of hotels and resorts in places like Florida, who thought admitting Jews was just fine.

My guess is, if Woodmont puts this issue to a vote, they’ll send Obama an invite. And because they respected free speech, I bet Obama would be more likely to accept. And because they did this the fair way, he would get to know them on Woodmont fairways.

Mr. Slavin: Go back to your club. Honor Barack Obama by taking part in the debate. Obama thinks argument made him a better man. For your fellow members — and you — it could do the same.

_ Robert Lehrman, who served as chief speechwriter to then vice president Al Gore in the White House, has written four novels and the highly praised “The Political Speechwriter’s Companion” (CQ Press 2009). More recently he as co-written and co-edited a new book, “Democratic Orators From JFK to Barack Obama” (Palgrave Macmilla,n 2016). He teaches public speaking and political speech writing at American University._