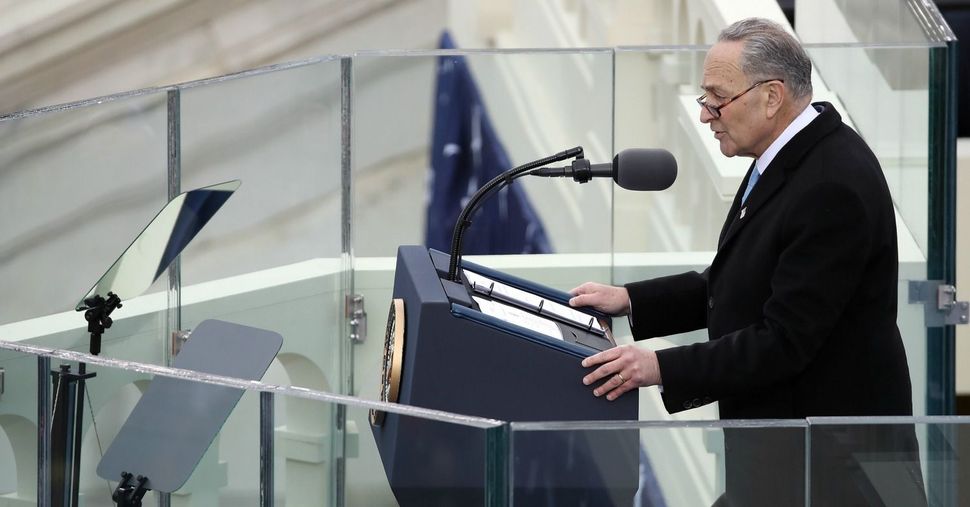 At times, looking for the Jewish angle in a major public event can feel small, parochial and petty. Not this time. The contrast between the two Jews on the podium, Senator Chuck Schumer and Rabbi Marvin Hier, and everyone else who spoke was quite striking.

Consider: Trump’s inaugural address. It offered a stark, angry picture of America as a wasteland that he intends to liberate from its role as the great hope of humanity. America first, America first. What kind of America? Gangs, crime, abandoned factories, broken border. The “trillions” we have spent (really?) on other countries while neglecting our own.

And perhaps his most shocking image, the impoverishment of the middle class while the benefits of economic growth were unfairly reaped by — Washington politicians! Somehow, it wasn’t the CEOs and bankers who accumulated trillions of dollars in tax cuts, booming stocks and sweeping reductions in corporate “labor costs,” meaning reduction in wages to boost profits and stock prices. No, it was those trillionaire IRS clerks.

By contrast, Schumer delivered a speech that spoke of pluralism, diversity and immigrants, and then transitioned to a reading of excerpts from that famously touching Civil War letter from Union officer Sullivan Ballou to his wife, pledging his life to defend — wait for it — the government. The reading was not just a lyrical tribute to patriotism — it was a subtle dig at Republicans who still quote Ronald Reagan’s “government is the problem, not the solution.”

Schumer’s other subtle dig was his summoning the urgency of the North defeating the South. Now that the South has turned the tables and taken control of Washington, finally winning the Civil War 152 years after Appomattox, the Sullivan Ballou letter can easily be read as a Democratic rebuke and cri de coeur.

Consider: Five Christian clerics and one rabbi. The five Christians all offered benedictions that varied between two themes: one one hand, asking God’s blessings on America and the Trumps; on the other hand, declaring the importance of personal faith in Jesus as the only path to redemption.

It was left to the sole non-Christian, Rabbi Marvin Hier of the Simon Wiesenthal Center and Los Angeles Museum of Tolerance, to quote the parts of the Bible that remind us of our duties to our fellow human beings, our obligations as a society to the poor, the weak and powerless. Hier, a conservative-leaning Orthodox rabbi, has been under pressure for weeks from Jewish leftists to make a bold statement at the inaugural and speak up for social justice. I don’t think they expected the rabbi to deliver, but he did — elegantly.