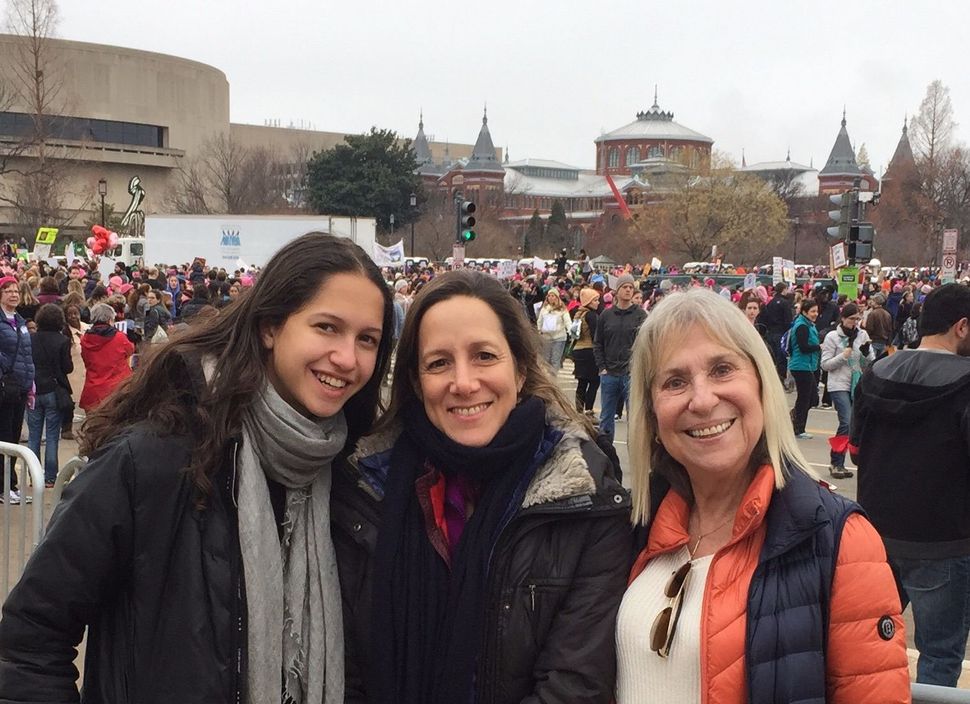 The Forward asked three generations of the Pogrebin family to recount their experiences at the Women’s March in Washington, D.C. Here the grandmother, a veteran feminist activist and writer, describes how this protest left her soaring. Read daughter Abigail Pogrebin’s account here and granddaughter Molly Shapiro’s essay here.

Pardon the hyperbole but yesterday was one of the best days of my life.

From the minute I stepped foot in New York’s Penn Station at 5:30 am and saw throngs of women (and men and kids) with pink knitted pussy ear hats — and my friend Gale Robinson took out her sign “Tweet Us With Respect” — until 5:30 pm when my daughter, Abigail, granddaughter Molly and I rolled into Washington’s Union Station and I ran into the same little African-American girl I’d photographed 12 hours before in her “Nasty Woman-in-Training” T-shirt — I was soaring.

Call it an activist’s rush, the electrical charge that people like myself get from slogans, signs and solidarity. “This is what democracy looks like!” “This is just the beginning!” “We’re here, we’re strong, and we’re not going away.” As I yelled and shuffled along with the multitudes, I felt like I was carrying the legacy of past activists and merging it into the intoxicating reality of now.

But yesterday’s march was the payoff. As we gathered at 3rd Street and Independence Avenue, I saw a sign that said, “Mourning in America,” and realized that I’d been sitting shiva for our country since November 8. Now, however, I was re-energized, marching into the future with my daughter and granddaughter and a peaceful army of people of all ages who identified with every possible faith, race, gender and national origin and who were standing firm (since at times we were too jammed together to actually move or march) for everything that was right, and demanding that our government fulfill this nation’s promise.

Last week, some media outlets ran gratuitous, overblown stories of divisiveness among the organizers. (You try planning a worldwide movement without a moment’s disputation.) But, in fact, rather than adopt an exclusionary either/or agenda, this march became a dramatic demonstration of the power of both/and, of inclusion and unity, of mutual respect and the dignity of difference.

To quote the late poet Audre Lord, “We cannot have single issue movements because we do not lead single issue lives.”

Nonetheless, familiar individual issues — racism, sexism, Islamophobia, xenophobia, able-ism, heterosexism, immigration, education — were deservedly foregrounded in the signs and chants of wave after wave of marchers; and unfamiliar faces (at least to me) were given the microphone. (We were too far away to hear the speeches but I listened to a few on my smart phone) When I heard Angela Davis include the word “anti-Semitism” among the blights of hate speech, and when I saw my Jewish friend Jacob Bender standing with a Muslim man holding a sign that said “Muslims Support Justice and Equality,” I felt all was right with the world.

The themes and memes of “intersectionality” came into full flower yesterday and made sense to many onlookers for the first time. Instead of a competition of tears, or a hierarchical ranking of who’s-more-oppressed-than whom, the march embodied a multi-issue movement of unity and mutual respect. We saw it in people’s kindnesses to one another and in the simple of optics of race (the many hued faces as opposed, for instance, to the faces in the two choirs that sang at the Inauguration). And we saw it in the riot of placards that made us smile or cheer or slap high fives the few times we stopped on the sidelines to watch the parade pass by:

“Make American great again like it was last Thursday.” “You’re so vain (drawing of Trump). You probably think this march is about you.” “We The People” under a beautiful drawing of a woman in a hijab (headcovering) made half of the stars, half of stripes, of the American flag. “Leaders lead. Twits tweet.” “Post-menopausal women for reproductive rights.” “Free Melania!”

I loved every minute of the day, whether we were marching or standing still like stalks of asparagus tethered by a rubber band. When Abigail, Molly, and I finally dropped into our seats on the train, I was still pumping euphoria.

Feminism has been declared dead a thousand times since the beginning of the Second Wave but yesterday it was alive and kicking all over the world. Yesterday I was on my feet for hours but never felt tired. Yesterday I had a brand new contact high with hope. Or, as Abraham Joshua Heschel once said after participating in a civil rights march, “I felt my feet were praying.”

When I arrived home at 11 pm, I watched the news to find out what I’d missed on the stage. I wanted to hear the action agenda and rallying cries. I know all too well that passion without action is useless.

It’s too early to judge the ripple effect of this remarkable day but I was grateful to hear Michael Moore instruct the marchers to inundate their legislators with calls and faxes every single day. And I was thrilled to hear the warning that Carmen Perez, one of the co-chairs of the March, issued to the new President and members of Congress: “If you won’t let us dream, we won’t let you sleep.”

After nearly fifty years of activism, all I can say is, “Right on!”

Letty Cottin Pogrebin is a founding editor of Ms. magazine and the author of eleven books, most recently the novel, SINGLE JEWISH MALE SEEKING SOUL MATE.
.