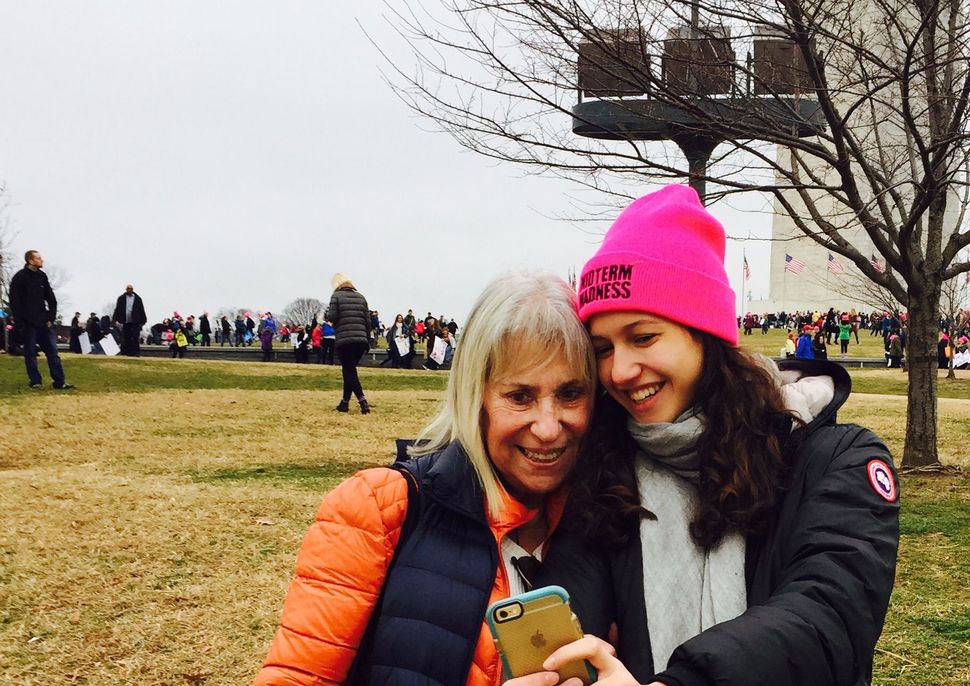 I was very focused on the food, the cold and the crowds.

And did I mention a terrorist bomb or crazed shooter?

Though I was entirely sure of my philosophical, visceral desire to sign on for the Women’s March in Washington, the notion of hordes amassing in one location triggered every one of my Jewish fears: being cold, hungry, or trampled. Or better yet, all three. And with my daughter at my side, no less, whom I’m ostensibly supposed to be protect.

So I deservedly fielded plenty of ribbing from my friends as I boarded our Amtrak train car Saturday morning, toting two cell phones, three chargers, an oversized bag of snacks (to be clear, I intended to share), and wearing five layers I intended to peel if necessary.

“Are you heading to the tundra, Abby?”

“You going on Outward Bound?”

My train car was a party. I didn’t expect to be that uplifted at five in the morning, when we all gathered to fill a train car arranged by my friend, Cathy Heller, (who happens to be one of the women groped by Trump back in the 1990s; it took great courage for her to tell it).

Within 15 minutes of our arrival at Washington’s Union Station, we all got separated. The crowds were enormous and there was no way to keep each other in sight in the sea of pink (the theme-color of the day) as we all tried to make our way to the stage where the speeches were starting.

In retrospect, I’m glad we didn’t get to the stage and missed the speeches, because for me, downloading them afterwards, they weren’t the point at all. The point was the masses. The point, for me, was the kindness, buoyancy and solidarity bursting — literally bursting — around us. A sea of riotous pink. Posters of every stripe that were not predominantly anti-Trump, (although I did love “We shall overcomb,”) but instead, pro-compassion:

“Be kind.” “This is what democracy looks like.” “Hate does not make America great.” “No human is illegal.”

That’s what I had come for: a plea — a cry — for empathy. A return to what I see as our country’s founding tenets of equality, dignity and collaboration. A promise not to unspool the hard-won equalities that have lifted all boats. I came to D.C. to help leave a visual mark for the incoming administration: don’t forget fairness. Don’t forget the righted wrongs, which were unworthy of America when they used to rear their ugly heads. Don’t forget the people who feel so afraid right now.

I am not an activist. That’s the truth and it’s not necessarily something I’m proud of. My mother was and is. She is outspoken, bold, and unapologetic. She believes what she believes to her core. She cannot bear injustice when she identifies it, and she has spent decades trying to ensure every citizen has a place at the nation’s table.

She and her colleagues in the Women’s Movement accomplished more than I can recount here, and I was the beneficiary. I grew up knowing only equality, and that’s no overstatement: I did not experience explicit sexism in my life, nor a world in which reproductive rights were not a given. I did not, and do not, share her pitch of outrage.

But this particular moment has shaken me. It isn’t any one Trump policy or cabinet appointment. It’s the harsh tenor, prejudice and coarseness that has been exposed, sparked by a leader who doesn’t seem to value preparation, self-education or empathy.

That’s what brought me to Washington. And while it was poignant to walk alongside a mother who was mourning all that could be unraveled, and alongside my daughter who has her entire future in front of her, I couldn’t be sure that the three of us were marching with one message. Other than hope. I do think we all felt there has to be – or perhaps, wanted to believe there can be – a sign of cohesion and positivity.

And lo and behold, there it was: in the stunning waves of women and men walking and chanting and climbing on scaffolding to see over the multitudes.

In the small kindnesses of one marcher helping another who was claustrophobic in the over-packed throng, or in one marcher offering to give another a leg up atop a police barrier to get a better view.

This day was not some utopian vision of unity; I didn’t subscribe to every placard or chant. But it was undeniably a dramatic snapshot of rare, vast camaraderie, and simple joy, after an election of unprecedented meanness and a dark vision of America.

Okay, yes: I brought too many layers of clothing and ended up schlepping most of them.

Yes, I brought too many packs of hand-warmers and ended up offering them up to strangers.

Yes, I had enough Kind bars to last me a fortnight, and no, I didn’t get stampeded or bombed. (Tuh tuh tuh.)

But when I looked out at the sea of people stretching in front of the White House through the mist, I hoped that Donald and Melania were looking out the window and at least thinking to themselves, “That’s a lot of people out there who are worried. That’s a lot of people walking peacefully with signs such as, ‘Make America Think Again.’ Maybe we should disprove them with compassion. Disprove them by leaving moral legislation intact. Disprove them by choosing to listen, even occasionally, to the thousands that poured into our new neighborhood the day after we moved in.”

With one of my multiple phones, I took a photo of my daughter and mother taking a selfie in front of the Washington obelisk. It struck me in that instant that they were both tourists and activists at the same time, and how grateful I was to be connected to both of them. And I felt for a flash, that maybe things need not be so ominous; that this demonstration and these two women were cause for optimism.

And then I tore open a Kind bar in case we didn’t get a chance to eat dinner before boarding the train home.

Abigail Pogrebin’s latest book, “My Jewish Year”, will be published in March.